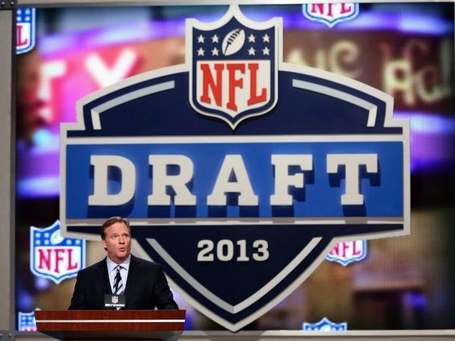 The NFL draft has really been the Bills Super Bowl over these past several years. It has been more exciting than the regular season and it's the best time of the year for Bills fan. Its the only part of the year in which we actually have hope. The NFL makes millions off the draft, and it brings in higher ratings than the World Series.

The draft is an interesting paradox, because in the normal world a potential employee has the right to choose which company or employer that they want to work for. Going to the wrong company can potentially side track a career, and hinder your development as a professional. Sometimes we take jobs that's closer to home and to our families; we may even take less money if it means we're going to be happier.

As we all know getting rid of the draft is NOT an option, the draft benefits the NFL way too much. But I'm sure if the players had a say, they would have preferred to choose which team they wanted to go to for various reasons. Quite frankly, the draft sucks for players.

So I wanted to use this Morning Joe to entertain the idea of a draft-less NFL. I'll briefly discuss an alternate option, and possibly the new landscape of the NFL if there wasn't a draft. I will also like to get your take. I'm not asking for you to agree or disagree with a draft-less NFL, rather to put your creative hats on imagine what the new NFL would look like and alternate ways of getting rookies to their new teams. I will like to hear your opinions and suggestions.

Time to Recruit. Just like in college and the real world, schools and companies recruit for top talent; the NFL should be no different. Hold up Bills fan, before you get all worked up. I know we have this inferiority complex, that no players want to come here voluntarily not unless we over pay them, but that might not be entirely true. When you have city kids willing to play sports in the "sticks", anything is possible. But lets look at what we know about recruiting:

Recruiter- The team that has the best recruiter gets their guy. If you got a person that can sell water to a well and fire in hell, you will have a great asset. Which means teams we will start employing top recruiting college coaches and or recruiting firms to help get the players they want. That's why it's not surprising to me to see Pete Carol and the Sea Hawks get these players in FA at a discount. The guys is a great salesman.

Facilities- It's nothing better than going to a company or school and seeing that they have top of the line facilities. We will start seeing better looking and family-friendly stadiums to help entice new rookies. Maybe a club in stadium a la the Miami Heat? You have to have something to draw young kids in; something that makes them want to come to your team and stay at the facility as long possible, so that they can work and stay out of trouble.

Tradition- Playing for a team or working for a company that has a track record of success is important. For rookies, being a part of a winner could mean more money in their second contract; ask Ellerbe and Kruger. Winning is what it's all about for these players, and being a situation where you can be a part of a winner and contribute is a players dream.

Opportunity- One major selling point for recruiters is the opportunity to be successful. For rookies, it would be an opportunity to play right away, whether it's as a starter or a rotational player. Andrew Luck will not go to the Packers for this very reason. But he would go to a bottom dweller if that meant he can play right away.

Location- Location is important when selecting a new team or company. Being closer to family and friends, or being in an area where you can enjoy being young and rich may be a selling point. Or you rather be somewhere isolated, so that you can focus on football and not have many distractions. Weather can also being a selling point; hot or cold weather could be a deterrence.

What Can You Do For Me?- Of course compensation is important. We all like more money and more perks. What is the team willing to do (within salary cap and NFL rules) that the other team won't do.

So how I do propose this will work? Quite simple actually, just some minor changes

2) Teams have to stick to their allocated funds for rookies, and operate within their normal salary restrictions

3) The recruiting process can not in no way interfere with NCAA rules, and can only start when the player declares

4) No extra cash or monetary benefits. A key to the city, parking spaces, street signs, and other perks are accepted

So how would this affect this landscape of the NFL

Well I think the NFL would look more and more like college. Why do players go to Alabama and Oklahoma and these other schools that aren't in "party" cities? It all starts with the head coach and their personality. It's no secret, the teams with the most talent wins. If I can recruit the best players to come play for me, I have a better a chance of winning. Guys like Urban Meyer and Chip Kelly has won at every stop they been at.

Okay, I'm interested in your thoughts. Let's hear it