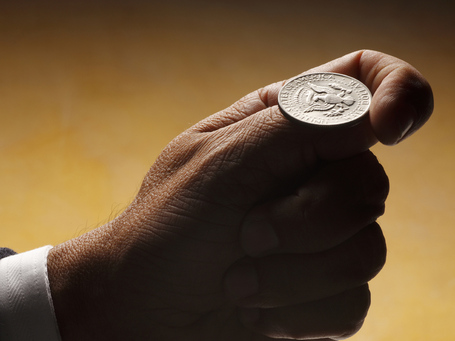 I really like today's Morning Joe! topic. Today we will be discussing this idea of parity in today's NFL. Parity is a word that we often hear on this site. We often hear that the NFL is parity-driven league, and on any given Sunday; David can slay Goliath.

The NFL does a great job (a la Buffalo Bills) selling hope. They like for us to believe that the bottom feeders of the NFL, can one day hoist the Lombardi trophy. They implement cap restrictions and an NFL draft that is "designed" to help the bad teams improve, and create an even playing field.

Fans throw the word parity around when they compare the NFL to others sports who aren't restricted by a salary cap; they say "Oh! The NFL isn't like baseball when the team who spends the most money always win, and the small market teams have no shot; the NFL has parity". You all have heard the argument before.

Well does parity really exist in the NFL? First we would have to define parity? According to Webster, parity can be defined as the quality or state of being equal or equivalent. Now of course, one can't expect this to be the case in the NFL. We don't expect every team to be 8-8 every year. Like in any statistical analysis there are always outliers; one or two anomalies that can throw off your findings, but for the most part there should be some level of consistency. Just like flipping a coin, if we a flip a coin 100 times, no one really expects for it to land on heads or tails 50% all the time; nor do you expect for it to land on it 80% of time. A 5-10% delta at the most is expected.

But before we get in to statistics, let's just try to predict the 12 playoff teams and the 12 bottom feeders for the 2013 season shall we.:

Now this is off the top of my head. Of course your list maybe slightly different, minus 1-3 teams from each list may be even 4, but for the most part this about 75-80% of you guys list, right?

If any of the "bottom feeders" make the playoffs, we all will be a little surprised, even more surprised if they actually won the Super Bowl. If any of the "playoff teams", made the playoffs or won the Super Bowl, there wouldn't be much of a surprise. There are 8 other teams that can easily fall in to either of these categories, but the chances that either a "playoff team" or a "bottom feeder" can be mistaken for one another; it's a very slim chance.

"But DoctorK44, that's not fair. You basically just looked at the standings from last season and predicted both the playoff teams and the bottom feeders".

Here are some statics for the past 10 NFL seasons:

-In the 10 seasons in which a team had the ability to make the playoffs; 62% of those teams has made the plays less than 50% of the time.

Okay so lets recap a little. We can pretty much predict from within a 75-80% accuracy the fortunes of 75% (24 out of 32) of NFL teams. We can do this not because of their success over the past few seasons, but from their success over a larger sample size of 10 NFL seasons. If we go back to original definition of parity and account for the outliers, the above statistics contradicts the idea that the NFL is a parity league.

Success can't be determined by the actions of the league, success starts within the organization. Success isn't about having the most talented players; success is about getting that player and providing him with the coaching and the environment to be successful. Putting good players on poorly ran teams is not the answer. Have you ever wondered why you have so many QB bust? These guys were number one overall for a reason, they just happen to go to a poorly ran team.

I'm curious to see what you guys think. Feel free to agree or disagree. I compiled my stats from two sources, NFL.com and pro-football reference.

Is there a such thing as parity in the NFL?