We asked Buffalo Bills fans on Twitter and here at Buffalo Rumblings to submit pictures of their most regrettable jersey purchase. You folks didn't disappoint. You'll see @BuffRumblings and @MattRichWarren in these tweets, of course, but Tim Graham (@ByTimGraham) of The Buffalo News got into the act, as well, and sent our message to his 16,600-plus Twitter followers.

I put your submissions in order of my personal opinion of least to most regrettable. Feel free to do the same in the comments.

Yeah, he was a bust of a first-round pick - but buying the first rounder's jersey is what the team pushes.

Tim emailed us about this with the following caption: "People always think its some kind of Andre Reed misprint." 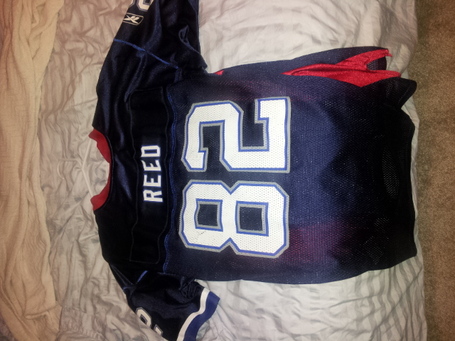 It's regrettable that people don't know who he is. He is third in games played for receivers and fifth in receptions in team record books. But longevity doesn't make him great, and his 10 touchdowns are astoundingly low.

He's worth millions, so I get it.

A lot of fans buy the starting quarterback's jersey. But it's been 12 years since he suited up for Buffalo, and having two of those without changing the nameplate for a dozen seasons is pretty regrettable.

After his rookie season, Hardy was forced to switch numbers by Terrell Owens. Which reminds me - nobody sent me a T.O. jersey for this post.

Double entrendres aside, Wang was a joke. He "played" in six games for Buffalo. Now you're stuck with a big, regrettable piece.

He started 14 games as a rookie - prompting, apparently, a surge of jersey sales in select parts of the fan base - then didn't even make the roster the season following his selection as a fourth-rounder.

@MattRichWarren @BuffRumblings My only two and both players changed their numbers after their rookie season. pic.twitter.com/NLrncu9sUt

@MattRichWarren Got this McGahee altered to a Spiller...the next day he changed his number pic.twitter.com/6PWFZZrugk

Separately, these aren't really regrettable. Bad luck can happen. But when both former first-round picks changed their number in consecutive off-seasons and left fans with outdated stitches, that stunk for a lot who bought the jerseys.

Getting a custom Young jersey before he even makes the team is gutsy. It... didn't pay off.

So what's the answer? How should you change regrettable jerseys? You can get new nameplates to sew on over big mistakes, donate to your favorite local thrift shop so Macklemore can rap about it, or you can do what this guy did:

@MattRichWarren saw this dude at a game last season - loved what he did w his pic.twitter.com/Z80jMmOcgp