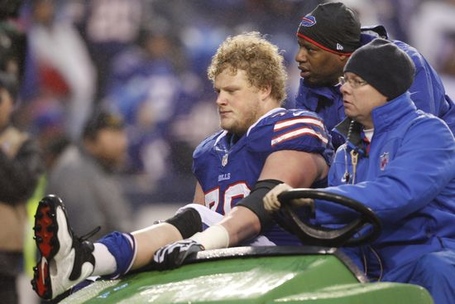 Fifth year pro and 1st round pick Eric Wood pictured here after suffering his third serious leg injury in three years after a 34-18 victory versus the Jaguars last season.

I hope you all had a great holiday, and had the opportunity to celebrate the birth of our great nation with family and friends. For today's Joe! I will like to give you all an opportunity to express your frustrations with any Bills player that you feel isn't living up to your expectations; for me it is C/G Eric Wood.

Disclaimer: I have no problems with Wood as a person or teammate, but my frustrations is purely based off of his on-field performance.

A first round draft pick in the 2009 draft out of Louisville, Wood was considered one of the best Centers in the draft along with Cal Center Alex Mack. Known for his elite strength, durability and versatility; Wood signed a 5 year $12 mil contract with the Bills, and he along with Andy Levitre was expected to be the future interior OL for the Bills.

In his rookie year Wood started at Right Guard, next to then Center Geoff Hangartner. In his 10th game; Wood suffered a gruesome leg injury. He had a compound fracture of the tibia and fibula, which subsequently ended his rookie season. In his second season (2010); Wood returned to the team at Right Guard and missed two games because of an ankle injury. In his third season (2011), he took over at Center full time as he replaced Geoff Hangartner, and once again failed to complete a full season due to injuries. This time he missed 7 games due to a torn ACL in his right knee. Last season, Wood missed 4 games due to a torn MCL in his left knee.

According the Brian McIntyre, who is the Around the League writer for NFL.com; Wood actually has been losing money due to his inability to stay healthy. Wood who is going in to his contract year this year, will like to prove to the current regime that he can stay healthy and be an all pro Center that we all hoped and expected. However, I'm not to optimistic.

For me, my patience is wearing thin for Eric Wood. No matter how good he suppose to be, or how good he is made out to be, the fact that we can't depend on him to play a full season really have me questioning his value to this team. I'm constantly told how good he is, yet he has no pro bowls or accolades to show for it. Nationally, he isn't regarded as one of the top guys at his position, and to me he's pretty average.

Now I must admit, I really don't pay too much attention to the OL when I'm watching games. Our passing attack over the past few years has been a quick passing attack, and our rushing attack has been more finesse than anything else. So I'm not sure if the players should get the credit for our success or the scheme, but overall I did feel that our OL was a bit overrated. I also don't pay attention to the various sites that rates players by some weird formula.

But regardless of all of that, you have to be available, and Wood has frequently been unavailable. In my opinion, the chances that he is resigned next season is very slim. Considering that we didn't even bother trying to re-sign our best and most durable OL this off season; it leaves very little hope that Wood can convince OBD that he deserves a second contract. With his injury history, how much good football does he have left? At some point those leg injuries has to catch up to him; if already hasn't.

Okay Rumblers it's your turn. Did I strike out with my assessment or do you agree with the Doc? Which current Bills player hasn't live up to your expectations?