Once thought outlawed by the NFL, Buffalo Bills fans will be able to use seat cushions this season at Ralph Wilson Stadium.

Your butt might be able to stay toasty at Ralph Wilson Stadium after all, Buffalo Bills fans.

In June, the NFL released new guidelines for what fans can bring into the stadium. In an effort to "improve safety," most bags were outlawed so people couldn't bring illicit materials into the stadium. Buried in that report, the NFL also outlawed seat cushions, which led to an outcry from Buffalo and other cold-weather cities where sitting on freezing cold metal benches can literally chap one's behind.

"Prohibited items include, but are not limited to: purses larger than a clutch bag, coolers, briefcases, backpacks, fanny packs, cinch bags, seat cushions, luggage of any kind, computer bags and camera bags or any bag larger than the permissible size," the statement reads.

According to a letter sent to Bills season ticket holders, the NFL may have made an exception for fans in these cold-weather locales, at minimum. Here's a snippet from the letter sent to ticket holders last month. It clearly explains the ban on most bags and uses the same language as the press release. On seat cushions, however, it differs. 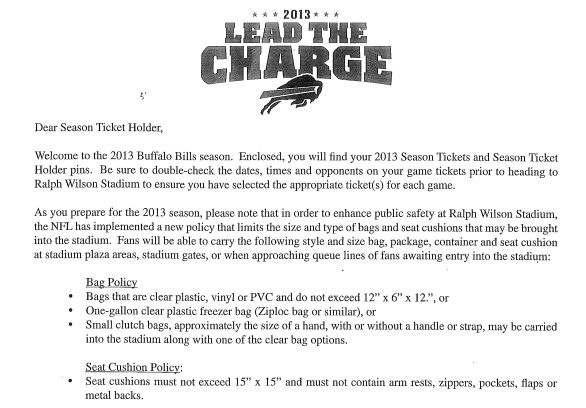 On the NFL's website announcing the new rules, seat cushions are still prohibited. We won't speculate further, but the Bills letter to season ticket holders clearly notes the acceptance of the cushions in Ralph Wilson Stadium. You can see the entire season ticket holder letter (in PDF format) here.