The Buffalo Bills released their first official depth chart of the 2013 season prior to Monday night's scrimmage, and we have some thoughts on the matter.

Just prior to last night's scrimmage (read our live blog and practice report if you're interested), the Buffalo Bills released their first official depth chart of the 2013 season. The first depth chart of the season is almost universally straightforward with very few surprises, but you can check it out here (via BuffaloBills.com), and we have just a few things to discuss about it.

That's the question I've heard more frequently than any other about this depth chart, and the answer is simple: Mike Pettine will use a wide array of defensive fronts, such that lining these players up in any front in a depth chart won't be truly representative of what we'll see in 2013.

If it helps you at all, think of that 4-3 as more of a 4-3 Under, which we discussed in several posts (like this one) earlier this summer. The 4-3 Under is sort of a middle ground between a 4-3 and a 3-4 in terms of the way the linebackers align. In the screenshot below, we've taken the Bills' front-seven starters from their depth chart and slotted them into that hybrid front, in the hopes that it alleviates a little confusion. 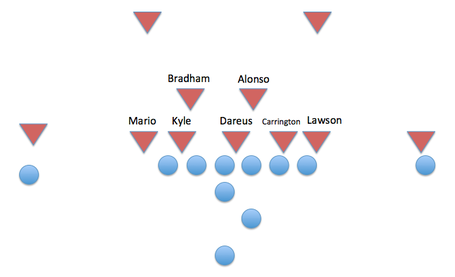 At both quarterback and left guard, head coach Doug Marrone listed two starters: Kevin Kolb and EJ Manuel at quarterback, and Colin Brown and Doug Legursky at left guard. The implication, of course, is that both of those positions are still wide open as far as a starting job goes.

It's interesting, then, that the same wasn't done at other positions. Alex Carrington slots in ahead of free agent signee Alan Branch as the third defensive lineman. T.J. Graham is ahead of rookie Robert Woods at receiver (though that's likely irrelevant in three-receiver sets). Nigel Bradham has no problem staying ahead of Bryan Scott and Marcus Dowtin at linebacker. These are not exactly surprising, of course, but it may also be time to admit that the Bills really only have two full-time starting jobs up for grabs at this point.

A few odds and ends

Chris Hairston, who is dealing with a back injury at team facilities and is on the field for each and every practice, is listed as the fourth-team right tackle. Jairus Byrd, meanwhile, is listed as a starting safety despite his never having even met the new coaching staff yet. Hairston's no fourth-teamer, and Byrd won't simply walk into the starting lineup when he returns to the team with zero experience in Pettine's system (though it likely won't take him long).

Speaking of the safety position, it's odd to see second-teamer Mana Silva listed ahead of third-teamer Duke Williams. If Silva gets onto the field ahead of Williams during the regular season, I'll eat three shoes.

The receiver depth chart is interesting, with Brad Smith and Chris Hogan both listed ahead of Da'Rick Rogers. That shouldn't be surprising - Smith's a veteran, and Hogan has apparently had a sneaky-good camp (WGR 550's Joe Buscaglia has mentioned him a bunch) - but with all of the hype Rogers gets, it's still a little jarring to see.

Aside from that, there really isn't much to write home about. What caught your eye, Bills fans?