Bills vs. Panthers: will Carolina blitz EJ Manuel more than New England did?

The New England Patriots were content to limit the number of blitzes they called against EJ Manuel, who had a solid NFL debut against them. Will the Carolina Panthers follow suit, or crank up the pressure in Week 2?

Share All sharing options for: Bills vs. Panthers: will Carolina blitz EJ Manuel more than New England did?

By and large, Buffalo Bills fans have seemed pretty impressed with the NFL debut of rookie quarterback EJ Manuel. In Sunday's 23-21 loss to the New England Patriots, Manuel completed 18-of-27 passes for 150 yards with two touchdowns, no interceptions and a quarterback rating of 105.5.

One of the reasons Manuel was able to perform with more efficiency than might have been expected: a clean pocket. Manuel was not sacked in his first game as a Bill, only had to use his mobility to escape a tough spot once or twice, and we can count on one hand the number of times Patriots pass rushers hit him. Bill Belichick and the Patriots were mostly content to sit back in their defense and let Manuel operate, rather than forcing the issue by sending a lot of blitzes.

Bills head coach Doug Marrone was asked on Monday if the low-pressure approach from New England surprised him.

"No," the head coach said. "We went back and we looked at some first time starting quarterbacks against them, and there was a little bit of that, but that's really now what you have seen from them. Not to say that - I think they do do a good job of really trying to change it up. I think you saw that they gave us a pressure type of look."

One such instance in which the Patriots did show pressure pre-snap came early in the third quarter, on a 2nd-and-7 in New England's red zone. Buffalo spread the field with four receivers wide, a tight end in-line and an empty backfield, and the Pats responded by crowding the line of scrimmage with six potential pass rushers. (They'd rush five of those six, as you can see in the second still below.) 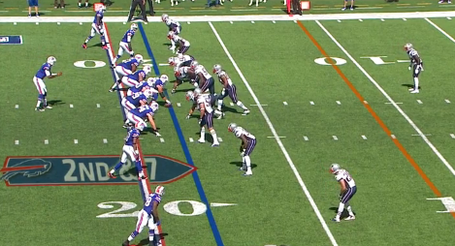 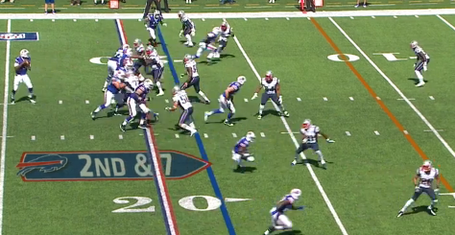 Manuel burned the look for an 18-yard touchdown pass to Stevie Johnson - and the called route was all on Manuel, per Marrone. (You can see Johnson lined up in the slot to the left side of the formation in the still above; he ran a simple go route up the seam.)

"We give the quarterback some different types of options to check to, and that was one of the things I was pleased with with EJ - he wound up being able to go ahead and check to something," Marrone said. "That's when he hit Stevie with the touchdown. That was good poise by him, and a good decision."

The NFL has not yet released the All-22 coaches' tape from the Week 1 slate of games, so we're anxious to take a closer look at how Manuel handled pressure beyond this one play. It will be interesting to see, however, if the Carolina Panthers - who have an excellent defense, particularly in the front seven - will follow New England's lead on the blitzing front, or if they'll crank up the schemed pressure on the rookie signal caller.