Cam Newton had a career-low passing day against a very good Seattle defense in Week 1, but the Panthers' offense will present a large number of challenges for the Buffalo Bills in Week 2.

Cam Newton and the Carolina Panthers are headed up to Orchard Park this Sunday, and the Buffalo Bills will have their hands full defending Newton and a Panthers offense that is coming off of a very slow start in a 12-7 Week 1 loss to Seattle.

In that defeat, Newton passed for a career-low 125 yards, threw one touchdown, and added 38 rushing yards on five carries. Running a conservative and somewhat predictable offensive game plan, Newton and the Panthers' passing attack were largely held in check by Seattle - but the Panthers did leave some opportunities on the field. Let's hit the tape.

Carolina's game plan on offense was very heavy on involving Steve Smith and Greg Olsen in the passing attack. Seattle knew it, and the Bills will know it entering Week 2. Here's one example of how Newton was too locked in on his top target, missing an opportunity for an even bigger play.

Olsen, the star tight end, is running up the left seam against zone coverage. The cornerback is well outside of Olsen's position, and the safety in the middle of the field, Earl Thomas, has his hips turned toward the right side of Carolina's offense. 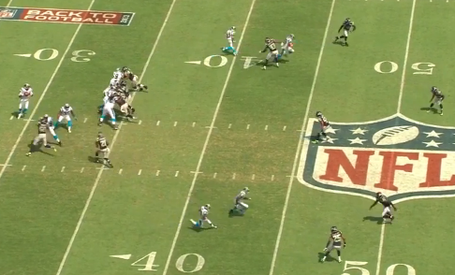 Newton is baited into throwing to his first read, Olsen, by Thomas' positioning. As Newton sets his feet, Thomas flips his hips and begins closing in on Olsen's route. Meanwhile, on the other side of the field, there's been a bit of a mix-up between safety Kam Chancellor and cornerback Richard Sherman. Chancellor moves downhill to take a receiver at the sticks, and Brandon LaFell is about to break towards the middle of the field on a post route that will be wide open. 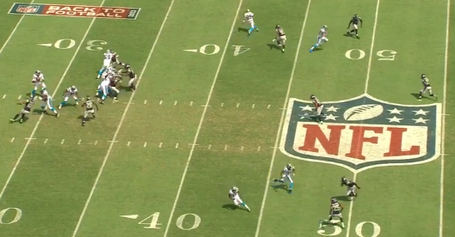 Look at LaFell (below, even with Olsen on the 50-yard line at the bottom of your picture) - he's uncovered. Newton has already taken the bait, and the pass to Olsen would be incomplete, but one quick peek on tape earmarks this as a play that the Panthers can return to later in the game. If Newton - not pressured on the play - picks up on Seattle's game sooner, a pump-fake to the left and a toss up the middle of the field may very well result in a touchdown. 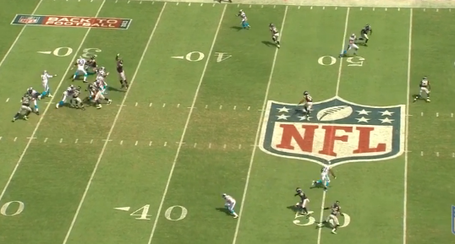 Later in the fourth quarter, Carolina returns to what we saw earlier in the game - except this time, Olsen and LaFell are lined up on the same side of the field. Olsen comes off the line up the seam and runs from hash to hash, taking a linebacker in coverage and turning the safety's hips. Meanwhile, LaFell runs into the vacant territory up the opposite seam.

This was good design based in part on what the Panthers saw coverage-wise from Seattle earlier in the game; it wouldn't have resulted in a touchdown - the corner in deep coverage read the play and broke off to meet LaFell as the ball arrived - but it could've been a big gainer in a tight ball game. Newton, however, airmailed the throw; LaFell had no chance to reel it in. 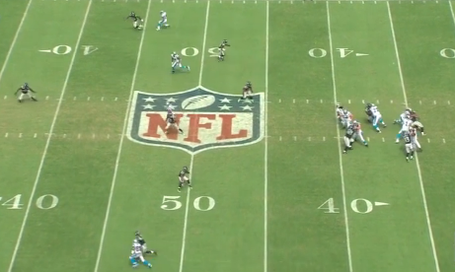 If you've watched any read-option offense at all, you'll see plays run in each and every one of them - including in Buffalo, who run a variation of the design you see below with 11 personnel, targeting a strong-side tight end. Carolina can run this bread-and-butter plays with ease, because they spend time early in games calling designed runs for the quick and powerful Newton.

This read is simple: Newton fakes the handoff...

... Seattle's linebackers are frozen in place by the threat of Newton running... 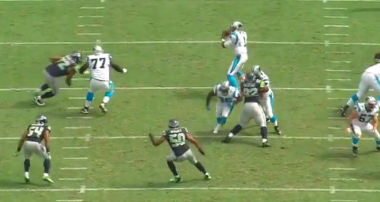 ... and their being flat-footed opens up a window for an easy pitch and catch from Newton to Smith. This was the easiest first down that Carolina picked up all day. You can expect more of this on Sunday against the Bills, especially if Mike Pettine dials up his usual level of aggressive blitzing. 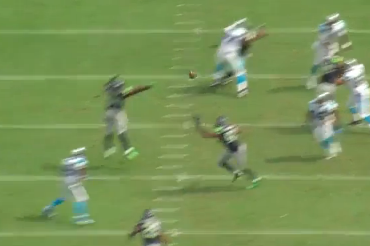 While Seattle was certainly cognizant of Newton's running ability, they did not appear to scheme up anything special to try to slow down that facet of his game. Newton isn't in the old-school Michael Vick mold, where he runs at his first opportunity; he's a pocket passer that can make plays with his legs if a play breaks down. With that in mind, Seattle rarely kept a spy on Newton, instead dedicating that player either to the pass rush or to coverage. Newton had a couple of nice scrambles, but they obviously weren't anything that crippled Seattle defensively. I don't expect the Bills to spy Newton, either.

Carolina really needs to diversify its passing attack in terms of which players are being targeted on a particular call. Including plays that were called back do to penalty, Newton targeted Panthers receivers 25 times (with one throw-away). 18 of those 25 targets were split evenly between Smith and Olsen, while DeAngelo Williams (three), LaFell (two), Ted Ginn and Mike Tolbert (one each) gobbled up the table scraps. Seattle had a fairly easy go of it on Sunday because they had a very good idea of where the ball would be going. Bills fans should expect Mike Shula and the Panthers to try to spread the ball out more on Sunday.

At their best, the Panthers are a run-first offense that takes shots deep down the field - and they've got the personnel to do this, particularly at quarterback, where Newton can participate actively in both facets of that game plan. Given how well New England ran the football against Buffalo in Week 1, look for the Panthers to try to establish DeAngelo Williams early (sprinkling some Newton in to set up the read-option game), then take shots deep down the field against Buffalo's depleted secondary. It's a tried-and-true NFL game plan, but with the read-option element mixed in, it theoretically makes Carolina very difficult to match up against for any defense.