Stevie Johnson was uncovered when he hauled in the Buffalo Bills' game-winning touchdown reception against Carolina - even though the Panthers had seen that exact route combination on a key play earlier in the game.

How did Stevie Johnson get so wide open on his game-winning touchdown play against the Carolina Panthers on Sunday? The answer is simple: Carolina had a miscommunication in the defensive backfield between a player that had seen the same play run earlier in the game, and a player that hadn't.

Tim Graham of The Buffalo News has an excellent post up today about "Two Right Smack," the play call that not only secured the decisive points in the Buffalo Bills' 24-23 win over the Panthers, but also a critical two-point conversion to tie the game in the third quarter. Read that post first, then come back here to take a look at the tape. 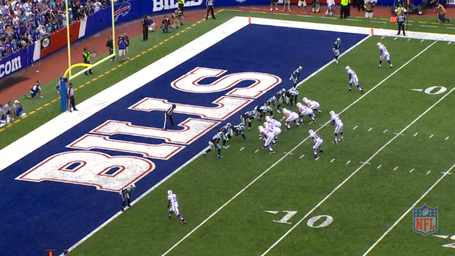 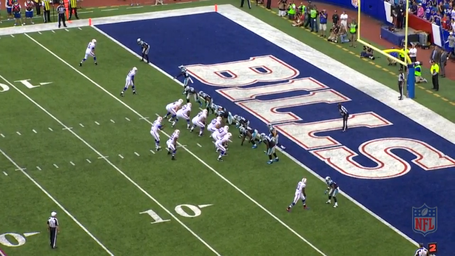 Above, you see the alignment for the game-winning touchdown - and that it's flipped, with the play run to the left side this time. Johnson is again in the slot, covered by Moore. Chris Hogan is split out wide this time, and he's covered by Josh Norman, a backup that was forced into the game via injury. Chandler is on that side of the field, as well. 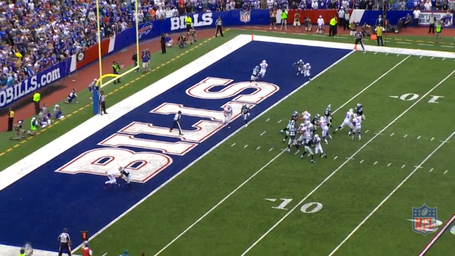 Back to the two-point conversion. As Johnson and Woods run their route combination - Johnson runs an out to the sideline, while Woods slants to the middle of the field underneath Johnson's cut - Moore follows Johnson, while Munnerlyn sticks with Woods. Both receivers are open on the play, but EJ Manuel takes the easier throw, hitting Woods on the slant for a fairly easy two-point conversion. 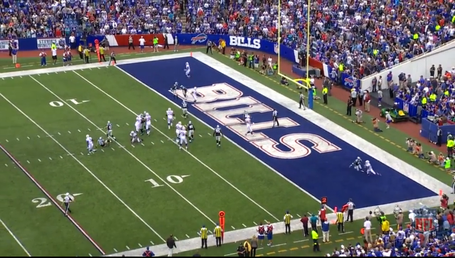 On the final play, Moore looks like he wants to defend the route combination differently this time: he knows first-hand that the Bills went to the slant on this call earlier in the game. He's all over it. Given the situation - six seconds remaining, no timeouts - he assumes that the Bills will again want to hit that slant, as it's the quickest route on the tree. Rather than playing man coverage and sticking with their receivers, Moore tells Norman - as detailed in the Graham article linked above (seriously, read it) - to take the corner route, while he can play inside leverage on the slant route and potentially register a pass break-up or a pick.

Instead, Norman plays it incorrectly - both he and Moore stuck with Hogan in the slot - and the rest is history. Moore had the right strategy and learned from what he saw earlier in the game, but a breakdown with a new defensive back on that side of the field led to the breakdown, and Manuel made what may very well end up as the easiest game-winning touchdown pass of his professional career.