The New England Patriots have defeated the Buffalo Bills in 18 of their last 19 games, and in 23 of their past 25 dating back to the 2000 season. Bill Belichick is 23-4 against the Bills as Patriots head coach, and Tom Brady is 20-2 against Buffalo as a starting quarterback. Their run of dominance over the Bills has lasted for more than a decade, and only rarely have the Bills been competitive in the series during that stretch.

None of that matters much to two key Bills rookies: head coach Doug Marrone and starting quarterback EJ Manuel. Both will make their NFL debuts in their current respective job descriptions when the Bills take on the Patriots in the 2013 season opener, as the duo spearheads what the team and its fans hope is a new and improved era of Bills football. A brand new coaching staff and 20 new players haven't been around to witness any of New England's dominance firsthand; their charge in Week 1 is to start the process of settling the score.

Keep up with all of our Week 1 coverage

Returning to the NFL after four years as the head coach at Syracuse University, one of Marrone's biggest tasks in Buffalo will be to become the first coach since Hall of Fame inductee Marv Levy to guide the Bills to a winning record (read: respectability) in the AFC East. Not even Wade Phillips, the last head coach to take the Bills to the playoffs, was able to swing better than a .500 record against the Bills' biggest rivals - and things have only gone downhill since his three-year run in charge.

Since their last playoff appearance in the 1999 season, the Bills are an abysmal 25-57 (.305) in the AFC East. As Marrone and the new regime try to end the team's 13-year playoff drought, their first order of business will be to turn around the team's fortunes in the division - and their first crack will come against New England.

While the Bills have been relegated to the cellar, the Patriots have dominated the division for the past decade. New England has won nine of the last ten AFC East championships (and in the tenth year, they tied Miami with an 11-5 record), and have made the playoffs in as many seasons. They enter the 2013 season having won 10 consecutive divisional games, a streak that dates back to September 25, 2011 - which just so happens to be the last time the Bills beat the Pats. 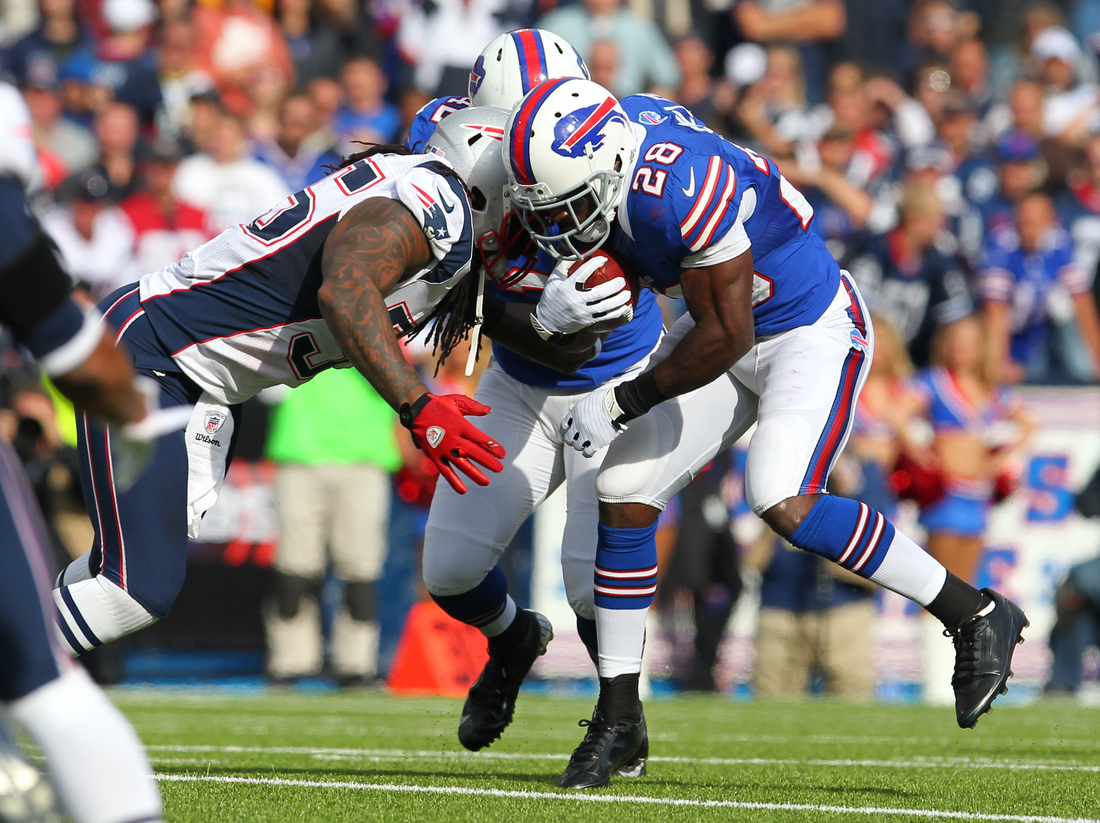 Surprisingly enough, the Bills have had a recent string of offensive success against the Patriots, relatively speaking. In their last four games against New England, the Bills have accumulated at least 400 yards of total offense and have averaged nearly 27 points per game. The Bills were still blown out by three or more scores in two of those contests, but they won a third and lost by six points in the other.

In the latest episode of the Buffalo Rumblings Podcast, we recap the Bills' busy preseason and preview Bills vs. Pats. Give it a download, and let us know what you think of the show!

Then again, this will be a different offense than we've become accustomed to watching attacking the Patriots defense. Gone is Gailey's pass-first spread offense; Marrone and 33-year-old offensive coordinator Nathaniel Hackett will implement a run-first attack that utilizes spread concepts and a little bit of read-option, but which is decidedly more conservative in nature than Gailey's attack despite its up-tempo nature. The Marrone/Hackett philosophy appears to be run first, pass to score and pack in as many plays as possible.

Belichick is certain to realize this, and as has happened in the recent past, his game plan will likely center around containing running backs C.J. Spiller and Fred Jackson as much as possible. Buffalo will be giving the ball to those backs a lot, but the Patriots will try to force Manuel into making mistakes with his arm in his first pro start. Forcing turnovers has been the lifeblood of New England's success in beating Buffalo over the last few seasons; the Bills have turned the football over a whopping 24 times in their last six games against the Pats, and that's a trend that Belichick will try to keep alive as he schemes against a rookie quarterback.

Brady is still behind center for the Patriots, and he's spurred New England to a high level of offensive output against Buffalo regardless of the talent level around him: in 22 career games against the Bills, Brady has thrown for 51 touchdowns (compared to just 17 interceptions) and has a quarterback rating of 103.

That said, there's an awful lot that's different for the Patriots' passing game this season. Brady's top pass-catcher, Wes Welker, left as a free agent for Denver. Star tight end Rob Gronkowski is doubtful to play in Week 1 as he continues to work his way back from offseason surgeries on his back and forearm. Aaron Hernandez is out of the picture with well-documented legal issues. Brady's new receiving corps features names like Danny Amendola, Kenbrell Thompkins and Zach Sudfeld - and the latter two are rookie undrafted free agents.

While Brady and his new cast of receivers (particularly the rookies) work out the proverbial kinks, look for the Patriots to emphasize their running backs in the offense. New England ran for a combined 364 yards in their two wins over Buffalo in 2012, with top back Stevan Ridley accounting for 204 of those yards along with three touchdowns on 44 carries. A lot has been made about the aggressive nature and exotic pass-rushing packages of the new Bills defense being installed by former New York Jets defensive coordinator Mike Pettine, but his most pressing task may be to shore up the league's second-worst run defense from a year ago. 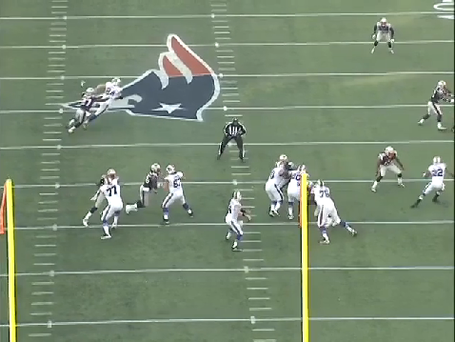 Offense review: The Bills had a lot of success attacking the middle of the field against the Patriots in 2012, using their running backs in different ways to open up real estate between the hashes and paving the way for players like Scott Chandler and Donald Jones to make big plays in the seams. We took a look at five examples of how the Bills exploited the Patriots up the middle earlier this week. 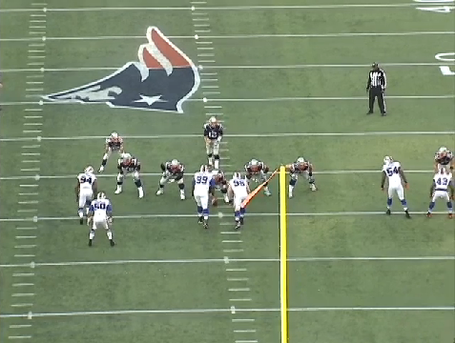 Defense review: After a Week 4 shellacking in 2012, the Bills borrowed some key concepts from Pettine and the Jets in an effort to slow down Brady when the teams met again in Week 10. In many ways, the pressure packages worked. We take a look at some looks that the Bills borrowed, one that they didn't, and what the Jets and Bills shared philosophically as they tried to scheme up ways to limit the effectiveness of the Patriots' offense.

Shane Vereen, running back. In two career appearances against the Bills, Vereen has five rushing yards on six carries, and 16 receiving yards on two receptions. Why, then, is he a sleeper in this contest? Because of his new role in the Patriots' offense, in which he's used not just as a change-of-pace back, but on screens and out of the slot as a receiver. Versatile backs in New England's offense have given the Bills fits for years. Kevin Faulk still haunts the dreams of many Bills fans. Just last season, runner/receiver Danny Woodhead accumulated 84 yards and three touchdowns on just seven touches in his two games against Buffalo. No one's sure yet exactly how big a role Vereen will have this season, but he is absolutely capable of giving the Bills headaches by making big plays out of a small role - the same way Woodhead did for three years.

Devin McCourty, safety. You may remember McCourty as the Patriot that made the game-clinching interception to beat Buffalo in Foxboro last year. Or as the player who picked off two passes as the Pats were running up the score on the Bills in the second half of a Week 4 blowout last season. The former first-round pick out of Rutgers has been New England's best defensive playmaker against Buffalo of late, recording four interceptions in his last three games against the Bills. You can bet that Marrone, Hackett and Manuel will know where he is on every down on Sunday. 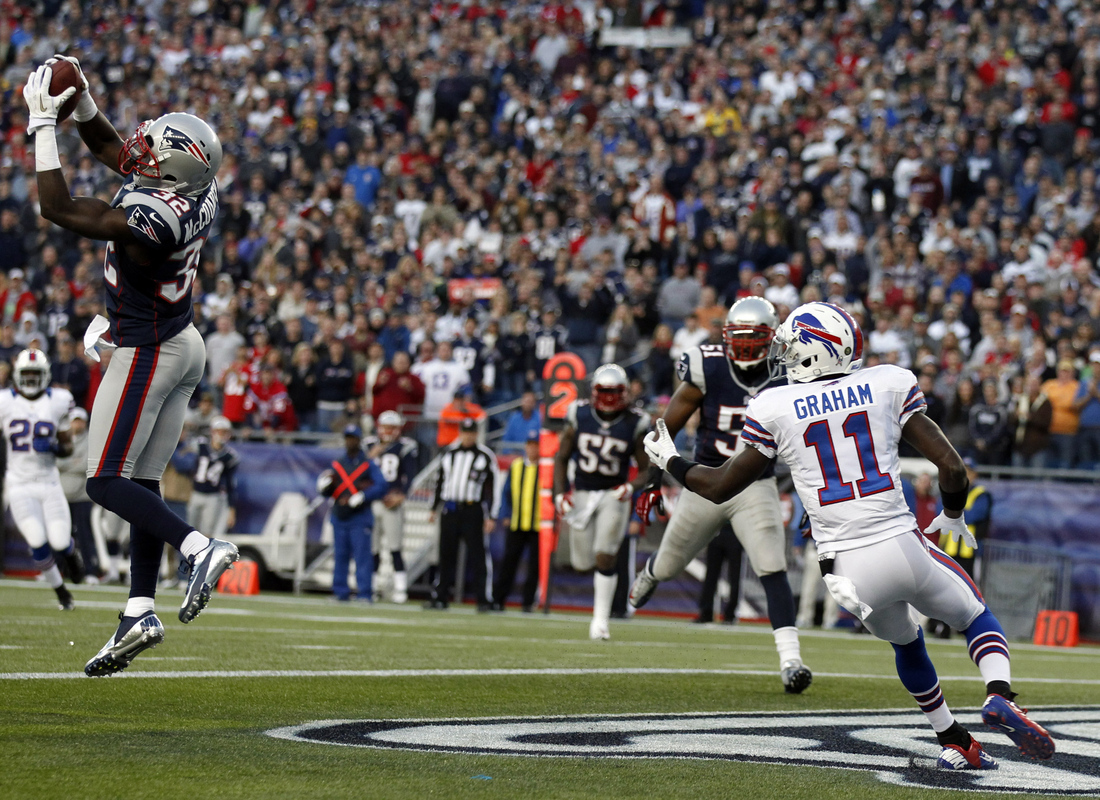 Robert Woods, wide receiver. The Bills knew that they needed a receiver that could take attention away from Stevie Johnson on the other side of the field, and Woods is that guy. Not only that, but Woods may be the most natural fit for the West Coast theme of the team's passing attack thanks to his excellent after-catch running ability. While opposing teams focus on the bigger and more established names (Spiller, Johnson and Jackson), don't be surprised if the underrated Woods starts his rookie season off on a high note.

Jerry Hughes, pass rusher. Acquired in an offseason trade with Indianapolis, Hughes - considered a first-round bust by the understandably frustrated fan base in Indiana - put together an excellent preseason showing with the Bills, and will be the team's top situational pass rusher heading into the 2013 season. Pettine will make liberal use of Hughes on passing downs, which leads us to two points: Hughes will be especially critical in a game where pressuring the quarterback is mandatory; and watch for the Pats to switch to no-huddle if they move the chains with Hughes on the field to take advantage of his struggles against the run. Hughes will have opportunities to make game-changing plays as an also-ran in Buffalo's big-name front seven.

Not only are there good reasons to be excited about the new direction of the Bills as an organization, but there are strong arguments to be made for the Bills giving the Patriots a run for their money right out of the gate despite being one of the youngest teams in the NFL. At the very least, this game promises to feature a lot of interesting wrinkles as fans begin to get a feel for what these new Bills are all about. Expect a much closer game than what most are expecting, but New England likely has too much established star power - which trumps Buffalo's youth - for the Bills to start the Marrone and Manuel era off on the right foot. Patriots 31, Bills 23