Will the NFL have a recruiting problem?

Youth football participation numbers are down. What does this mean for the NFL's future talent pool?

Share All sharing options for: Will the NFL have a recruiting problem?

This Joe has been a long time coming. When I initially posted the Richie Incognito and Michael Sam article back in February, my intentions were to discuss two other controversial topics at the same time, one of them being should we pay college athletes, and the other this one. Brian, being the great editor in chief that he is, advised me to tackle the two remaining topics individually in order to keep the scope as small as possible. He feared that too much could go wrong in the comments section with four gargantuan controversial topics.

I'm glad that he offered this advice, as it has given me more time to thoroughly flesh out my thoughts and frame the discussion in a way that wouldn't incite a riot in the comment section. The downside is a very lengthy and wordy post, so my apologies.

With that being said; today I want to discuss the idea that the NFL will have a problem recruiting kids to play football due to the long term physical hazards (CTE) of playing tackle football.

In the article, Pop Warner and USA Football attempt to justify the decrease in numbers by stating that the downward trend in youth football is due to the national economy, and the upward trend of youth specializing in other sports besides football is directly related. They refer to a survey that shows participation is on a decline in other team sports as well, such as baseball and basketball. Not everyone agrees with this theory. The organization's chief medical officer and former Pittsburgh Steelers neurosurgeon, Dr. Julian Bailes, believes that the primary drop in participation is mainly due to head injuries. He believes that parents are steering their kids away from football, due to concussions and other long term head injuries. He concludes that if the NFL doesn't address this issue, the trend will continue.

As I read through the article, I wanted to know if Dr. Bailes' theory was actually true. Are parents really keeping their children away from football because of head injuries? Is there a direct correlation between head injuries and youth football participation? If so, is this a early indicator to the NFL that they should start taking precautions to hedge against a possible smaller talent pool? Does the NFL have a problem?

In the attempt to answer the above questions, I needed to first find out two things. First: what type of kids play football? I'll expand on this question later. Second: what would prevent me (a parent) from allowing my own child to play football? I needed to find answers to these questions, because isn't this the very foundation of the argument? If the NFL truly has a problem, they either have a problem getting kids to play football or convincing parents to allow them to play.

What types of kids play football?

Like many of you, I played organized football as a youth. As a kid, I had some aggression issues. I would get into fights, and would constantly get into trouble at school. Football was an outlet for me, as it was a constructive way for me to release some of my frustration and aggression. I played other sports, but I preferred football.

The other kids that were on my team and in my neighborhood, played for other reasons besides the ones I had. Their parents signed them up to keep them out of trouble. Football was used to occupy their time and keep out of the gang infested streets. It was also used as a possible tool to get them to college and provide educational and financial opportunities that weren't offered to their parents. Many of my teammates grew up in single-parent home. Their mothers felt that their sons needed discipline, and felt that their son could benefit from a male role model (coach). In many cases, football was their only key to a better life.

Of course, some kids may have grown up watching the men in their family play football. They idolized Joe Montana and Dan Marino, and hope that one day that would play in the NFL. Some kids play football simply to get a jersey and wear the uniform. Some kids may not even recognize the brutality of the game, and purely play for the strategic aspect of the game.

Does the NFL Have A Problem?

Below is a chart of the racial demographics of players in the NFL as of 2012. 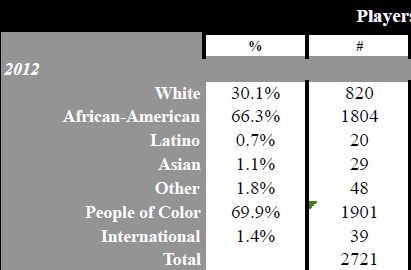 69.9 percent of the players in the NFL are people of color, which includes everybody that is not white. It's fair to assume that the breakouts for youth football players are pretty much the same. I'm going to focus my attention on the largest output: African Americans, which accounts for 66.3 percent of the NFL. If the NFL is going to have a problem, logic tells me that the problem starts with the group that moves the needle.

Stats can be found here.

Will the NFL have a recruiting problem?

The answer seems pretty simple to me. As long as there are poor black kids that are being raised by impoverished single parent mothers, who lacks the education that is necessary to steer their boys away from football, the NFL shouldn't have a problem. If you are a single mom that has no money, lives in a bad neighborhood, with a son that has the ability to play football, you are less likely to pull him away from a sport that might be his only ticket out from his harsh realities. The 9.5 percent drop in participation that is being reported can be due to many reasons. The cost to sign your son up to play Pop Warner football can range from $75-200, plus mandatory fundraising and additional equipment. Did we not just come out of a recession during 2010-2012, when this study was done? Could that have been the cause, as the leagues themselves reported?

I am aware that this analysis isn't ironclad; statistics alone should never be used to answer a question, but combine them with logic and experience, you can come pretty close. I am also aware that these statistics does not apply to all African American people, and that football is played by other nationalities. I'm using these statistics to reinforce my argument, not make it. Lastly, I won't dispute that parents are in fact pulling their kids out of football, but as one child leaves, another is there to take his place.