What's your return on investment for being a Bills fan?

We pay a lot of money to support the Buffalo Bills. Is the return on investment worth the price paid?

Share All sharing options for: What's your return on investment for being a Bills fan?

I know that you haven't heard from me in quite awhile, but with Mr. Wilson's untimely passing, Jim Kelly's cancer, and the free agency and draft rumors, I decided to step back a little and let Matt and Brian do their thing. However, some time has passed and I figured this is a good time for a Morning Joe!

As many of you know, I often share with you some of my personal experiences. I feel like the more I share, the better you will get to know me, and the more inclined you will be to share your experiences. Hopefully at the end of the day we grow as a community, and we learn from one another. After today's Joe, I'm hoping to get one question answered. Do you feel like you are being taking for a ride?

What do I mean? Based off all the time and more importantly the money that you have spent on being a Bills fan, do you feel like you are being cheated as a fan? If you would've asked me this question a couple of weeks ago I would've said no. However, some things have transpired, and now I'm not too sure.

Prior to the unexpected passing of Mr. Wilson, I was planning my trip to the Hall of Fame ceremony in Canton. My wife asked me, "Kent, how do we plan on paying for this trip? We have an allotted amount of money that we spend on the Bills per year, and this trip exceeds the budget." I explained to her, that this ceremony is important and this conceivably could be the last time a Bills player will ever be enshrined in to the Hall of Fame. She then asked, "Kent, do you realize how much money we spend on this hobby/infatuation of yours? What is your return on investment ? Does this make sense?"

Of course, I dismissed this; I just figured she just didn't understand. But I'll admit, the question was eating at me. So that night as I usually do, I went on the computer and I came across this site. The link is to an article by David Biderman from The Wall Street Journal. In the article, he discusses a study that the Journal did regarding the actual amount of time that the ball is in play during an NFL game. I'm sure many of you are aware of the study, but for those of you who aren't, it basically says that of the few hours that you spend watching the game each Sunday, only 11 minutes is actually spent playing it.

I included a graphic that breaks it all down. 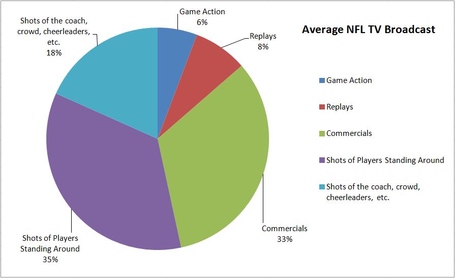 Armed with this bit of information, I was determined to do a little more digging. The next morning on Buffalo Rumblings, Matt posted his usual links post, and one of the articles were discussing the Buffalo Fan Alliance group. They are a group of Bills fans that happen to be businessmen, politicians, lawyers, media members, etc. Their primary goal is to keep the Bills in Buffalo. They plan to solicit us Bills fans for money, so that we can influence a potential owner to keep the Bills in Buffalo.

When I saw the article, I immediately thought of my wife's question. How much money or time should I be giving to something that doesn't provide any tangible benefits? I wonder if the reason why I was having difficulties answering this question was due to the team poor performance. If we were winning, would I feel differently? After reading the article, I decided to do a cost analysis. I wanted to see how much money I spent for this 11 minutes of agony (more times than not).

I decided to do an analysis that the average out of town Bills fans could relate to. Most of us try to make it to at least one home game, we pay for the Sunday Ticket, fly, rent a car, and we stay a couple of nights at a hotel. I didn't bother listing food and alcoholic beverages, because those items would've been consumed either way.

As you can clearly see, a majority of us spends over $1,100 a year for this hobby/infatuation of ours. Of course, some pay a lot more and a lot less, but I leave it up to you to conduct your own analysis if you're curious.

It's hard for me to fathom that I spend over $1,100 for something that gives me 2.9 hours (11 minutes over 16 games) of agony. I can't really think of any enjoyable experience that would last 2.9 hours, which I had to pay $1,100 for. Can you? Maybe drive around the track for three hours in a NASCAR stock car?

Lastly, to my good buddy Joe P, who constantly tries to convince me and others that the players are overpaid. For kicks and giggles, I decided to do an analysis for Mario Williams, our highest paid player. I wanted to see how much he gets paid per minute. I also wanted to see how much he cost the team every time he either made a play or took a play off. Since he is a defensive player, I assumed that he only played 5.5 minutes per game, and I assumed that he would actually collect every penny of his six-year, $96 million contract. I also assumed that the average play was four seconds in duration.

Of course, I didn't include OTAs, preseason games, and practice. There is no way to put a monetary value on that sort of stuff. The only thing that I was concerned with capturing, was the end result, the actual games. Mario had 13 sacks last year; we paid him $78,787.93 for those sacks. He had 38 tackles, so we paid him $230,303.18 for those. Can we all agree that he took off some plays as well? What's a fair number? Is four per game fair? That means we gave away $387,879.40.

After all of the research and the analysis, I still can't answer my wife's questions, nor can I answer my own questions. Therefore, I pose the questions to you. Do you feel like you are being taking for a ride? Based off all the time and the money that you have spent on being a Bills fan, do you feel like you are being cheated as a fan? What is your return on investment? Does this make sense? How much money or time should we be giving to something that doesn't provide any tangible benefits?