All of a sudden, many NFL rookies are millionaires. Are they crazy for spending wads of cash right away, or merely victims of circumstance?

The 2014 NFL Draft is over, and many of the players that were selected will be signing their very first NFL contract. It's an exciting time for them and their families, because their dreams are finally realized. Many will be experiencing a new city for the first time, new teammates, new coaches, new friends, and a totally new life. Unfortunately, they will be hit with many new challenges as well. The biggest challenge will be financial. How to save your money and say no to the very people you love?

Many people, myself included, often wonder how athletes can blow through millions of dollars. We (fans) often see the big signing bonuses and contracts, and say things like "this guy makes more money in one year than I have or will ever have made in my life time. You must be a complete idiot to blow through that much money. I have no sympathy for anyone that can go bankrupt after making millions."

Let's examine whether these athletes are truly idiots, or if they are just victims of circumstance and actually deserve some sympathy.

The below exercise is all speculative. I will make some assumptions and conclusions, that I'll try my best to explain and rationalize. Feel free to do your own analysis based off the guide that I created, or change it to fit what you think works best; in the end, let's see what you came up with. Here we go!

Let's start with Player A signing his first NFL contract. It's a four-year deal; $5 million signing bonus, with $15 million paid out over the life of the contract. As we all know, the $5 million is the only thing that is guaranteed. The moment he signs the contract, he gets $5 million. 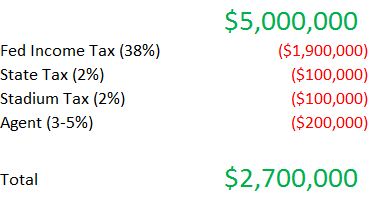 Uncle Sam gets his 38 percent off the top. The higher the tax bracket you're in, the higher the taxes you pay. Depending on if he plays in a state that has state taxes, he can expect another 2 percent to be taken off. Also, there is this thing called Stadium Tax. What are stadium taxes? It's basically a tax that states have written in to law, that tax athletes that suit up and play in their state. For instance, if Player A plays in nine cities in his first season, each city that he plays in taxes him, which would add up to approximately $100,000 for that first year (based off of $5 million).

Lastly, Player A hires help from an agent to negotiate his contract. An agent's fee is usually between 3-5 percent, so let's assume a 4 percent agent fee ($200,000). Now we are left with a net gain of $2.7 million from that $5 million signing bonus.

The very first question he will be asked is, "what is the first thing that you're going to buy"? Nine out of 10 times, the answer will be the same: "I'm going to buy my mother/parents a house." Look at the chart below to see how much it'll cost him. 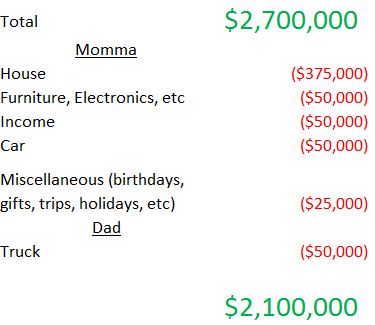 We all know that he can't buy mom just any old house. She raised him, changed diapers, took him to practice, cooked for him, and supported him. Mom needs her dream house. It's the least that he can do, considering all that she has done for him. Player A buys his mother a $375,000 house in cash. He doesn't want to deal with the hassle of monthly mortgage payments. What good is a house with no furniture? $50,000 is paid in furniture and electronics. He doesn't want her working that job anymore, so they agree on a $50,000 year stipend. She needs a new car, so he gets her a new $50,000 car. Birthdays, holiday, gifts, will cost Player A an additional $25,000.

Player A is a millionaire, and he's the one that put in all the hard work and made the sacrifices. The government got paid, the state got paid, his agent got paid, and his parents got paid. Now it is time for him to pay himself. Armed with $2.1 million, let's see what kind of damage Player A can do. 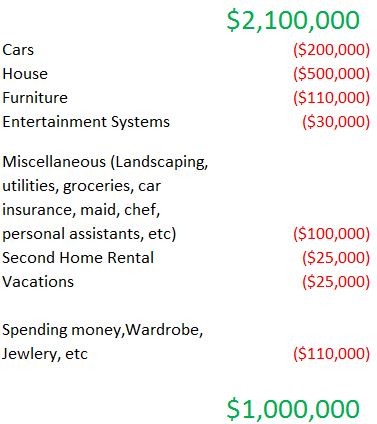 You can't put cheap furniture in a $1 million house. He'll spend an additional $110,000 in furniture and upgrades, $30,000 for the entertainment systems, and an additional $100,000 for landscaping, utilities, groceries, car insurance, maid, chef, personal assistants, and the rest.

Player A also has to look and dress like a millionaire. No more cheap and tattered clothing. If he is going be doing interviews and make television appearances, he has to upgrade his wardrobe. Tailored suits and expensive jewelry will cost him $110,000.

During his bye week and after a long tough season, it's time to take a vacation ($25,000). He invites his buddies, teammates, and some family members to join him. After all that spending, he has $1 million left. It is now time to refocus, take care of business, and take care of your dependents. 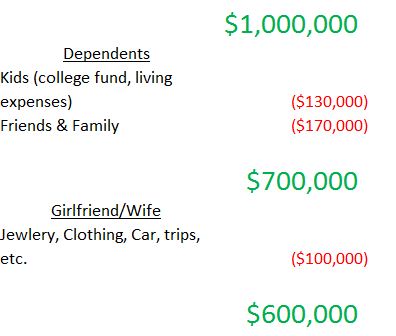 I almost forgot. Player A has friends and siblings that supported him throughout the years, too. Friends that protected him or supported him and family members that were by his side. Each of whom have their own debts that need to be paid, and dreams and aspirations. Player A decides to help pay off some debt, pay for some braces, help his buddy open a barber shop, and help his aunt open a hair salon. All of this cost him $170,000.

Player A isn't the ladies' man that a lot of his teammates are; he only has one girlfriend that he loves. He is looking to propose, so he buy's her the three karat ring that she always wanted. Now it's time to pay for the wedding, and honeymoon. She also needs a new wardrobe, since she too will be making public appearances. Deduct another $100,000.

Lastly, with $600,000 remaining, we still have to address the individuals that are responsible for preserving his money. 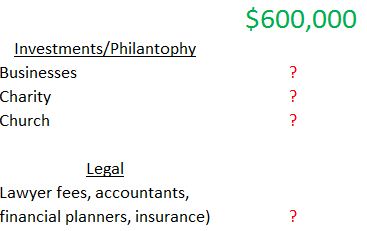 Player A needs a good tax accountant, a good attorney, and a good financial planner. He has to keep an attorney on retainer in the event he is sued. He's advised to purchase disability insurance in the event he suffers a career ending injury. He is told by his planner that he should put money away for savings, maybe even open a business or two. His accountant tells him that donating to charitites and churches are good for tax breaks. All of this costs money, and with only $600,000 left, that money can be divided up in many different ways.

This is just an example on how an NFL player can spend $5 million in one year. All of these expenses are practical, especially for someone who has the earning potential of a professional athlete.

I'm interested in hearing your thoughts and opinions. Are these athletes still idiots, or are they simply victims of circumstances? If you were Player A, what can you see yourself do differently? How much will you have left?