Admitting past mistakes in our Buffalo Bills discussions

We talk on Buffalo Rumblings every day. We've all been right about stuff, and we have all been oh so very wrong, as well. Let's discuss our favorite (and not so favorite) moments in our Bills blogging careers.

Share All sharing options for: Admitting past mistakes in our Buffalo Bills discussions

As many of you know, I started off writing for this site in the FanPost section. Back then, I could say whatever to whomever about whatever, because I always knew that it wouldn't get the attention that it may have gotten if it was on the front page. I also knew that if I said something untrue, inaccurate, or simply preposterous, that I would never be held accountable for it. I was just a guy, the average Joe, who had opinions and thoughts about his favorite team, the Buffalo Bills.

As time went on and as I started to gain perspective from other bloggers on this site, my thinking changed, as well as my attitude. I became more aware of what I was saying, and how it may impact or reflect upon others on this site.

Yesterday while at my in-laws, I was bored and rather annoyed, so I decided to go back and read through some of my Morning Joes dating back to the very beginning. I also looked at my comments and some of the heated debates and discussions that I had with many of you. Not to my surprise, I said some pretty idiotic things - things I wish I could take back.

So today is the day that I confess my wrongs. I'm going to come clean and finally be held accountable for the things that I was wrong about, and I'm hoping that you'll do the same.

Now, it wouldn't be fair to only confess what I was wrong about. I'm also going to toot my horn a bit and tell you where I was right. I will give you, Rumblers, the opportunity and the forum to finally come clean as well. Who were those fans who voted in the below poll after the 2011-2012 season? Are you going to come clean and tell us what side of the fence that you were on regarding Ryan Fitzpatrick? 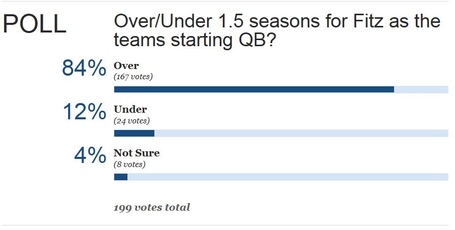 Mario signing with the Bills

I didn't see this coming at all. Do you remember the feeling you had when Mario Williams was in Buffalo being held hostage by Buddy Nix and Dave Wannstedt? When the Bills didn't sign him on day one, I just knew he was gone. I even wrote this rather somber post the day after his initial visit. Boy, was I wrong.

Suteck and I got in to some pretty heated debates about Fitzpatrick and whether or not he was the guy for the Bills. Was he Fitzmagic or Fitztragic? Unfortunately, It appears that I was right about this one.

After the 2012 draft I stopped making predictions, because prior to that draft I made some pretty outlandish predictions. I even wrote a Joe! titled I Figured it Out; here are a couple of excerpts:

Nope, we're not drafting a CB either. No Kirkpatrick, Claiborne, or Jenkins. Why? We have 3 young CB's now, Williams, Rogers, and McKelvin. If we bring in a young CB at 10, he will be expected to be at least the number one or two CB, which mean we will be really inexperienced in the secondary with Williams playing on the other side, ACTION- Bringing in Routt validates my point. They are obviously looking for Drayton replacement, as they will cut him to free up cap space.

We went on and drafted Stephon Gilmore who wasn't even mentioned in my write up, and I had us taking OT Jonathan Martin. Enough said.

Vontaze Burfict being a stud

In 2012, I did a Joe titled Man Crushes. Vontaze Burfict was my man crush, and I wanted the Bills to draft him. Not only did the Bills not draft him, no team did. In his second season with the Bengals, Burfict led the league in tackles and made his first Pro Bowl. It would've been nice to pair him with Kiko Alonso last season.

In one of my earlier pieces as a contributor, I wrote a post on Michael Sam and his announcement. In that post I made the following statement:

In the case of Michael Sam, I really don't care what his sexual orientation is or isn't. I'm accepting of all life styles, as long as it doesn't negatively impact my life or others. However, I think I will never understand the reason why press conferences and formal announcements are made. If the whole idea is to be known for what you do and not who you are, why make it about who you are?

Immediately after my post; our very own CanadianBillsFan posted this very powerful post that changed my mind. If you haven't already, I strongly recommend that you check it out. Thanks for sharing.

I wasn't going to write "officially" for the Buffalo Rumblings site. I never thought of myself as a writer, and I had my concerns on whether or not I can keep up with Brian and Matt. I was also afraid that my inexperience as a writer would taint the site that we all love. I always joke with Brian that I'm that developmental wide receiver, who has the talent but need to work on his craft to take his career to the next level. I thank Brian for allowing me the opportunity to work on my craft and being a mentor to me; because of him, after 30 years I finally found my life passion.

Okay Bills fans, it's your turn. Where were you right and where were you wrong? The truth shall set you free.