Buffalo Bills should avoid allure of the dual-threat-quarterback

Some fans want the Bills to look into acquiring RGIII or Colin Kaepernick this offseason - but a dual-threat quarterback isn't in the team's best interests.

Share All sharing options for: Buffalo Bills should avoid allure of the dual-threat-quarterback

Its official: I'll never want a dual-threat quarterback in Buffalo.

I know it's a very bold statement to make, especially coming from someone like me who tries to stay away from definitive statements such as this one. I must admit, my statement was a knee jerk reaction after seeing Robert Griffin III flame out in Washington, and Colin Kaepernick struggle in San Francisco.

Then I was asked if the Buffalo Bills should make a play for either guy. It was at that very moment when the idea for this post came to mind. I'll be honest: I cringed at the thought of having another quarterback that struggles with the basic fundamentals of the position. Both players were supposed to revolutionize the position; they started off their careers with so much hope and promise, and now it appears as if they will be added to the list of failed dual-threat quarterbacks.

For the life of me, I couldn't figure out what went wrong with these players and others like them. Is it a pattern amongst quarterbacks that shared similar athletic abilities and skill sets? The majority of these dual-threat type quarterbacks saw their play regress after the conclusion of their rookie season.

Why? Did NFL defenses figure out a way to stop these dual-threat quarterbacks?  Was it something inherent to their game that caused the dip? Was it their coaches that influenced their play? Was it a combination of all three? I have my own theory, which I'll share with you later.

First, I wanted to examine all dual-threat quarterbacks that were drafted over the years. My first thought was to go back to 2001, when the Atlanta Falcons drafted Michael Vick, since many believe he was truly the first of his kind. Even though Vick was very unique, and definitely a dual threat, he's not the type of quarterback I'm referring to. I'm specifically interested in the quarterback that operated in an offense, either in college or in the NFL, where they were a part of a designed rushing attack. More specifically, I'm interested in the quarterbacks that operated in the spread read-option offense.

I would like start my analysis with 2006 Top 5 pick Vince Young - since I believe he was the first spread read option quarterback drafted that early that had the athletic ability to run - and will continue with all dual-threat quarterbacks picked since. But first, I have to define what I mean by dual-threat quarterback. Your definition might be totally different from mine, so feel free to challenge my it.

Your dual-threat quarterback will fit in to this definition more times than not, but mostly it's based on how you perceive it. I'm sorry, there isn't an exact science to this. For me, here are my dual threat quarterbacks since 2006 (minus 2014, since it's too early to do any meaningful analysis on them). 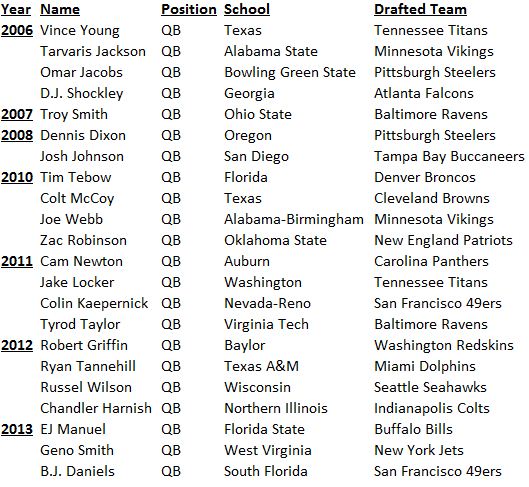 There were 22 dual-threat quarterbacks that were drafted from 2006-2013. Only three of them are definitive starters with their team now (Newton, Kaepernick, and Tannehill). Griffin, Manuel, Locker, and Smith will more than likely have to compete for a starting job this offseason.

For the sake of time and relevance, I'm only going to focus my analysis on quarterbacks that have at least three years of starting experience (highlighted in yellow). Once again, the point of this analysis is to prove the notion that these quarterbacks regressed, which will ultimately help reinforce my opinion on dual-threat quarterbacks in Buffalo.

I looked at the three statistical categories that I thought best determined the effectiveness of a dual-threat quarterback: total quarterback rating (QBR), rushing yards, and yards per-pass attempt. I then compared their first full year as a starter, to the rest of their career going forward. If a quarterback regressed in two of the three categories, I considered that a regression.

The best quarterbacks in this league all have one thing in common: they can consistently beat you from within the pocket. They all have exceptional pocket awareness, the ability to read defenses, and can go through progressions. From the moment a dual-threat quarterback played the position, up until the moment he arrives to the NFL, these traits were never really a requirement. In many cases, they were allowed to rely on their athletic ability to get them out of trouble. Sitting in the pocket and delivering the ball no matter what was not a requirement. Instead, half-field reads and "run if nothing is there" became the method of operation for these quarterbacks.

Consequently, it hinders the growth and development of these types of quarterbacks. When their counterparts were learning the fundamentals of the position - proper footwork, proper drop back depth, arm angles, anticipations throws, etc. - these quarterbacks were learning how to read the defensive end on read option plays. They were learning, "When the play breaks down, run."