Analytics and the NFL in 2016, part three: How technology can make NFL teams more competitive

Everyday technology advances are starting to find utility on the gridiron. Teams are already taking advantage.

Share All sharing options for: Analytics and the NFL in 2016, part three: How technology can make NFL teams more competitive

Sensors and visualizations are making major advancements in recent years, and while much of the technology is proprietary - guarded by the teams that employ it - I think you're going to view a sea change in NFL practices over the next few years. Here are the new technologies that stand out to me. If there are other ones that come to mind, let me know in the comments!

Companies are focusing on "wearable" technology that uses sensors to monitor a player's health and his motion. Popularized with Chip Kelly and his coaching tree, these sensors were used to avoid injuries and keep analytics on players. The Bills also track some sensor data, mostly for medical purposes. The possibilities here are nearly limitless:

Right now, the technology is still being rolled out to NFL teams while the Competition Committee decides to what extent it is permissible for teams to use and share. Right now, all it's being used for is to show you that Antonio Brown ran 24 miles per hour on a touchdown reception. In a few years, though, there will be a mountain of data to be sifted through, and we may someday see this data find a home: in the nascent analytics department.

The visualization of NFL plays has slowly developed new features over the years. Before the advent of video review, all teams could go by was a paper playbook, filled with hundreds or thousands of diagrams showing alignments, routes, and blocking. Players would view the X's and O's, mentally translating the arrows into movements on the field:

Eventually, teams started videotaping games, replacing the shapes and letters with actual moving people. In the 1980's, John Madden popularized an extra detail with the telestrator, which allowed people to annotate over the top of a video. The motion from a recorded video was a significant benefit for players, but they still had to deal with the fact that an isometric camera angle or an endzone shot still didn't match up with the images they see on the football field. 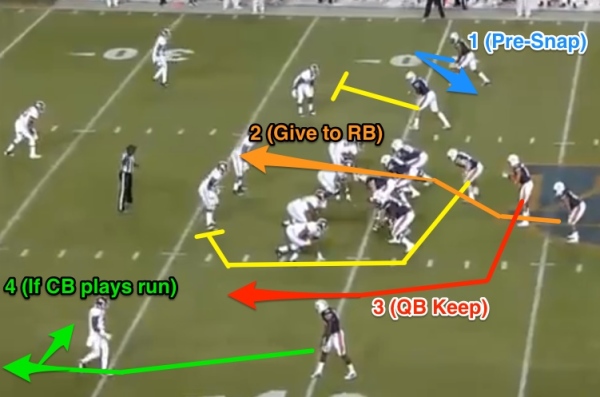 The obvious next step in translation was to turn a recording of an NFL play into something from the player's perspective. See this image of a running play from a camera on Adrian Peterson's helmet? If a defender's not in that field of view, he's not seeing him. A first person perspective is something that anyone will recognize, and it's a more realistic simulation of a play.

With the advancement of camera and virtual reality technology, we're witnessing the opening of the floodgates for this approach. Take STRIVR Labs; last year, Kent Dickerson wrote about the company, started by a group of Stanford alumni including former Bills quarterback Trent Edwards. Using a ring of GoPro video cameras, virtual reality technology like the Oculus Rift, and specialized video-stitching software, the company is able to film a football play with a first-person perspective. A player puts on the headset and sees his teammates from the perspective of a chosen spot on the field (usually behind the center). If he turns his head, the video will show him the receivers to the side of the field. Suddenly, he's seeing the game exactly as he will in a game.

Sadly, there aren't really any "demo" videos that you can view online. Here's one video I located, a 360 degree view of a high school football team running one play. If you're viewing this on a desktop computer, you can click and drag the video to move the perspective. If you watch it through Youtube on your phone, you can move the phone in space to change the viewing angle.

This technology is already being used with success by NFL teams. The Arizona Cardinals, Dallas Cowboys, New York Jets, San Francisco 49ers, and Minnesota Vikings are all STRIVR customers. Every quarterback or team who uses the technology seems to rave about it, and the Cardinals in particular consider it a major factor in Carson Palmer's incredible offensive production from 2015.

The Buffalo Bills are also employing some virtual reality technology. While it's unclear if the Bills are using the same "stationary 360 degree camera" approach that STRIVR endorses, this article's cover image at the top shows the team's quarterbacks practicing with a camera attached to their helmets - another way to get a moving first person perspective of every play.

This is what we've been waiting for, folks. Backups can now take "live reps" through virtual reality even if they aren't able to get practice time on the field. Quarterbacks can memorize coverage shells from their true perspective instead of having to translate from the top-down view in their playbook. As more and more teams realize just how big the advantage is, and as companies like STRIVR continue to experiment with adding movement, metrics, and fidelity to their product, the on-field intelligence of players is going to advance with light speed. In five years, if you aren't using virtual reality for your football team, you've fallen behind. Bank on it.