Analytics and the NFL in 2016, part five: New stats for offensive players

Last time, we started digging into statistics with some discussion of quarterbacks. Today? Some thoughts on the other offensive positions.

Share All sharing options for: Analytics and the NFL in 2016, part five: New stats for offensive players

Yards per carry is a decent benchmark stat, but it doesn't do a good job explaining when a running game is powered by the offensive line or the ballcarrier. Touchdowns could be indicative of the bellcow running back, or they may just show you the guy who gets carries at the goalline.

As we try to build a better running back rating system, what tools do we have? The main approach being taken by Football Outsiders and guys like Bill Connelly over at Football Study Hall is to classify a running back's runs by distance. Short runs are credited to the offensive line, and long runs (or long components of a run) are considered to be the product of an explosive running back.

Another system in use by Pro Football Focus is their "elusive rating." That system uses the amount of missed tackles forced and the amount of yards after contact created to formulate a super score that tells you how dangerous the runner is. I'm not a fan of the math behind their system (given the number of articles they've put out midseason saying that [PLAYER] broke their rating scale), but I think missed tackles and yards after contact are critical measures for effective running backs.

So here's my attempt to measure running back skill:

At the moment where the running back is touched by a defender, how much further does he advance? The guys that are harder to bring down will look better in this stat.

I like Bill's system for finding which finds explosive backs. Out of every run of five yards or greater, how many yards did the running back gain? Players with game-breaking speed like CJ Spiller will look more promising in this stat, but it also rewards guys with the vision and agility to set up running lanes.

Slightly different from yards after contact, this stat attempts to give credit to both the pounding physical types as well as the shifty ones.

The continuing theme is that I don't like the existing counting stats. Yards, receptions, and touchdowns give us a general understanding of who produces the most when they get the ball, but they are skewed by receivers in high volume offenses (like the Saints of the aughts) or the top receiver on an offense with bad secondary options (Stevie Johnson in his Bills years).

What do we want to know about receivers? Well, first of all, we want to see if they're getting open. That means every snap, not just the ones where the ball is headed their way. We also want to see how consistently they catch the ball, how they do in a contested catching situation, how well they catch inaccurate passes, and what they produce after coming down with the ball.

For getting open, by far the best system I've seen is Matt Harmon's Reception Perception. How does it work? First, record every route run by each receiver on a passing play. Track the particular stem of the route tree that was run, track whether the receiver was jammed or not, and whether the coverage was man or zone. Finally, record the outcome of the play. Aggregate all those values together and you have a Success Rate Versus Coverage stat which tells you how good a receiver is at getting open: 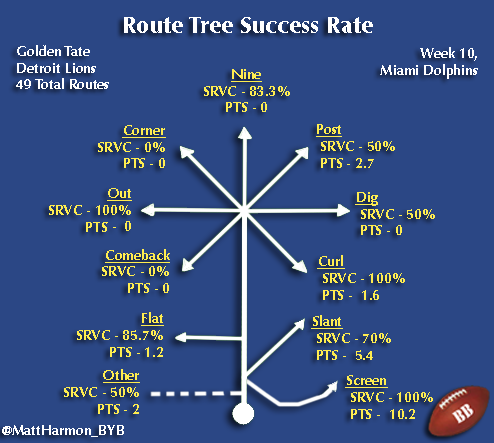 (Image courtesy of Matt Harmon at The Backyard Banter)

This is the future of receiver scouting: Figure out how often he gets open, and filter it by route and coverage. Does your offense call a lot of Four Verticals? Maybe you can find a receiver with an above average go route in the fifth round of the draft!

As for the catching component? This is actually very close to our existing targets-catches-drops statistic. The only added dimensions are to note when a catch is contested or when it comes on an inaccurate pass, or if the reception failed for a reason other than a drop (like stepping out of bounds). That will give you an understanding of a player's ability to go up and get the ball, his attention to detail, and his reliability.

How do you measure a player when it's so crucial that he operates as part of a cohesive unit? It can be a challenge, but if you've ever watched the breakdowns by Brandon Thorn and Duke Manyweather on Twitter, you can get a great understanding of what a good offensive lineman looks like.

Of course, that's all film review. How do we create a stat? If any of you remember Ron from NM's system from several years ago, I don't consider that a bad start.

Let's break this down into run blocking and pass blocking, the two essential components of an offensive line.

The first key with run blocking is to track the direction of the run. There's a major difference between running behind Cordy Glenn and Richie Incognito, and running behind John Miller and Seantrel Henderson. We already have a system in place for this! Runs between guard and center are in the A gap. Between guard and tackle are in the B gap. Outside of the tackle is in the C gap. A gap runs should be less explosive than C gap runs, since they're heading into the teeth of the defense.

Next, when I track the progress of the run, I want to mark the location of first contact relative to the line of scrimmage. I don't care if LeSean McCoy shakes a linebacker in the backfield and runs for 10 yards; as far as I'm concerned, the offensive line gets negative credit for allowing that linebacker through in the first place. On the other hand, if a player goes five yards untouched, I want the line to get credit for it.

I also want to track the quantity and type of failed blocks. For each player, were they beaten, or did they overlook a blitzing opponent?

With those metrics, you can get an overall line score from the Yards At First Contact and the proportion of failed blocks per snap. You can also break it down individually, with each player's failed block proportion and the YAFC through their gaps.

This one is well-quantified by Pro Football Focus, actually. Their Pass Blocking Efficiency stat does pretty much what we want: The number of sacks/hits/hurries out of the number of pass blocking snaps. My only real complaints are that they don't keep track of why the hit was given up (failed block, mental mistake, or coverage/QB problem), and that they arbitrarily decided that a sack is more damaging for an OL than just a hit or hurry.

Much like the run blocking metrics, if you track pass blocking efficiency, it's a stat you can measure for the line as a whole or individuals.

I think that's enough for today. But let's chat about defenders soon!