A high-level look at the Bills-Dolphins matchup

The Buffalo Bills are set to host the Miami Dolphins on Halloween. The first meeting didn’t go all that well for the Dolphins and the Bills will look to replicate that success. Now that a few weeks have passed, let’s take a look at some high level tendencies and see what matchups to expect as the division rivals face off. 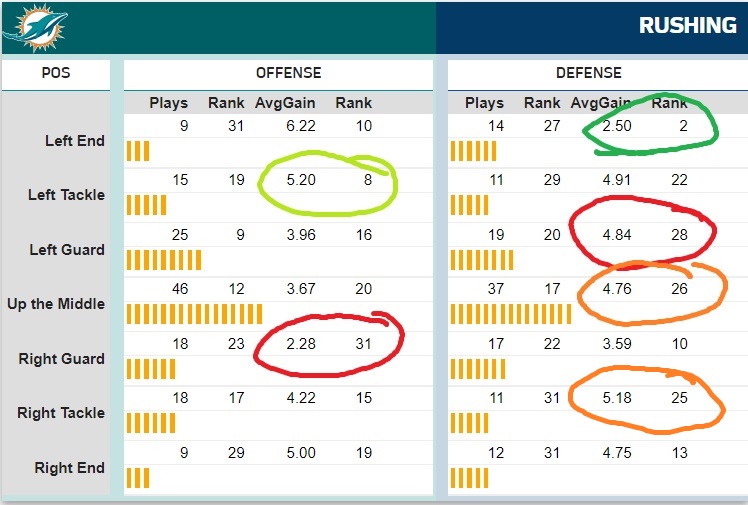 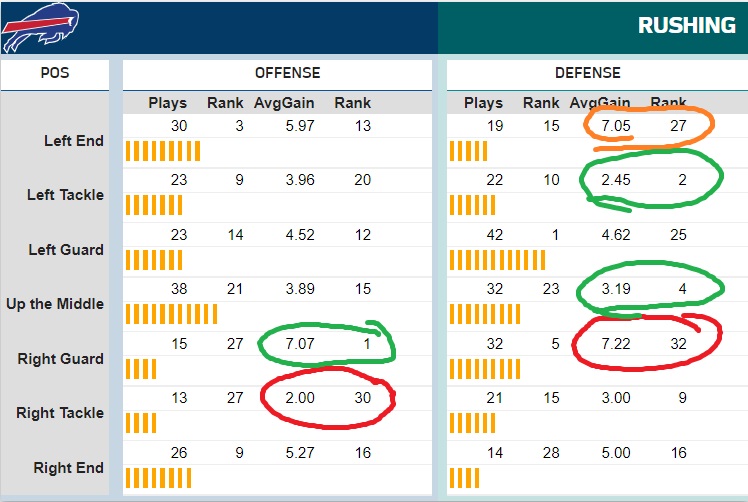 The sliders are back but with a major improvement! At least I hope it is. I already did the work of lining up each team’s offense with the opponent’s defense, so the slider toggles between the two matchups. Here’s how the run game breaks down (note: color coding and terminology follows my rule of four, found here).

For rushing stats, average gain rules all. The Miami rushing attack is for the most part pretty average, though there is some fluctuation in how average (ranks 9-24 are all considered “average” in the rule of four). Miami is good running off the left tackle, but really bad running behind the right guard. Meanwhile the Bills are vulnerable off left tackle and pretty stout off the right guard. I suspect some of the synergy of this and other charts is due to the fact that the two teams have already faced each other. That said, there should be sufficient data points to mitigate it to a large degree.

Going the other way, the Dolphins’ defense is all over the map. Buffalo has an elite average gain off the right guard (best in league), but an abysmal metric behind the right tackle. Miami’s right guard defense is worst in league. This is in no small part to the point alluded to above. Against Miami in Week 2, Devin Singletary scored a 46-yard TD off of, you guessed it, the right guard. But again, looking at the number of rushing attempts Miami has faced there (32, or fifth most in the NFL) the rating can’t be entirely attributed to Singletary’s one play. Realistically, it is safe to say that the Dolphins are pretty bad defending runs off the right guard.

These charts are more glaring. Miami’s only above average ratings in the passing game are the short and deep left and only for completion percentage. And even to the left side of the field, the average gain is average. Remember, incomplete passes would count as a “0” for average gain. What I’m getting at is that a higher-than-average completion percentage like Miami has on a third of the field would remove some zeros and increase average gain. This strongly suggests that the Dolphins are generally dialing up shorter passes than other teams. The NFL’s Next Gen Stats corroborates this with both Tua Tagovailoa and Jacoby Brissett being credited for well-below rankings in intended air yards.

Overall the Miami passing game is below average. That will be facing a Buffalo defense that... just look at the chart. The Bills have only had five attempts against them to the deep left of the field, but it’s still notable they’ve surrendered nothing.

On the other side of the ledger, the Bills are in many ways a pretty average passing offense. The Dolphins’ defense can be similarly described as pretty average. The deep right part of the field would be a good place to find an advantage for Buffalo.

The NFL already color codes these, with red being “bad” for offense and “good” for defense. I’ve circled a few things of note for discussion. I’d also point out that the above charts show zones in the field where the two teams have strengths/weaknesses, this chart and the next better reveal the overall trends.

Buffalo is allowing almost 90 yards less than league average on defense. NINETY! And over a touchdown less scoring. While not everything is drastic, almost the entire Buffalo defense is on the right side of the ledger. I didn’t circle it, but check out the passing yards per play. That’s pretty nuts.

The Miami offense doesn’t have much to hang their hat on. Their yards per play are really bad for both rushing and passing. They’re almost two field goals below average in scoring per game. On paper this is preeeeeeeeetty lopsided. OK. It’s VERY lopsided.

To reiterate, on defense you WANT the red highlighter. The matchup here that favors Miami is the red zone percentage where they’re a bit better than average, and the Bills’ woes there have been well-documented.

There’s no such thing as a hopeless game, and the play direction charts show a few ways that Miami can attack Buffalo and potentially find some success. That said, on paper this contest is woefully lopsided. That’s one of the primary reasons I did the opponent preview using the bird’s eye approach this week rather than a single player.

Short of handing someone on the Dolphins a machete and hockey mask, there’s no reason to think a single player for Miami can take over this game. Again we’re talking on paper here. A loss would of course be a disappointment. But if Bills fans even sweat a little during this game, that should be considered a letdown.

All our coverage: Bills vs Dolphins on Halloween 2021