Bills. Chiefs. Oooh yeah! A game with this much hype only comes once in a lifetime! But before addressing the epic showdown, let's briefly take a look back at last week to see how the Bills got here. In a game dominated by never-ending raindrops, the Bills hosted and hosed the Texans to the tune of 40-0. 27vanclan49 was the closest with a predicted score of 40-9, even correctly guessing the score for the Winners. Most of us predicted a blow-out of some proportion, but none of us came that close. Well done! Congrats.

Week 5, Bills v Chiefs: Here we are. Josh Allen's bringing his own brand of BBQ sauce to KC as Buffalo's high-powered offense faces off against the main contender in the AFC. Don't let that 2-2 record fool you. The Chiefs are a legitimate firepower with the only goal of destroying their opponents. As proof, they are currently a 3.5 point Vegas favorite, with an over/under set at an explosive 56.5 points.

Bills 38, Chiefs 29: Not since Rocky Balboa faced off against Drago, have I been so excited for a prime-time rumble. So to honor the moment, I took my legendary Microsoft Paint editing skills to create this Rocky homage Bills/Chiefs poster for you all to enjoy. 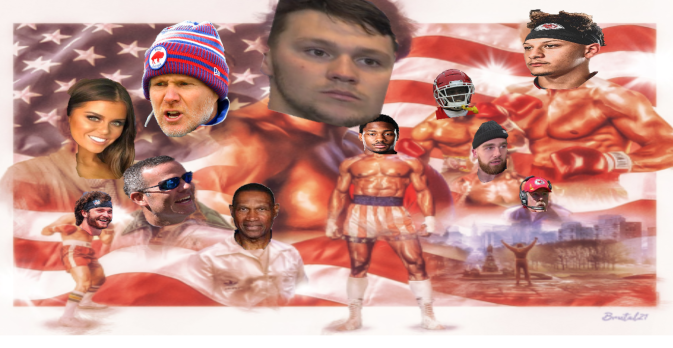 I do see a full 60-minute slugfest. In addition to a high-profile offense, the Bills are also bringing a top tier defensive unit fully capable of keeping KC under 30 points. On the flip-side, the KC defense has had a rocky start to the season. The revamped O-line keeps Josh upright as he throws for 340 yards and 4 touchdowns. Spencer Brown plays a heck of a game and scores a goal-line TD after reporting as an eligible receiver. Bills give up a lot of yards to Kelce who has a monster game, but they keep everyone else in check and the defense creates 2 turnovers. The Chiefs cut it to 29-31 late in the fourth quarter after converting a 2-pt conversion. With KC's defense needing a stop on 3rd and long with just under 2 minutes remaining, Josh rifles a TD into the TE for a Knox-out punch, putting the game just out of reach for KC. Chants of "MVP" reign down on Josh as the clock ticks to zero, making him realize that if he can change, and the KC fans can change, then everyone can change. World Peace ensues.

The 2¢ Report: I was at the game. I got wet. I saw stuff. I thought other stuff.

It's not an understatement. Sure it's only week 5, but this is an extremely important game for both teams. If Buffalo wins, they are in the driver seat for a #1 seed and home field advantage in the playoffs. If they don't win, then KC put themselves right into contention, own a significant tie-breaker over Buffalo and have a huge mental advantage over us as well. I'm trusting that our boys can push out all the noise and play their game to pull out an impressive victory. I'm looking forward to see how y'all predict this one -- happy prognosticating!