Opponent Preview: A bird’s-eye view of the Kansas City Chiefs

A high-level look at strengths/weaknesses

Share All sharing options for: Opponent Preview: A bird’s-eye view of the Kansas City Chiefs

The Buffalo Bills look to take down the Kansas City Chiefs on their home turf this weekend on Sunday Night Football. There’s a chance you recall that the last two times the teams met was in last year’s AFC Championship game where things didn’t go so hot for the Bills. Rightfully used as a measuring stick for Buffalo’s success, there are a lot of questions to be answered this week. Is the Bills’ defense as elite as their stats suggest? Can they slow down KC? If it turns into a shootout can Josh Allen and company keep up? So on and so forth. Rather than focus on a single player this week, I thought it might be wise to take a bird’s eye approach and see if any deep-dive stats can reveal some potential soft spots. Let’s do it!

As a heads up, I’ll be making liberal use of the Image Slider feature. This will give you a side by side for each team and hopefully make comparisons easier. 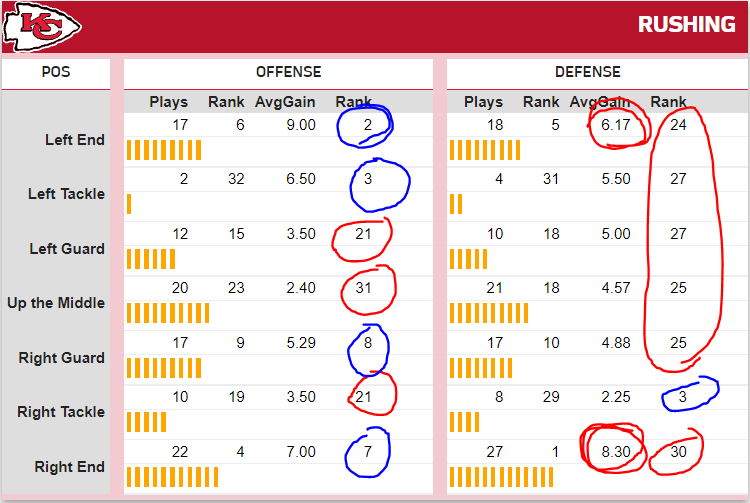 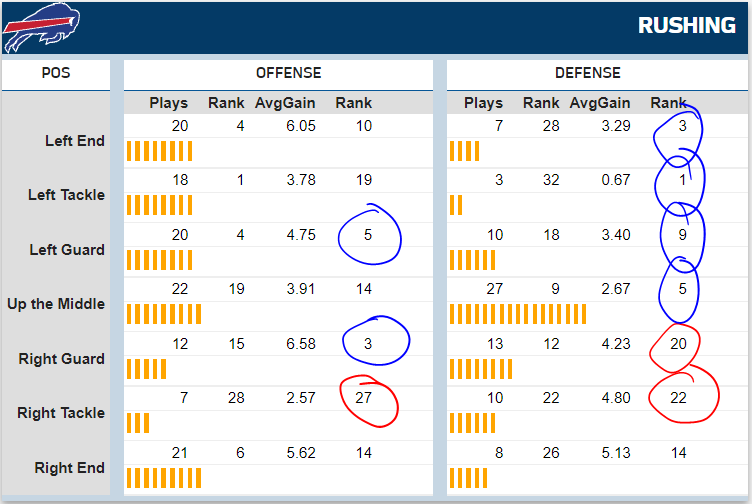 These images are mostly stock from one of the NFL’s sites but I’ve taken the liberty of scribbling in red and blue on them. Red circles are things where the team is objectively not very good, and blue means an area of strength. Here we go...

For rushing play direction the stat I’ll focus on is average gain. The number of plays the team has attempted (offense) or faced (defense) is also included for consideration. For Kansas City, They’ve been good running the ball over most of the field. With only two plays off the left tackle, that’s possibly a fluke, but other areas strongly suggest they’ve been effective running the ball. However, they might have some struggles in the middle and off the right tackle.

Buffalo’s defense on paper seems poised to meet the challenge. They’ve had solid run defense over most of the field, with some gaps on the right side that would favor KC.

On the flip side, KC has struggled mightily defending the run with some truly dreadful numbers. They’re only in the “good zone” with right tackle runs, the one area where Buffalo has seemed to struggle. Theoretically, that leaves plenty of field where the Bills are strongly favored. I’ll come back to this...

I don’t know if you’ve heard of this Patrick Mahomes fella, but I hear he’s pretty good at footballing. Overall this shows up on paper, with Kansas City having a healthy dose of blue circles. For passing stats, both average gain and completion percentage are good columns to take a look at. For KC, they’re average or better in gain everywhere except for deep middle passes. And even there, with only five attempts the results could be skewed. When it comes to completion percentage it’s (pun intended) hit or miss with three red circles and three blue. The right side of the field seems to be more problematic than the left, and deeper shots seem to be lacking a bit. Remember, the ranks are relative to the league so that means 23 teams are completing a higher percentage of passes short right than Patrick Mahomes is right now.

I didn’t mention it above as the talent gap between the first four weeks and Kansas City in the run game is not as pronounced as it is in the passing game. So this should be taken with a grain of salt but HOLY SMOKES the Bills’ passing defense is insane. They’ve been very difficult to get completions on AND they limit opponents to shorter gains than average. This will be their first big test this season but, so far on paper, the Bills would be favored (remember, grain of salt).

On the flip side, the Bills’ air game is pretty much the definition of mediocre. The KC defense has a lot of red circles. Advantage Bills on paper. 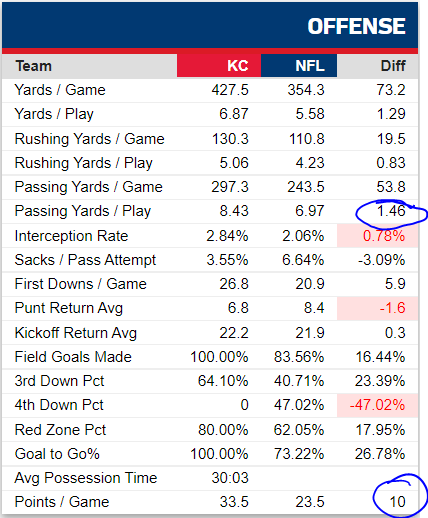 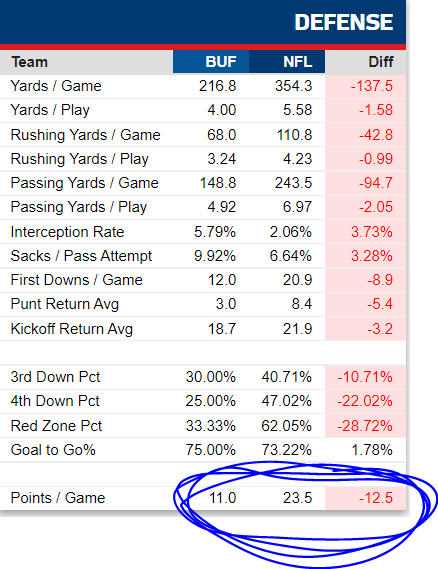 For these charts, the NFL does the heavy lifting with deviations over league average in “regular” text and below league average highlighted in red. For offense red = bad, and for defense red = good. With that said, KC is mostly in the black on offense with a few stats significantly above the mean. Passing yards per play and points per game are highlighted by me because those numbers are very good. While the play-direction charts above show some weaknesses, overall KC is getting it done on offense and convincingly.

Again, quality of opponent matters. I’m not denying that. Buuuuuut...that Buffalo defense is silly. It’s so ludicrous it’s gone plaid. Teams aren’t even scoring HALF the league average on the Bills and remember they have lost a game. Just look at the ****ing chart. That’s sick. Beating the opponents you’re supposed to is great, but what the Bills have been doing has been flat out sadistic. 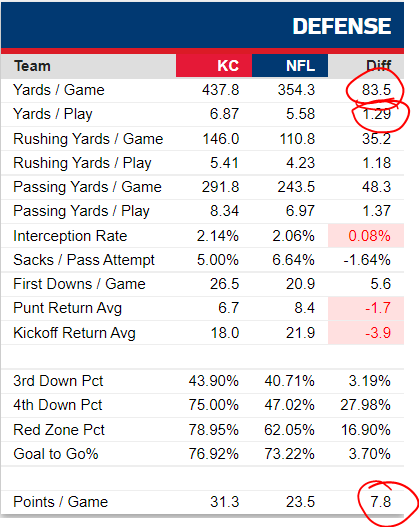 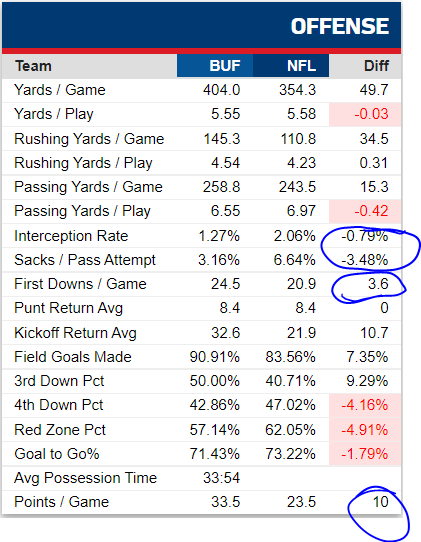 Looking at the matchup in the other direction, KC has struggled statistically. They’re allowing a lot of yards, and their yards/play on defense ain’t good at all. At 31.3 points allowed per game they’re good for more than a touchdown better than league average.

The Buffalo offense, like we all expected, has been “meh” in the passing game statistically and the ground game is a currently a strength. Where the Bills have excelled is avoiding catastrophic mistakes. Low sack rate and low interception rate means the Bills have kept the ball moving and, like KC, they’re scoring ten points more per game than league average. From a stat-nerd perspective you’d like to see some of Buffalo’s efficiency metrics improve to feel really comfortable here.

The stats aren’t everything, but they do paint a decent overall picture of the two teams. For example, I’m not arguing Josh Allen “sucks” or has been “mediocre.” What I’m saying is that there’s been enough negative plays to offset the “wow” ones to create a less than desirable aggregate. Similarly, all those KC red circles on offense shouldn’t be seen as a claim that Mahomes has “lost it.”

Ultimately, Sunday’s contest features two of the best QBs in the business who haven’t quite hit their stride this season. Both are capable of causing catastrophic damage to opponents and this week shouldn’t be any different. Kansas City leads the league with 3.56 points per drive. Buffalo comes in at number four with 2.81 points per drive.

Both teams are also complemented by a capable running game that’s helped them maintain elite scoring efficiency. The deciding factor could be the two defenses. Last season the Chiefs managed to pressure Josh Allen into oblivion. This year their defense has been the source of a lot of handwringing. The Bills have gone the other direction, with early returns being compared to historic units.

All our coverage: Prime-time Bills vs. Chiefs is early measuring stick for both teams