It could have been worse

The Buffalo Bills held a lead over the New York Jets for [checks notes...holy ****] over 57 minutes. That has nothing to do with penalties but doesn’t it feel great to NOT have the officiating be a main storyline this week? They called their fair share mind you. But there weren’t any major controversies unlike The Land Clark Fiasco of 2021. Let’s do the penalty thing!

Pretty straightforward when it comes to counts. Not only did the Bills stay ahead on the scoreboard, they were in front of the Jets when it came to avoiding flags too. Buffalo was pretty well within league average. The Jets were definitely elevated a bit above.

Buffalo is roughly average here too, though on the opposite side of the fence. This suggests some skewing toward five-yard flags. The Jets are elevated again, especially when it comes to True Yards where their 36 negated yards were a major factor.

Almost half of these are holding calls. As a reminder, special teams holding flags are enforced the same as the offensive variety. The flags on Berrios and Yeboah were on special teams and wiped out 13 and 12 yards of return respectively. As a sample of the Harm formula, Berrios was called for 10 yards (1.0 Harm) and negated 13 yards (1.3 Harm) for a total of 2.3 Harm.

Fant, Griffin, and Vera-Tucker all wiped out yardage as well on their holding calls, though the totals were much smaller.

A bunch of flags also ended up with zero harm. Typically these are declined or offsetting penalties. Hall’s defensive pass interference and Guidry’s face mask flags offset with holding calls by Mitch Morse and Dawson Knox respectively. A 36-yard catch by Gabriel Davis was kept rather than the defensive pass interference on Carter II. Finally, Mosley’s unnecessary roughness call came when the Bills were at the NYJ one-yard line. The penalty was assessed but officially the ball moved zero yards. Let’s take a look at that one.

Penalties involving defenseless players are typically what’s called “strict liability.” That means intent is completely irrelevant. It either happened or it didn’t. Contrast that to something like defensive pass interference. If there’s contact but both players are positioning for the ball, then that’s legal. It’s only when the defender is intentionally or recklessly restricting someone without a play on the ball where it’s assessed.

I point this out because C.J. Mosley doesn’t look like he’s trying to hit Dawson Knox in the head. There’s even a couple frames that suggest he’s trying to pull his own head away at the last second. The pass is behind and Knox’s attempt to fall back and catch it is just as much the reason for the contact as anything else. Literally zero percent of that matters here. Mosley did make contact to Knox’s head. The flag flies.

A Jets delay-of-game flag was assessed as 4 yards. Half the distance to the goal? Not quite. It was at midfield. Here’s a couple images of what went down. Note: The refs did NOT make a mistake. 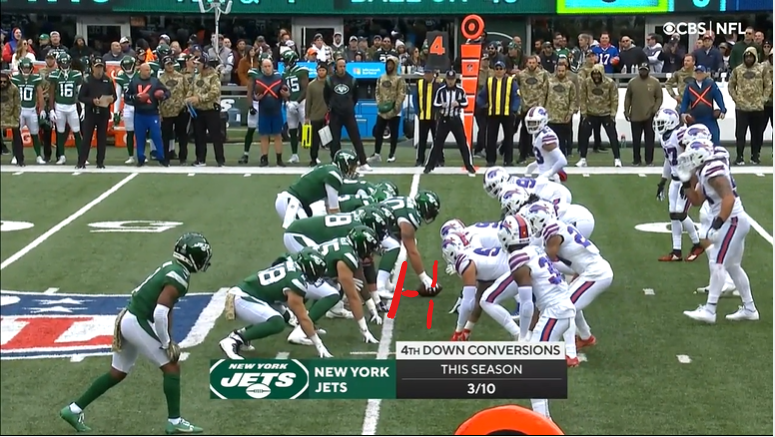 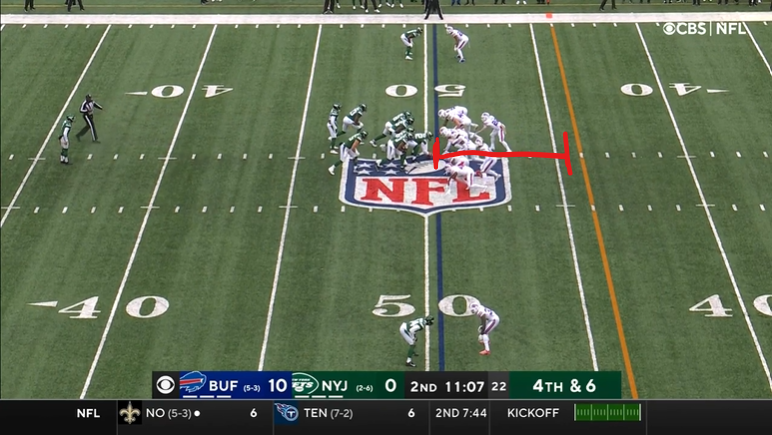 The image on the left is before the flag. To the right is after. This issue comes up here and there. The refs tend to spot the ball precisely. Before the flag, actual placement is at the 44.5 yard line. The play-by-play, which a lot of stats pull from, only uses whole numbers and rounded the line of scrimmage to the 45. After the flag, the ball is correctly placed at the 49.5-yard line, but the play-by-play rounds this time in the other direction. The Jets were actually pushed back five yards, but rounding wackiness by the league makes it look like an error.

Despite a pretty high count and assessed yards, the Jets came out relatively well with 10.5 Harm total. That’s above our 10.0 cusp between a good and bad day, but not by a whole lot.

Phew, that was a lot of jibber jabber about the Jets. We’ll cut it short and just cover a few flags on the Bills.

OK, fine. You got me. I had an ulterior motive for discussing the Mosley penalty in so much depth. This juxtaposition is a big reason why I do these recaps. I saw zero chatter on social media about how bad of a call the Mosley one was. That makes sense because all my chatter is Bills fans. In contrast, people HAAAAAATED this flag on Epenesa.

“WHAT’S HE SUPPOSED TO DO?” they cried. And to some degree that’s valid. The answer of course is that Epenesa couldn’t have done anything differently. He’s trying to make a legal play and the action caused by Efe Obada means Epenesa accidentally hits White in the head. Say it with me:

The wording of defenseless player penalties 100 percent is written in a manner that will capture purely accidental actions and penalize them. The league’s rules in this area err on the side of safety. Yes, it does mean “innocent” players are flagged.

I’m not saying you have to LIKE the rule. But I’m going out of my way to demonstrate things are more consistent than they seem, and it’s often the viewer who’s biased. The bottom line is that Epenesa couldn’t have done things differently but that applies just as much to Mosley. If you were fine with Mosley getting flagged, you should be fine with Epenesa’s. If you hated Epenesa’s, you should hate the one on Mosley.

OK, nearly done. Despite coming out cleaner in counts and yards, the downs the Bills gave up pushed them to 15.1 Harm—a decent clip higher than the Jets.

A couple notes on the most-wanted as you look through the weekly trackers. Dion Dawkins moved into second place this week. Taron Johnson is moving up the charts too. But the thing I want to point out is that Andre Smith remains the most-wanted with a mere two penalties on the year. And one of those rated 0.0 Harm. Maybe he’ll think twice the next time he’s planning on negating a 72-yard touchdown return.

All our coverage: Bills travel to Jersey to take on Mike White’s Jets