Week 11 already? Where did the season go? Lucky for us at the 9/17ths mark, Buffalo has barely played just over half of their season. We have 8 more regular season games left and hopefully several more after that! Last week, most of us picked the Bills to beat the Jets and about half of the correct guessers predicted a blow-out of some fashion. While nobody predicted a correct score of 45-17, DigitalDreamer woke up from their slumber dreaming of spreadsheet heaven to get the closest to the correct score, and even had the Jets total correct. Congratulations! Enjoy seeing your name up on the Wall of Winners. . .

Week 11, Colts v Bills: For only the second time in 7 weeks, Buffalo hosts a home game, inviting the uneven Colts into the stables. According to oddsmakers, Buffalo is a 7-point favorite with an over/under of 49.5 points.

Bills 33, Colts 10: Last week, riding into a sure-victory, the Bills defense allowed the Jets to score 2 garbage-time TD's in the 4th quarter. They will not make the same mistake this week. Despite the fact that the sky is falling, Buffalo manages another impressive victory over a team that could still make a push for a playoff spot. Bass gets 3 XP, 4 FG, including a 60-yarder at the end of the first half. This week, the Bills control the clock with a balanced running attack while also getting 100 yard efforts from Diggs and Sanders. Knox notches another TD reception in the red zone. Speaking of the sky is falling -- this week's poster is brought to you by the apprehension and concern for injured players/COVID-19 players. This game could seriously be impacted if the line is in shambles, but I'm keeping my optimism up that the offense found themselves a little bit last week and will be ready. 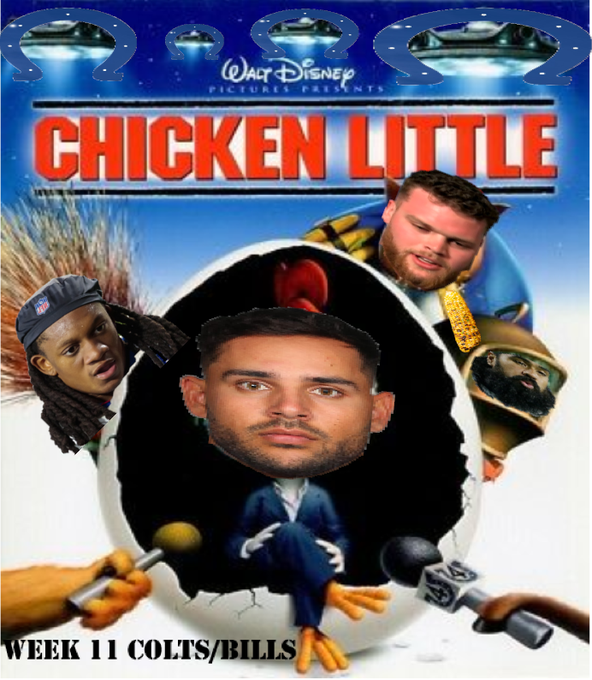 To quote Steven Tyler: If Chicken Little tells you that the sky is falling, even if it wasn't would you still come crawling back my friends? I bet you would again and again and again...Go Bills!

Have a great weekend and happy prognosticating!!