The Buffalo Bills have their second holiday game of the season. Hopefully a Thanksgiving tilt against the New Orleans Saints goes more like the last holiday tilt vs. the Miami Dolphins than the last game against the Saints in 2017. That game resembled what just happened vs. the Indianapolis Colts but even worse if you can believe it. I’m doing the bird’s eye view approach this time around due to time constraints this week and the fact it’s gotten good interaction the couple other times I’ve done it this year.

I’ve also changed the name to “cowbird’s eye” view as it’s a species that has a symbiotic relationship with bison, which was a fact that was stored in my brain for whatever reason and makes the title at least 10 percent more “on brand.” 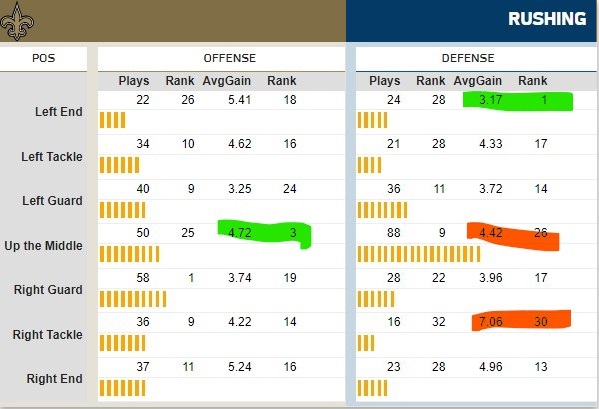 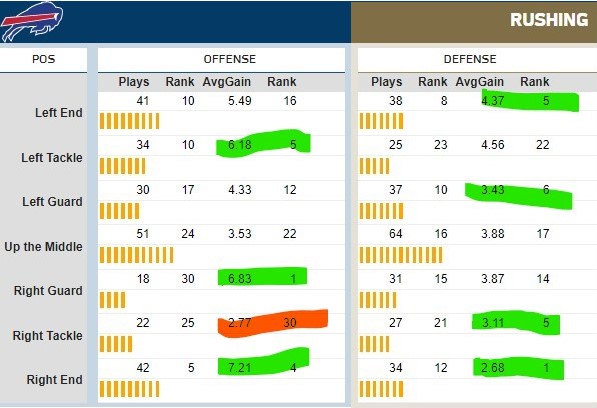 I’ve simplified the color coding a bit but I’m still sticking with my rule of four. Green indicates top eight, red is bottom eight in the league. That translates to “not average” in each direction, but includes “good/very good” on one end, and “bad/very bad” on the other.

For the Saints’ rushing offense, they’re mostly average with the exception of runs up the middle where they’re very good. Unfortunately, that’s one of two sections where the Bills are bad. Making matters worse, opponents have ran against the Bills’ middle 88 times, which is still in the average cluster of 16 teams, but barely. So teams aren’t shy about exploiting that weakness. Overall the stats look like mostly a wash except for that one glaring weakness.

On the flip side, I bet most of you reading this had no idea that of the seven zones the NFL tracks the Bills have a good (one) or very good (two) average gain in three of those zones. They’re average in three more and very bad off the right tackle, likely due to the volatility at that position. The Saints seem pretty well positioned to counter this with four areas of the field showing a strong run defense and zero with bad/very bad. Right tackle runs on paper look doomed for the Bills.

The Saints do well with average gain to the short right part of the field passing. Buffalo is good/very good at defending that area making it a wash. The charts show some major flaws with the rest of the Saints’ passing game and very, very few opportunities against the Buffalo pass defense. This matchup is heavily lopsided in Buffalo’s favor.

Flipping that, the Bills struggle with short passes overall. The Saints have struggled defending the left and middle in short zones, but do well in the right. New Orleans has a small advantage in the short passing game as a result. The Saints also have an edge for deep middle coverage where Buffalo struggles a bit. On the left side, the Bills look to narrowly be better than the Saints. On the right side, again on paper (or screen), there’s a distinct opportunity for Josh Allen and company.

Speaking of Allen, here’s his 2021 Next Gen Stats chart, which backs up a lot of the above and adds a few more tidbits.

I circled Buffalo’s goal-to-go rate as that and red zone percentages were lousy earlier in the year. They’re not dominant now, but they’ve risen above average, which is a very encouraging sign. The biggest flaw on Buffalo’s offense is now fourth-down conversions, which typically have a small enough sample size to be fluky. I only green circled one thing, which is points per game where Buffalo is still nearly a touchdown per game better than league average. That’s pretty wild considering the couple stinkers they’ve had recently.

Remember that red highlighter is only a bad thing for offenses, so that means the Saints defense has been good. Take a long look at these numbers and compare to Buffalo’s down below. Not to discredit the Saints because this many stats highlighted in red is excellent to see, but note how many are slightly below average. That said, I highlighted their conversion rates. Third downs are pretty near average, but overall the Saints are finding success stopping teams when it counts.

If I had to pick a side of the ball I think is contributing more to success in New Orleans it’d be a tough call. Both sides of the ball have a lot of indicators suggesting “average.” Both are also performing slightly better than average. Put both those together and that can make for a strong team.

There’s been a lot of word put out there about Buffalo’s defense. I don’t buy into the quality of opponent argument making the Bills’ D a mirage. Yes, they’ve had their struggles against a few teams but as I mentioned before there’s a difference between beating the teams you should and embarrassing them. As the Colts and Tennessee Titans showed the Buffalo defense isn’t perfect, but even factoring in a couple high-scoring losses many of these numbers are shocking.

From a stat-driven point of view, fans of the Buffalo Bills should have some confidence going into this game. A lot of matchups strongly favor the Bills. The Saints being down their starting quarterback might not hurt things either, though it could be argued that there’s not much of a cliff going from Jameis Winston to Trevor Siemian. And of course Taysom Hill is still Taysom Hill.

Football is a game where strategy can hide a lot of warts, and head coach Sean Payton seems to be doing a decent job of doing so for New Orleans. If the Saints can leverage the areas where they have the advantage, it might make for a very un-thankful day for the Buffalo Bills.

All our coverage: Bills vs Saints a Thanksgiving dessert for NFL fans