Time is racing by us again, while we're technically in Autumn for a few more weeks the cold wintery air of December is blowing in and Christmas decorations are taking over the landscape. The Bills are coming up on the 12/17ths point in their season with some crucial games coming up. But first, let's take a quick peek back to a perfect Thanksgiving day where the weather embraced thousands of turkey trotters and family turkey bowls across the land, all the turkeys were perfectly cooked, fried, spatchcocked, grilled and roasted and for desert the Bills brought some funk to New Orleans to the tune of a 31-6 beatdown. Speaking of which, Rumbler jg funk revealed all for us for just a few dollar store beads and an immortal spot on the Wall of Winners! A 34-9 prediction was close enough to grab first place for the week- good thing too, because it was like a 6-way tie for second place. Lots of solid guesses all around.

Week 13, Patriots v Bills: Thinking about this week's game, all I could hear was the Imperial March drumming through my head. Thanks, hal184. For the second week in a row, Sunday is not reserved for Bills football. The AFC-East leading Patriots come to Buffalo for a Monday night showdown as only a 2.5 point underdog with a lower than usual 43 points set for the over/under for these NFL defensive powerhouses. As apt as another Star Wars reference for this game is, there are plenty of other movies that feature a fun-loving rag tag team of misfits fighting heroically against the dark force of evil.

Another good fit is the Goonies. I am the Cory in the Well claiming that down here this is our time! OUR TIME! The Patriots already had their time, let One-eyed Billy stay a rotted corpse on an old ship. Alas, their movie posters are a weird air-brushed cartoonization of the main characters, and not really agreeable for my Paint "skills".

Also considered were "The Replacements" "School of Rock" "The Sandlot" "The Goonies II" "Little Rascals" "ET" "Stranger Things" "Real Genius" and "One Flew Over The Cuckoo's Nest" I finally settled on DodgeBall, because the Bills need to grab the AFC East by the balls and dodge a wrench on Monday night. 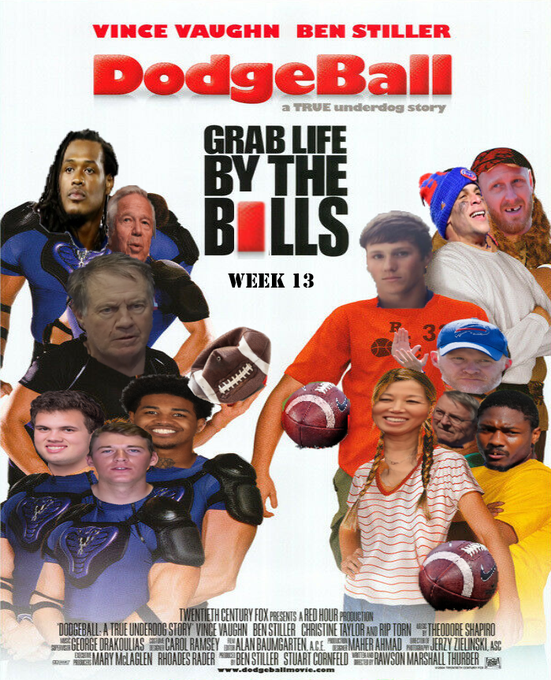 Anyway, on to the prediction part of this post:

Bills 27, Patriots 13: The weather looks to be in play in this game with strong gusty winds, which creates a few repercussions. Bass misses his first XP of the season and the Bills punt where a typical 55-FG would be attempted. Whoever kicks for the Patriots also misses an XP. Haack kicks a 9-yard punt which is muffed by the receiving team and recovered by Buffalo. Rushing TDs by Singletary and Allen. The Wind "wink-wink" cause Mac to float one toward the sidelines which Taron Johnson grabs and brings in for the pick-6. He tosses another pick against the best safety tandem in the NFL in the 4th quarter trying to force one downfield. Touchdowns by both NFL TD leaders at the Tight End position. I'm of the belief that unlike the prevailing narrative in the national media, the Bills are a much better team than the streaking Pats and they will prove it on Monday. The stretch run is here, it's time for the Bills to step up to half-court, grab some balls and win the whole gosh darned thing.

Good luck to all this week's participants, I'm hoping to see a lot of Bills love in here! Happy Prognosticating!!