After an amazing regular season final weekend, we have made it to the NFL playoffs! Super Wildcard Weekend is here. More importantly, the Rubber Match is here. Not since the Thrilla in Manila has there been a more anticipated third match between two opponents who have garnered a win each in previous battles. But before we get to this upcoming week, let's take a moment to appreciate last week when the Bills delivered a TKO to the Patriots by soundly defeating the Jets 27-10. Sure, sure, the Patriots had lost any hope to claim the Division minutes earlier when they were soundly defeated by the Dolphins, but the Bills made sure to deliver on their end of the bargain as well. Who else delivered on their bargain last week? Rumblings prognosticator Halladay07 for one, who called their own shot ("...this has to be my time.") and correctly guessed the final score to add their name to the Wall of Winners! Congrats Halladay, why don't you give yourself a halladay weekend coming up to celebrate? And while you're at it, give a halladay to Buffalove86, who also correctly guessed the final score and stated that the game may be sloppy at times to boot (pun intended?) We'd never 86 your prognosticating prowess. Welcome to the Wall!

Super Wildcard Weekend, Pats v Bills: By getting spanked by the Dolphins, the Patriots slipped to the #6 seed and have to travel to Western New York to face off against the 2nd consecutive AFC East Division Winner.... your Buffalo Bills! The Bills are getting the narrowest of odds to win by Vegas this weekend, as a four-point favorite over the Patriots with an over/under set at 43.5.

When it comes to great trilogies, there's not many movies where the third one is the best, or any good. Sure, Toy Story 3 was awesome as is the latest Spiderman movie, but those don't count as true trilogies in my opinion. Toy Story 4 was released a few years ago and just because we're on the 3rd reboot of Spiderman, it is SONY's 8th installment since 2000 with that named Super. Rocky3 stunk. Godfather3 stunk. StarWars6 was disappointing and StarWars3 doesn't count (see Spiderman). And it kind of stunk. Sure, sure, you can argue all you want about Dirty Harry or The Good, The Bad, and the Ugly, or whatever the third "Purge" movie was, but pretty much it's a short list. So instead of going with Movie Trilogies, for this week's movie poster I went in another direction, with my favorite bad movie of all time an apt fit for this all important Rubber Match. 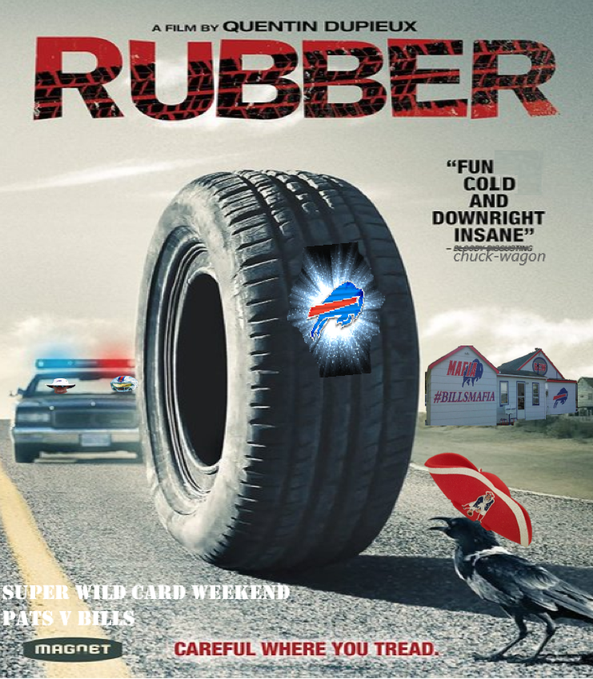 HCSM and Terminator Josh Allen provide the back-up needed to run over the Pats!

Seriously, if you haven't already, go watch the movie Rubber. It's streaming on HBOMax and maybe other places, and it's much better than watching Plan 9 from Outer Space again. If you have no intention of watching it, then just click the embedded link to watch this amazing clip, which has become my lifeblood, mantra and philosophical drumbeat for life itself.

Bills 34, Pats 14: In the freezing temperatures, deep in their own territory, Josh Allen leads the game off with a fumble-6. After that, the Bills turn the heat on the Patriots and score on their next 4 consecutive drives, going into halftime up 20-7. Patriots get within a TD after ripping off a long TD run, but the D puts the clamps on McKorckle and Co the rest of the way and Buffalo cruises to the final 34-14 score. Add another rushing TD by Singletary, A pick-6 by Levi Wallace and 2 TDs for the JuggerKnox.

My biggest hope is that there is another Predict the Score article to post sometime next week. Good luck to all score guessers. Happy Prognosticating!!