What a week, eh? The air smelled sweeter. Water tasted clearer and crisper. If you sat in a quiet space, you could hear trumpets of angels playing in the background. That's what happens when the Bills crush the team that has tormented most of us for 20 years. You know all the stats by now, but the Bills played pretty well and the Pats, well, they got a garbage time TouchDown against mostly back-ups, so that's something they can hang their hat on before heading out the door to play some winter golf somewhere warm and far away (from a football field). After the game, Josh Allen and McCorkle Jones shared a nice embrace. Picked up on mic Josh said "What did the Joshy say to the McCorkle? -- Bye Son!". Don't believe me? See for yourself.

I don't know, maybe he said something else, but I'm sure 716Bison agrees with my interpretation. As we all know, the Bills won. Big. So big that the Patriots even paid tribute to Josh Allen by scoring 17 points. 716Bison also got that 17 correct with their winning 41-17 guess, adding a second tag on this year's Wall of Winners.

Congratulations again, very impressive to call for an epic blowout in freezing cold temperatures against the #2 defense. I may have lowballed the Bills total score, but stating that the JuggerKnox would have 2 TDs, Wallace would grab an INT and Singletary would score again is a nice consolation prize, I guess.

Playoffs Divisional Round; Bills v Chiefs: In what could be the most anticipated game of the entire NFL Playoffs, the Bills head into Missouri to renew their recent rivalry against the Kansas City Chiefs. Buffalo is only a 2.5 point road dog, and the over under is set at TILT!! This game may not be for the Super bowl Championship, or even the AFC title, but two powerhouse teams will leave it all on the field, and someone's gonna be put in a bodybag.... 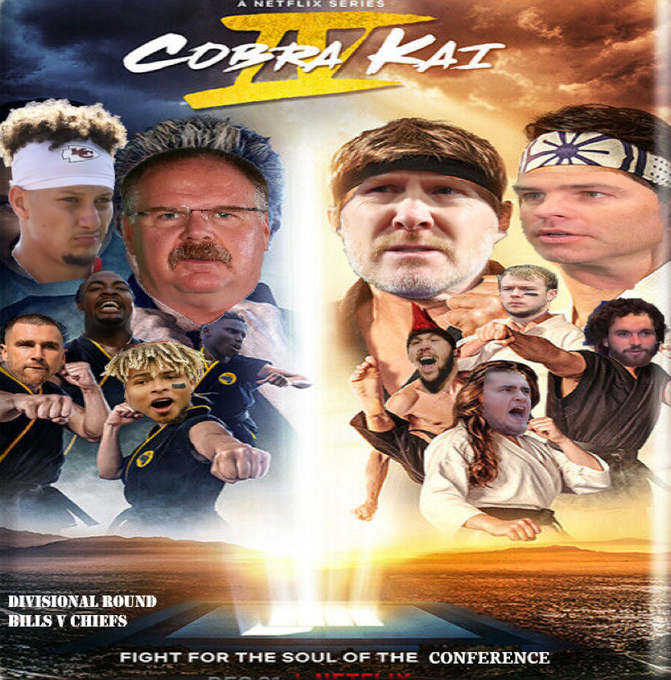 This week's Netflix Series poster is an homage to the grizzled coach hardened by life-- teaming up with an old "friend" to battle against his previous master as they pit their new superstar students against each other and fight for the soul of the conference. Congrats to Tommy Doyle for the Big Man TD -- you're dedication and effort got you onto a poster! Josh Allen is ready to hurdle over everyone.

Bills 38, Chiefs 30: What a great follow-up to last week's dismantling of the Patriots we will be treated with. This game will see both offenses playing at a high-level with the Bills defense doing "just enough" to earn the win. While last week's game may have definitively answered the question 'Who owns the AFC East?' the winner of this game will likely claim to be the top dog in the AFC for the moment. This is a rivalry I can't wait to enjoy every year, much like Pats/Colts fans enjoyed their run through the aughts. I just have a feeling that this year will end up being a special year for the Bills, and beating the Chiefs in the playoffs was always in our destiny, even if it's not as the top two seeds squaring off in the AFCCG. Down 24-38 early in the 4th quarter, the Chiefs score on an impressive 23-yard run by Mahomes, but miss their 2-pt conversion. Patrick Mahomes attempts a pass to his TE-- a pass only he can even attempt according to Chris Collinsworth, which is picked off by Tremaine Edmunds securing the victory. Bills score 31 points in the first half and up their impressive 'drives that end with a TD' streak to 10 before Bass comes on and nails one from 45-yards out in the middle of the second quarter.

So that's all I got. Let's mount up to keep circlin' those wagons! Go Bills, and as always -- happy prognosticating!!