We made it. Specifically, we made it to the end of the regular NFL season. Sixteen games in the books and one more left to play for more than half of the teams in the NFL. Not the Bills, who are guaranteed a playoff spot! Last week the AFC EastBusters came through and took out Vigo, the master of Evil the Falcons to secure the aforementioned playoff spot and are knocking on the door of consecutive AFC East Division titles. CS in Alabama took the repeat theme to heart and grabbed a second consecutive spot on the wall of winners with an impressive 29-13 prediction, nailing the Bills score and only 2 off of the final tally. Like the Bills, CS in Alabama is coming in hot at the end of the season and becoming a real threat as the playoffs loom. Congrats, to one acquaintance who refuses to be forgot in 2022: New year, new tag!

Week 18, Jets v Bills: The Jets come to New York to face off against the Bills. The Jets are looking to steal a win against an AFC East foe and worsen their draft position, further develop their promising rookie QB and

Maybe it's just the DraftKings site sponsorship, but beating the point spread is definitely in discussion by Jets fans (and a few "Bills Fan Here"s). Speaking of which, for your prognosticating assistance, the point spread is currently set at a whopping 16.5 points and the over/under is around 43 points.

Bills 30, Jets 15: The Bills aren't taking the Jets lightly and take a commanding 30-7 point lead halfway through the 3rd quarter. McDermott and co slightly ease their starters out of the lineup and the Jets take advantage with a late TD/2 point score. Micah Hyde secures the onside kick and the Bills end the game in victory formation. The secondary plays lights out with multiple INTs and Passes Defensed and even add a sack. This week's movie poster is an ode to the best safety tandem in the NFL and the rest of the secondary for how well they've played in Tre White's absence -- as well as rooting for the House Party to begin before the game clock reads 0:00. 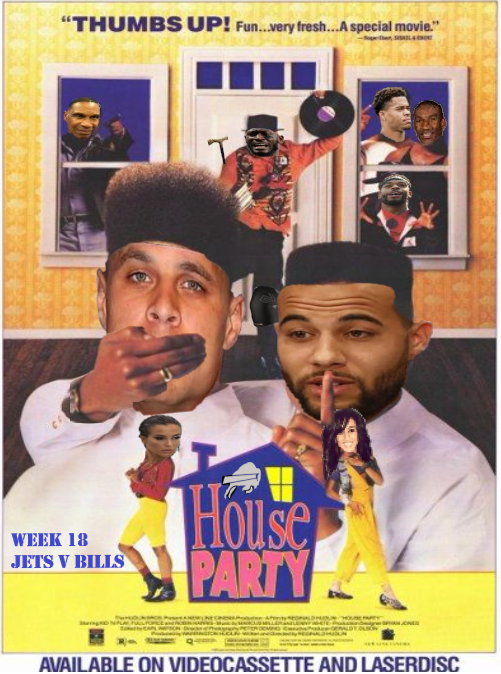 I can't wait to get this fun and very fresh special season on laserdisc!

It's been a fun regular season here in "Predict the Score"-land. We all know wacky things can happen the final week (which is why 99% of fantasy football leagues don't use it), so let me know what you think will unfold...happy prognosticating!