We are in the dead period between the draft and camp, so I thought that it would be a good time to put some retrospective together on the draft. I have some interesting data to share on how the actual draft picks compared to the draft expert predictions/rankings. 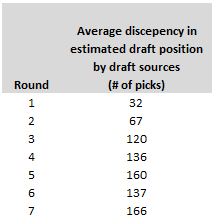 As you can see above, the variation between the "experts" was huge. There is no such thing as
"consensus" rankings. Within the 1st round, the "experts" averaged a whole round (32 picks) of variation. In the 2nd round, the "experts" average variation was over two rounds (67 picks). That is the opposite of consensus. As much fun as it is to play with these draft simulators, they are a bit of fools gold because they give the impression that certain players can be drafted in specific rounds depending on what simulator you use. It is an illusion of Draft Value/Player Rankings. But I had to use something, so I went with the average of all of these sources.

This is why I rarely accuse a GM of over-drafting. The 32 teams have infinitely more resources than the internet draftniks and the internet draftniks have infinitely more resources than me. I like to play the GM game because it is fun and I have plenty of opinions on where I think players should be ranked, but I know so little of what the team scheme visions, strategies, and financial needs. This inside information drives the draft

There is no such thing as BPA. Every GM drafts for needs. It is just that some GMs have the luxury to draft for more future and strategic needs than some other GMs.

The Results: Difference Between Estimated Pick and Actual Pick

Now that I have established an "average ranking" for each player based on multiple draft website rankings, I thought it would be interesting to see how the "average ranking" compared to the actual draft position for each drafted player. The first two charts are for all draft picks at all positions.

The following chart shows all of the 2022 draft picks (x-axis) and whether that pick was above or below the average rankings based on several draft websites (y-axis). 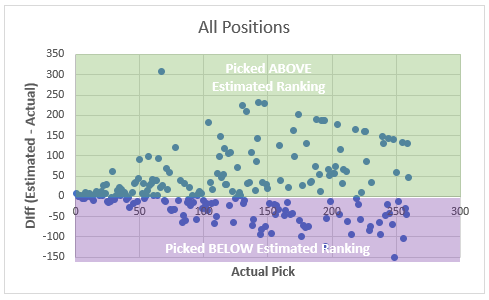 The best way to think of the charts is...

So, the farther the dot is away from 0 on the y-axis, the bigger the "reach" or the "fall". This convention is true for all of the position graphs, but I did not include the green box or the purple box in the position graphs because I wanted to highlight where each round was. Does that help?

All Positions By Round

I also wanted to see if there were any trends within each round. The following chart sums up the diffs in each round. 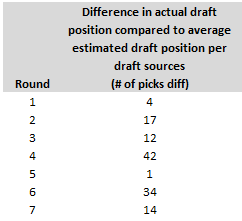 There were a couple of things that stood out to me from these two "All Position" charts.

NOTE: I did not include the green region and purple region shading for each of the position charts because I wanted to show the boundaries for each round. I thought it was more important to show how certain positions fell in each round.

NOTE: the dotted curvy line in each chart is just a trendline to give a visual idea of trends of whether players were being taken above or below their projected rankings 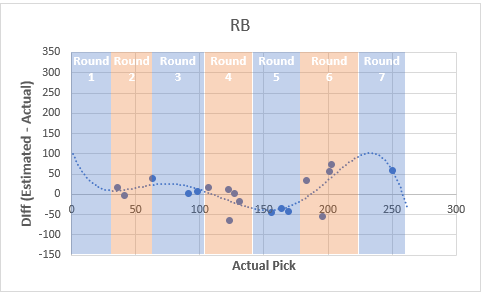 The estimations for Running Backs were one of the most accurate of all of the positions. There were 10 RBs taken between late 3rd round to the 5th round. There were only 8 RBs taken outside of that "sweet spot" 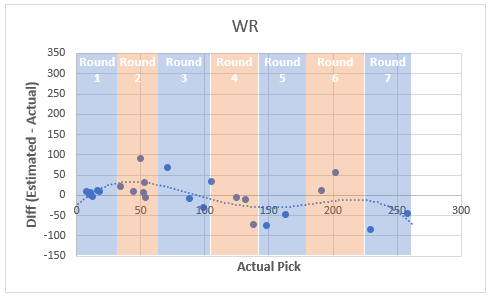 The estimations for Wide Receivers were also fairly accurate, but in the 1st two rounds there were 12 WRs taken and only 2 were taken below their "estimated" ranking and one of those was Jameson Williams (likely because of his injury). The opposite was true in rounds 3 through 5. There were 9 WRs taken in these rounds and all but 2 were taken below their "estimated" rankings. 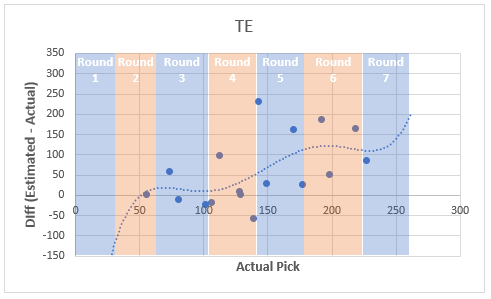 The estimations for Tight Ends were not very accurate. In general, the TEs went late, but they mostly went above their "estimated" rankings. With all of the emphasis on the passing game, this position seems to be in higher need than its perceived value. As a result, all but 4 of the TEs were taken above their "predicted" ranking. The passing game rules! This may be why Beane did not take a TE in the draft. He did not have a high need, so he was not looking to aggressively go after a player higher than what he had them valued at. 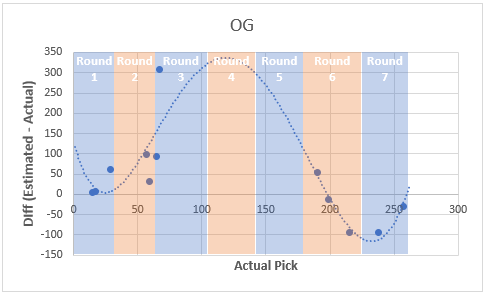 Yikes! The estimations for Offensive Guards were all over the map. This position had the highest variation of all positions. And the pool of pure OGs was very small. Only 12 OGs were drafted. You can see why Belichick "reached" for Cole Strange. But he was not even close to the biggest "reach". He was the 4th biggest "reach". At the top of the 4rd round an OG that was predicted to go as a UDFA was taken. This was not a great group of talent. But the demand in the 1st three rounds was fairly high for some teams. The trenches are always in demand. If you were in the hunt for an OG, then this was not the year to be looking for one. Maybe that is why Beane did not dip in his toes in this position group. Just based on my research into this position, it seemed that there were lots of OTs that were projected as OGs in the NFL, so maybe that had something to do with this group being so small. 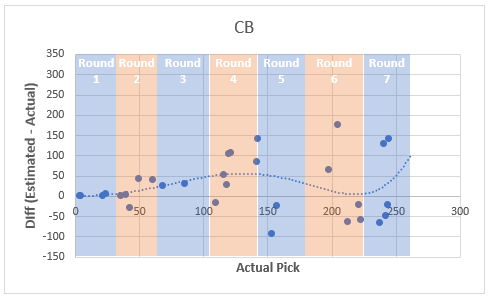 This was a fascinating position, and it seems like this chart shows the delayed effect of so many teams going to 11 personnel. The defense is trying to catch up. The estimations for Cornerbacks were fairly accurate through 1 ½ rounds. After that, the CBs went much higher than predicted. There were 18 CBs taken in the 1st 4 rounds and only 2 of them were taken below their "estimated" ranking. This was a good class of CBs. I think it was one of the stronger positions in the draft. I think this graph shows that.

What do you see in the data???