You came back, thanks! Nice to see you!

Week One Recap: Well, well, I didn't win again. That's no surprise, and I think there's ethical issues if I ever do win, but my prognostication was pretty good: "...dismantling the Rams in front of their home crowd and their fan. TD's to Diggs, McKenzie and Singletary. The defense comes out with their hair on fire, making Stafford wish his elbow injury was more significant. He gets sacked three times and throws two interceptions. As is a precursor to his season, the Punt Dog only gets in the game to hold for Bass." OK OK, it would've been even better had I said "Davis" instead of "Singletary" and I greatly underestimated the defense. I'm pretty sure Shaq Lawson registered a sack even, and he was inactive. There was a lot more chatter about Stafford's elbow after the game than the weeks before it. But enough about my prognostication, this post is for all of you! And like to point out that 145 comments was amazing and it's no surprise we had 2 winners last week with guesses of 31-17. We actually had a lot of people guess the correct Bills score, but too many people overestimated our opponent. First up, Congratulations DingusDay, I hope your day is filled with kielbasa, pierogis and plenty of Zywiec beer. Everyday should be Dingus Day. Even though their way down South, Houston Bills Fan, is not forgotten. I hope your Texas BBQ is extra tender today and like everything in Texas, I'm sure it's a big plate! Congratulations!

Week 2: Titans at Bills: The Buffalo Bills look to continue their prolific 2022 season with an impactful home opening win against an all too familiar foe, the Tennessee Titans. Seriously, we've played them a lot recently, even though they're in a different division. Unlike the last several years, they get to travel up here and Vegas is not kind to them, as they are currently a 10 (ten!) point underdog to Buffalo with an over/under given at 49 points.

Bills 39 Titans 14: While Henry has some chops and will get in some good runs, Tannehill looks like he did with the Miami Dolphins (pedestrian/replaceable). The Titans offense has become too one dimensional, and the Bills revamped D. Line is able to contain Henry better than they did last year. 2 TDs to Knox, and Singletary gets on the board as well, as the Bills make this one look too easy. The Titans out-punt the Bills 9-1.

Hype Poster OK, I usually don't explain these too much, but I will this time. The Bills are incredible. Josh is not at the center of the photo because he's representing Baby Jack-Jack, he just has too many ways to beat the bad guys. Von Miller is Elastigirl, because he's very bendy. Singletary is Mr Incredible, because he's gonna do the heavy lifting in this game, Knox is Violet because he disappeared last game, oh and he can throw down timely force fields (Blocks) and of course McKenzie is Dash, he's short and speedy, and really The Flash moniker has been used too much in the NFL lately. I have Robert Woods as Frozone because while he's not family anymore, most Bills fans like him enough and of course Henry is the big bad at the top. And of course, this team is Incredible. 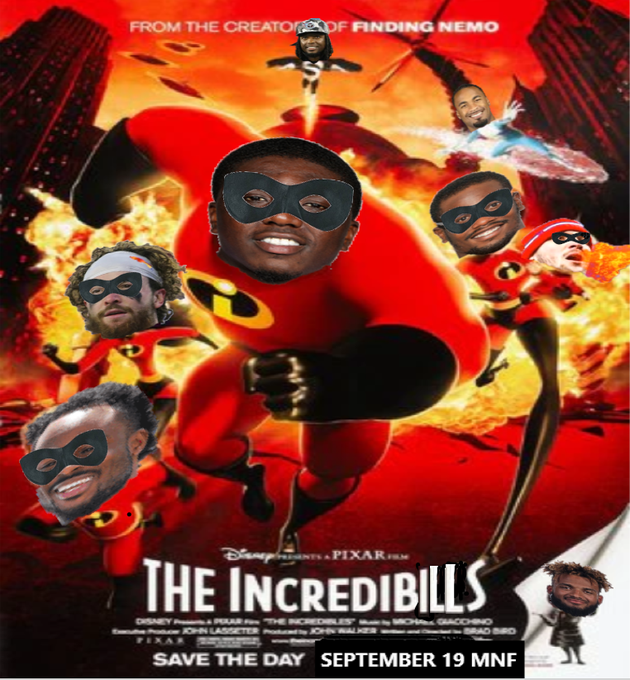 That's how I see week 2's game going, how did I do? Good Luck and happy prognosticating!