WEEK 2 RECAP: Umm, well, let's just say the Bills got back to business and put a hurt on the Titans, doubt they'll need this AFC Tie-breaker in their back pocket, but it's nice to have. Diggs went off, Josh was Josh (with less running) and the Titans were waiving the white flag before the third quarter was over. It was beautiful. While many Rumblers predicted a blowout and many Rumblers actually guessed 41 points for Buffalo, we have a true winner this week and they are a Rumbler through and through, often providing fan posts and comments that answer podunkowego's original comments, we would be a lot poorer without their input and feedback on this site. Congratulations podunkowego, an excellent guess of 41-10!

WEEK 3: BUFFALO At MIAMI: Miami is also off to a hot start as Tua helped engineer a fantastic comeback against the Ravens last week. But this week is different, Buffalo is on a mission and having a divisional win will be a big deal to this team of destiny. Buffalo is again favored on the road (by 5.5 points)! The Over/Under according to some Yahoo is 52.5 points.

BUFFALO 53 MIAMI 14: Miami ends the Bills streak of preventing the garbage time touchdown. I was hesitant last week to give Buffalo a 40-burger ( I gave them 39 points, lol) but am not hesitant to give them the 50-burger this week and blow the over/under all by themselves. Point Spreads don't matter this year, this team is a force, and will force Tua into many errors, 3 fumbles (2 lost) and 3 INTs spell his doom as the defensive warriors refuse to go to sleep without putting up a fight. Groot notches his third consecutive game with a sack, Poyer notches his third consecutive game with a pick, this time he brings it in for the 6!

HYPE POSTER: Josh Allen can rip your heart out and show it to you, but the D Warriors have to play very well. Ed Oliver lives the mantra of Squish The Fish! Also, as an aside, these movies were a lot scarier when I was a preteen watching them, now the graphics are bad, the acting is bad, just about everything is bad, unless you want some laughs.If there are any PETA people reading this, that dolphin is just ummm...sleeping, yeah that's it, taking a snooze on land in the sun...like dolphins in Miami do, or something. 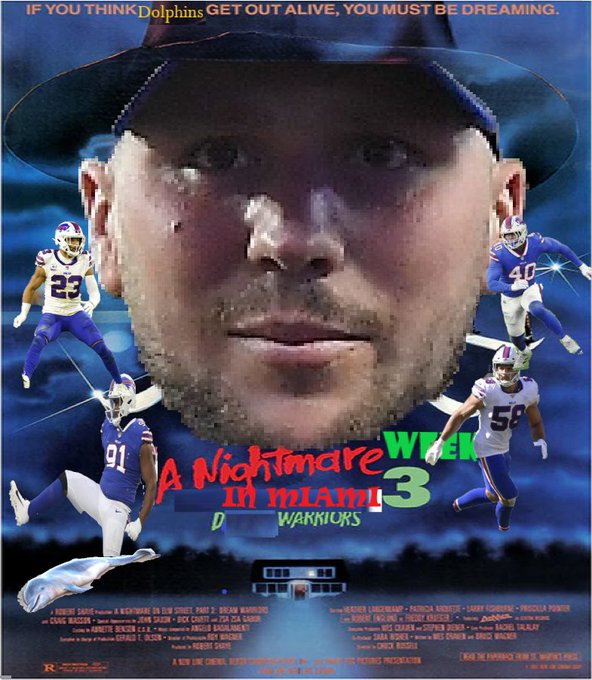 Here you go! I didn't include this last week because I just named the week 1 winners in the post, but back by popular demand here's the weekly Wall of Winners!

Remember, if you've got an idea for a poster hit me up in the comments, all suggestions are welcome! If you think I should be better at Poster Creating, they don't pay me enough to be better. Sorry. It's all for fun anyway. Good luck and happy prognosticating!