Bills vs. Colts: Tyrod Taylor is not wearing a diamond-studded mouthguard

Not only is Tyrod Taylor not wearing a diamond-studded mouthguard in his starting debut with the Bills, he may not wear any sort of mouthguard at all.

Share All sharing options for: Bills vs. Colts: Tyrod Taylor is not wearing a diamond-studded mouthguard

If you've been outdoors with little to no Internet exposure on the day that is widely referred to as the last day of summer, then you may have missed a little dust-up involving a TMZ report which claimed that Buffalo Bills quarterback Tyrod Taylor had commissioned a diamond-studded mouthpiece for his use in his first start with the Bills this Sunday against Indianapolis. 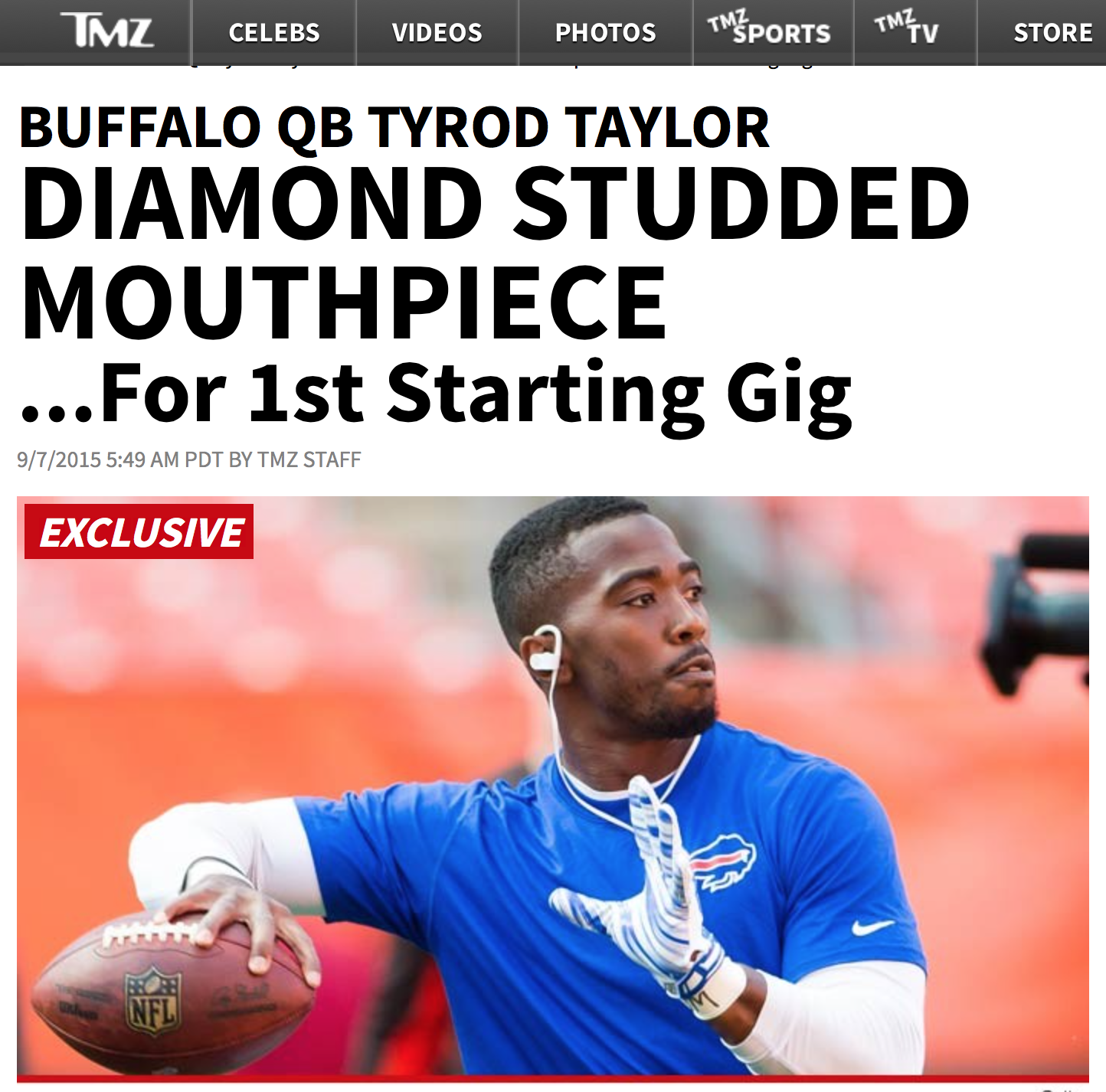 The aftermath of that report (i.e. "Monday morning," to those of us that are network-bound) was quite strange, to be certain. For starters, fans probably should not care what a player wears in his mouth during a football game, yet apparently a lot of them do; that TMZ article produced some of the most melodramatic, scorching-hot commentary that we have yet seen in the Bills' corner of the web. Our own website didn't escape that fate, either.

Most curiously, it was a weird report because Taylor did not wear a mouthguard in any of his three preseason appearances this summer. Not against Carolina, not against Cleveland, and not against Pittsburgh. No hardware in his mouth at all. Granted, that doesn't mean that that couldn't change once the regular season began, but a trend is a trend, no?

Still, TMZ does not completely lack credibility, and there's nothing wrong with a man celebrating a career milestone in his own way - if Ron Swanson would find that beautiful, then who are the rest of us to judge? - so, aside from the no-mouthguard-in-preseason thing, it seemed utterly believable.

As it turns out, however, the TMZ report appears to be false. Eric Wood was the first to alert the presses that the story was faulty.

ESPN's Mike Rodak followed up with Taylor's agent, who not only discredited the report in its entirety, but conveyed that Taylor and his family were offended at the mere notion that he'd wear a diamond-studded mouthguard.

Tyrod Taylor’s agent tells me that report about him wearing diamond-studded mouthpiece is a "complete fabrication." Never talked to dentist.

Tyrod Taylor’s agent, Adisa Bakari, says that Taylor and his family are offended by the notion that he would even wear a diamond mouthpiece.

That, unbelievably, is the entire story. (Or non-story, depending on your perspective.) Tyrod Taylor is not wearing a diamond-studded mouthguard this coming Sunday - it would almost be surprising if he wore even a standard, boring one at this point - and it would seem that TMZ whiffed mightily on this report. Consider yourself caught up on what, in an ideal world, will be the final bizarre offseason story line for the Bills this year. Please, continue to enjoy your holiday.