In Week 6, the New England Patriots scored big with their shot plays, while the Buffalo Bills merely shot themselves in the foot.

The one thing that stood out to me when watching the New England Patriots this past Sunday was how often they used play-action and max protected for Tom Brady. The Patriots are not a run-heavy team, so seeing them using play-action so much confused me a bit. But the more I watched, the more I saw why: it worked, and Brady is really good at it.

The contrast between the Patriots and the Buffalo Bills is very apparent when watching the Bills throw the ball deep. For a run-heavy team, you would think max protect, play-action shot plays would be a great success offensively. However, that is not the case - and as you will see, the Bills shot themselves in the foot when they tried for the big play.

Between the 40-yard lines is prime shot play territory in the NFL, and here the Pats go for one. This is the 43-yard Brady bomb to Brian Tyms for the touchdown in the early part of the third quarter. As you can see, the Pats keep eight in to protect Brady against a four-man rush, meaning the Bills have seven guys to cover two receivers. 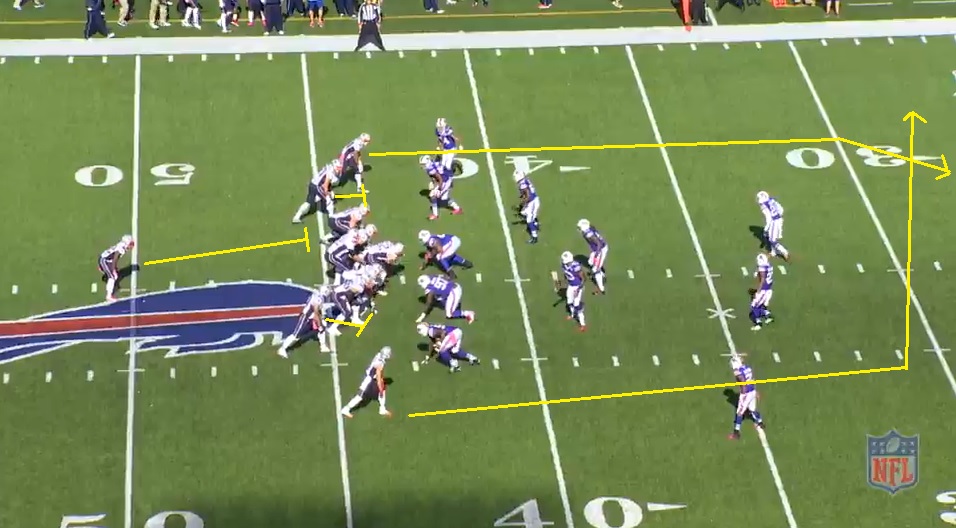 Look at the pocket Brady has. This is to be expected, though, when you keep that many guys in to block. Even though the Bills have seven guys playing zone defense, most of them aren't covering anyone because there isn't anyone to cover... so, they are basically wasted. If you recall, Stephon Gilmore had excellent coverage on the play. A super pass 45 yards downfield by Brady and a nice catch by Tyms in the end zone make the play count anyway. I do not know the defensive play call here, but it sure looks like quarters coverage, so the safety to Gilmore's side is supposed to double the outside receiver if there is no vertical inside threat. In other words, I think Gilmore should have had inside help on this play. This deep ball really shouldn't be completed against this defensive play call. I guess you just tip your cap to Brady. 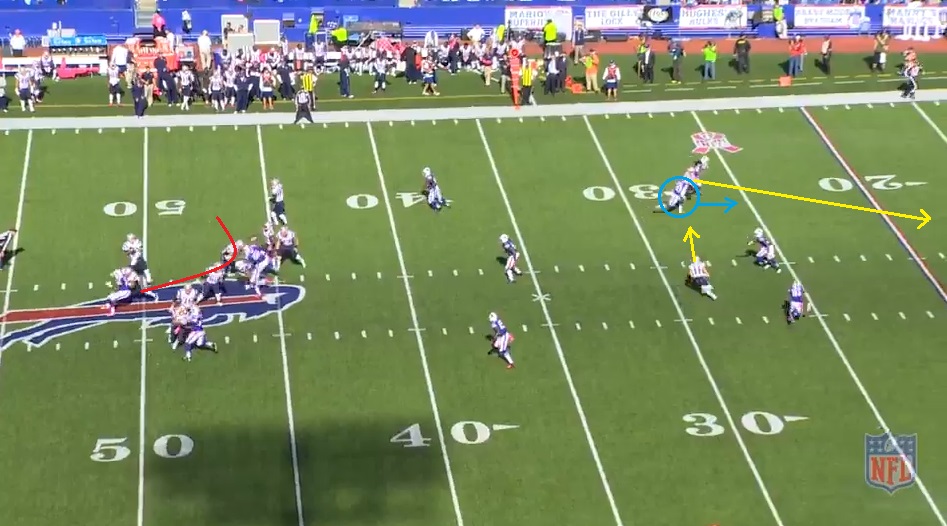 Regarding the Bills, I picked out two different plays where the Bills went max-protect - and on both of those plays, bad things happened.

The first was a Kyle Orton interception. There are two main options in the play: Sammy Watkins deep, and Marquise Goodwin on the comeback. The tight end at the bottom was an outlet. (Side note: Goodwin might have the option to go deep here or run the comeback, depending on how the defensive back plays him; I think the comeback was fine.) The main problem here is that nobody is open. Watkins is bracketed and Goodwin has the defender on his back. The completion still might have been made if Goodwin gets into a better passing window. Instead, Orton throws it to where he is, and Jamie Collins jumps into the window and picks it off. I am not sure if Orton even saw the linebacker, but regardless, an interception is not a good play. 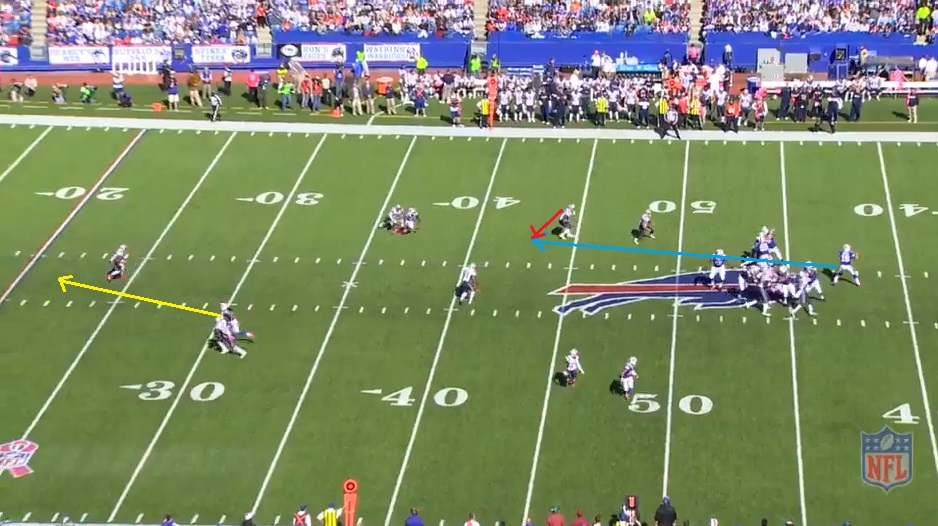 I find this second play even more interesting, because it is very similar to the play the Pats scored on above and it is one that is a staple of the Bills' playbook. One receiver goes deep, and the other comes on the deep cross. While the Pats scored on theirs, the Bills took a 10-yard sack. 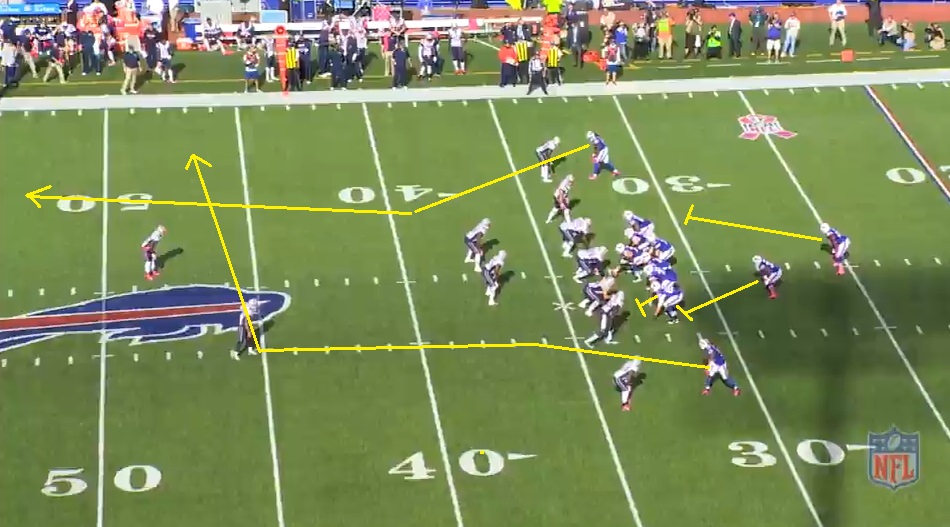 You can see here that the play design works: Robert Woods is running free as Watkins took the top off the defense. (If the free safety jumps Woods, Watkins would take his route to the middle of the field and would be running away from the corner.) However, the reason why Woods never gets the ball is in the backfield. Look at Orton: he's getting crushed just as he needs to throw the ball. 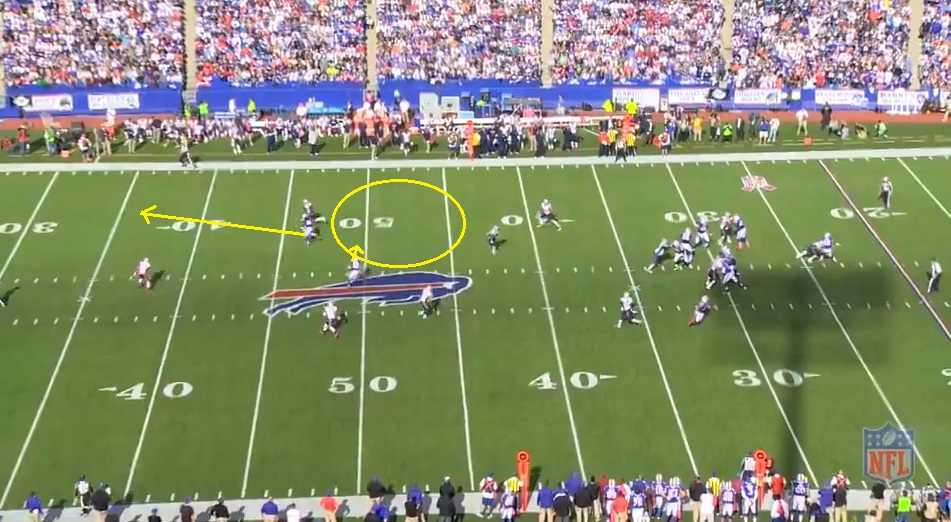 You can see Woods breaking into the open field just as the Patriots' linebacker comes free up the middle. I give Orton credit here: the dude stood in the pocket with his eyes downfield looking to make a play. A lot of quarterbacks don't do that. What makes me sad about this play is that there are four Patriots rushing and seven Bills in protection. Of those, three are looking around blocking nobody. Boobie Dixon is blocking Vince Wilfork. And worst of all, the linebacker comes free up the middle. Exactly the opposite of what should happen when you max protect your quarterback. 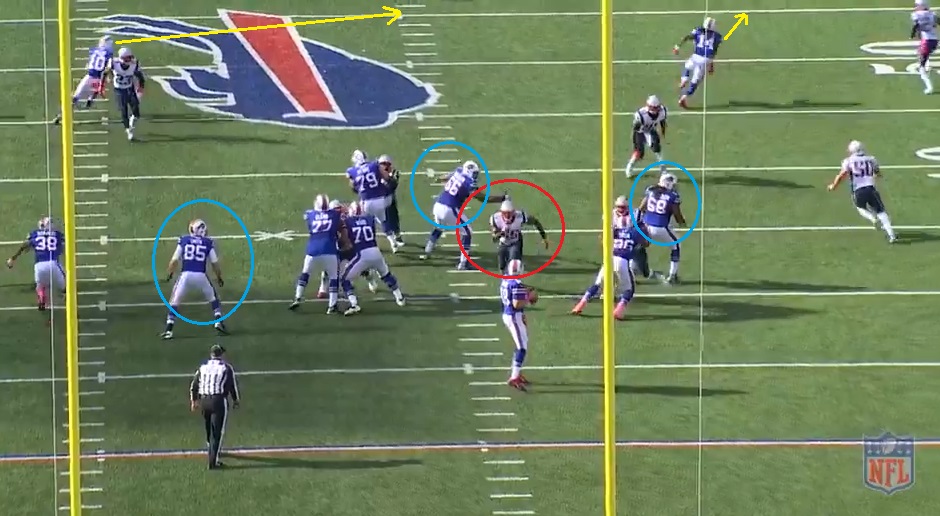 Bills fans saw this a lot last year when Mike Pettine was the defensive coordinator: he would frequently rush four and get pass rushers free shots on the quarterback while their blockers stood around. Think about how many times Nickell Robey came free last year, or when an edge rusher would get matched up on a back or tight end. This is where coaching and scheming really makes a difference in the NFL. Put your players in positions where they can make plays. There is no doubt in my mind that if the linebacker is picked up, that this is a 20-25 yard gain to Woods.

The play-action, max protect shot play should be a staple of the Bills offense. It fits in perfectly with their offensive philosophy. However, the reason why I say "should" is because if they are going to execute it like this, then you might as well hand it off.