The Buffalo Bills have a tall task ahead of them trying to defend against a dynamic Detroit Lions passing offense this Sunday.

The Buffalo Bills get to face Matthew Stafford and the potent Detroit Lions offense this Sunday. The Lions have passed for the seventh-most yards to this point in the season, and receiver Calvin Johnson has the sixth-most receiving yards, despite having just two catches last week. Buffalo’s defense will again have the tall task of containing one of the best passing attacks in the league.

Stafford’s passes have traveled 8.8 yards past the line of scrimmage on average. He’s been most accurate when throwing to his right (76.3 percent completions on passes to the right of the hashes), but that’s also where he’s throwing shorter passes. Stafford’s completion percentages and targets are depicted below. 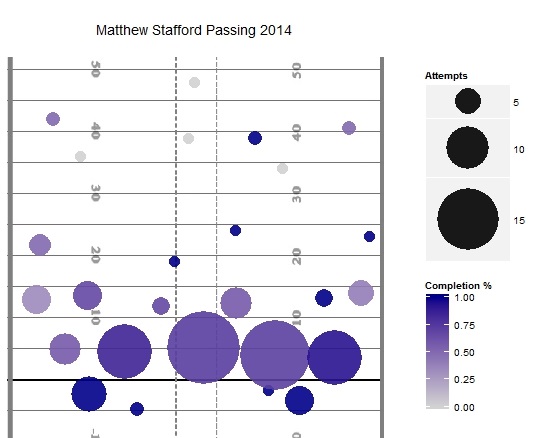 Johnson has been the most targeted receiver on the Lions. He also has been targeted further past the line of scrimmage than any other player on the team (15.9 yards on average). Seven of his targets have come off play action (three catches for 47 yards). Surprisingly, just four targets (and three catches for 52 yards) have come from plays where Johnson lined up in the slot.

Johnson has been targeted all across the field so far this season. However, Johnson’s deep targets, where he is potentially the most dangerous, have occurred mostly down the middle of the field. All of Johnson’s targets are binned below. 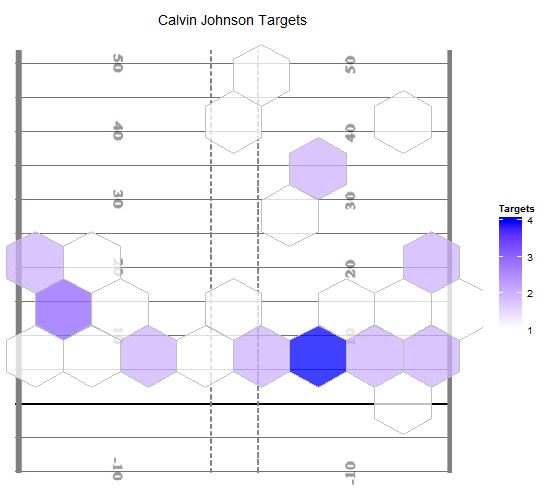 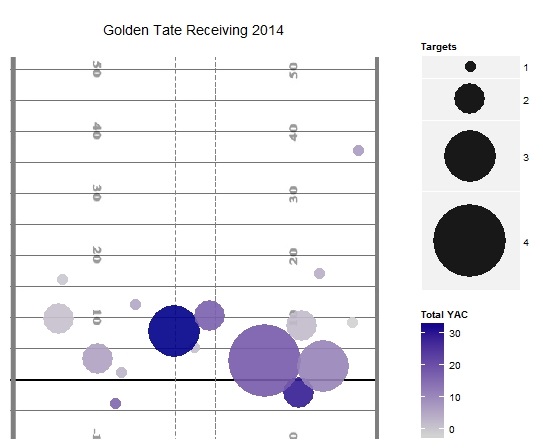 Reggie Bush and Joique Bell have combined for 39 targets and 27 catches for 185 yards. Aside from two Bush targets, the backs have come from the backfield when receiving passes. The Buffalo linebackers won’t have to worry about getting beat deep by these backs, though. They usually just run into the flat. 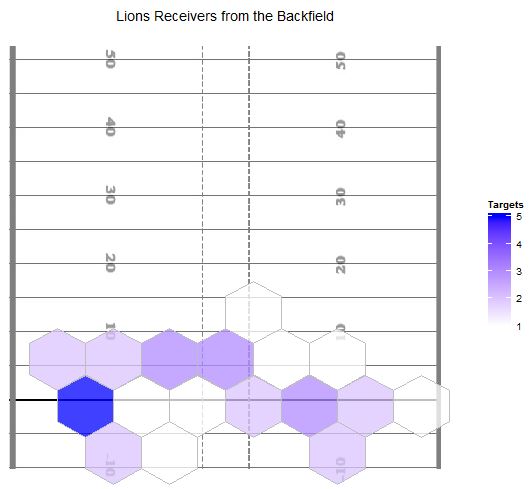 When covering receivers out of the slot, Bills defenders can cheat towards the middle of the field and watch for the short pass. The targets from the slot have been just 7.8 yards downfield on average and completed 80 percent of the time. 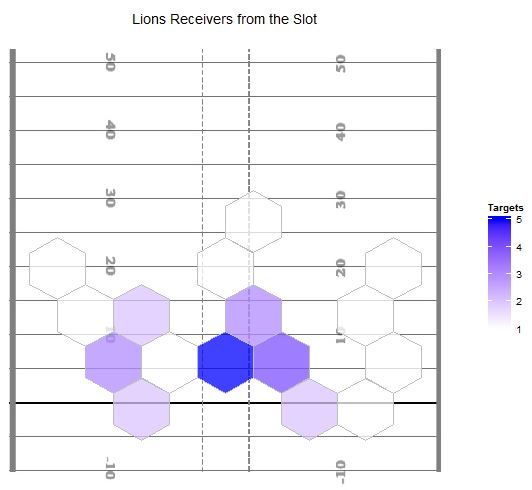 The targets from the slot are mostly a combination of Tate and tight ends (19 of the 30 targets). It’s a difficult combination of size and speed that exploits poor matchups. The receivers and their target statistics are below.

The Buffalo defense has been targeted short and left the most. Johnson’s strong sideline play could prove to be a difficult matchup, and the Lions could also exploit the flats with their running backs and tight ends. All of the targets against the Bills’ defense are below. 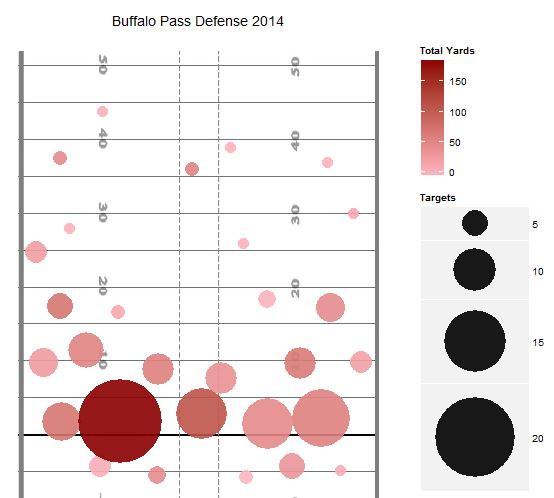 Stopping Detroit will be tough for the Bills. Johnson is a great receiver who can be open even when he’s double covered. Tate is dangerous in open space. The tight ends are big and fast. The running backs are explosive and shifty. Stafford is a great passer who has completed 50 percent of his 16 passes thrown 20 or more yards downfield (the NFL average since 2008 is 35 percent).

But there’s good news! Receivers out of the backfield are almost always running short. Slot receivers usually run short and to the middle of the field. If the Bills can focus on those keys, they will be able to commit resources to limiting the damage deep.