A major deciding factor in the Bills' win over Detroit on Sunday? Their dominant pass rush. Let's take a look at how the Bills powered through the Lions' dynamic passing offense.

The Buffalo Bills put on a pass defense clinic in their Week 5 win over the Detroit Lions, and it started with a pass rush that generated six sacks during a 17-14 victory. Let's examine the ways that Jim Schwartz, Marcell Dareus, Jerry Hughes, and the rest of the gang shut down Matthew Stafford and company on Sunday.

Let's not give all of the credit to Buffalo; there were some simple missed opportunities on the Lions' behalf. Take this play, which was Dareus' first sack of the day: if Stafford had delivered to a wide-open Eric Ebron at the top of his drop, the Bills may have faced an even bigger deficit than the 14-0 hole they managed to climb out of.

Once Stafford had his moment of indecision, however, it was all Dareus; he executed a swim move to get inside of guard Rob Sims, then split a double-team to power into Stafford's lap for the sack. 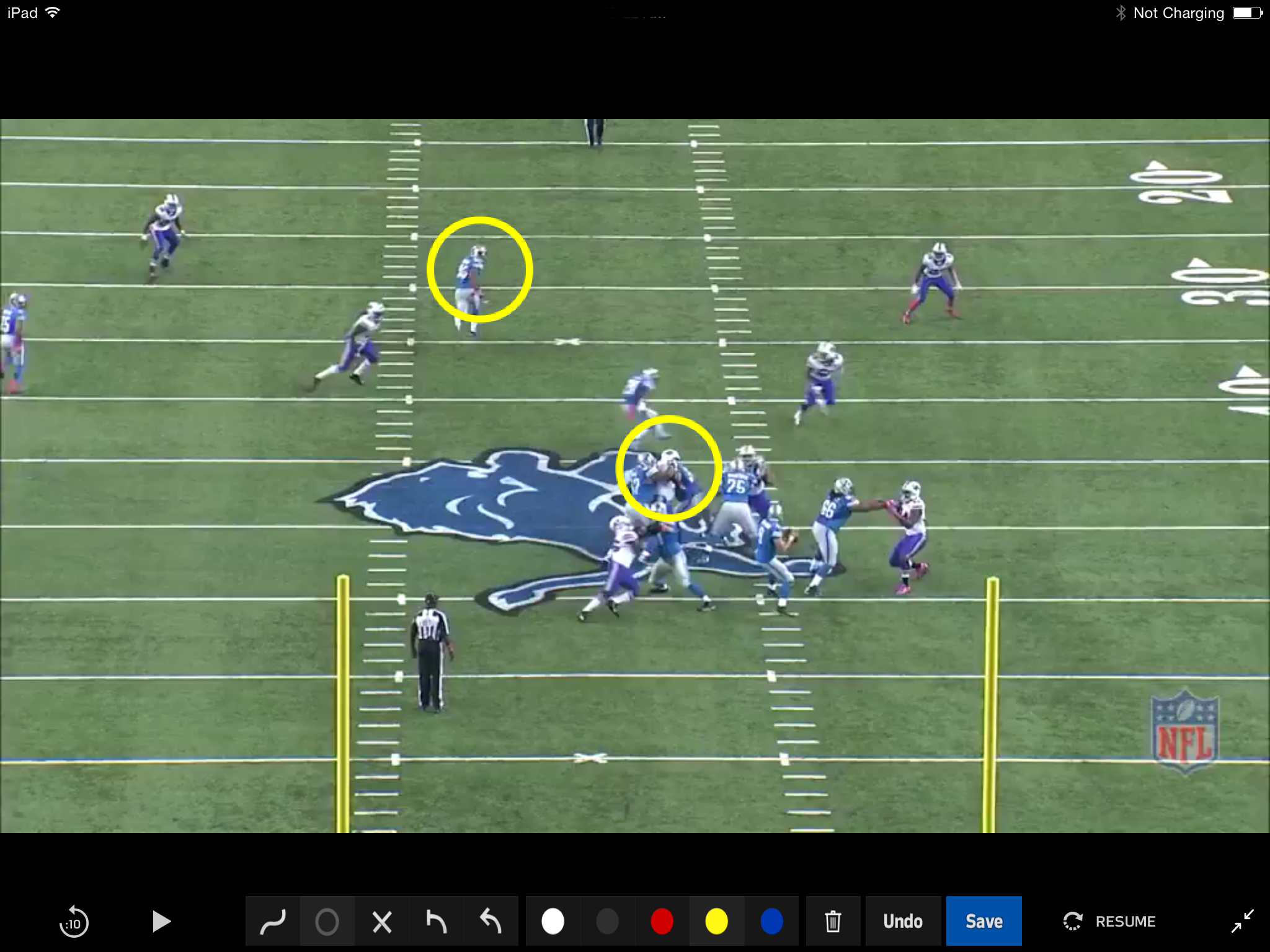 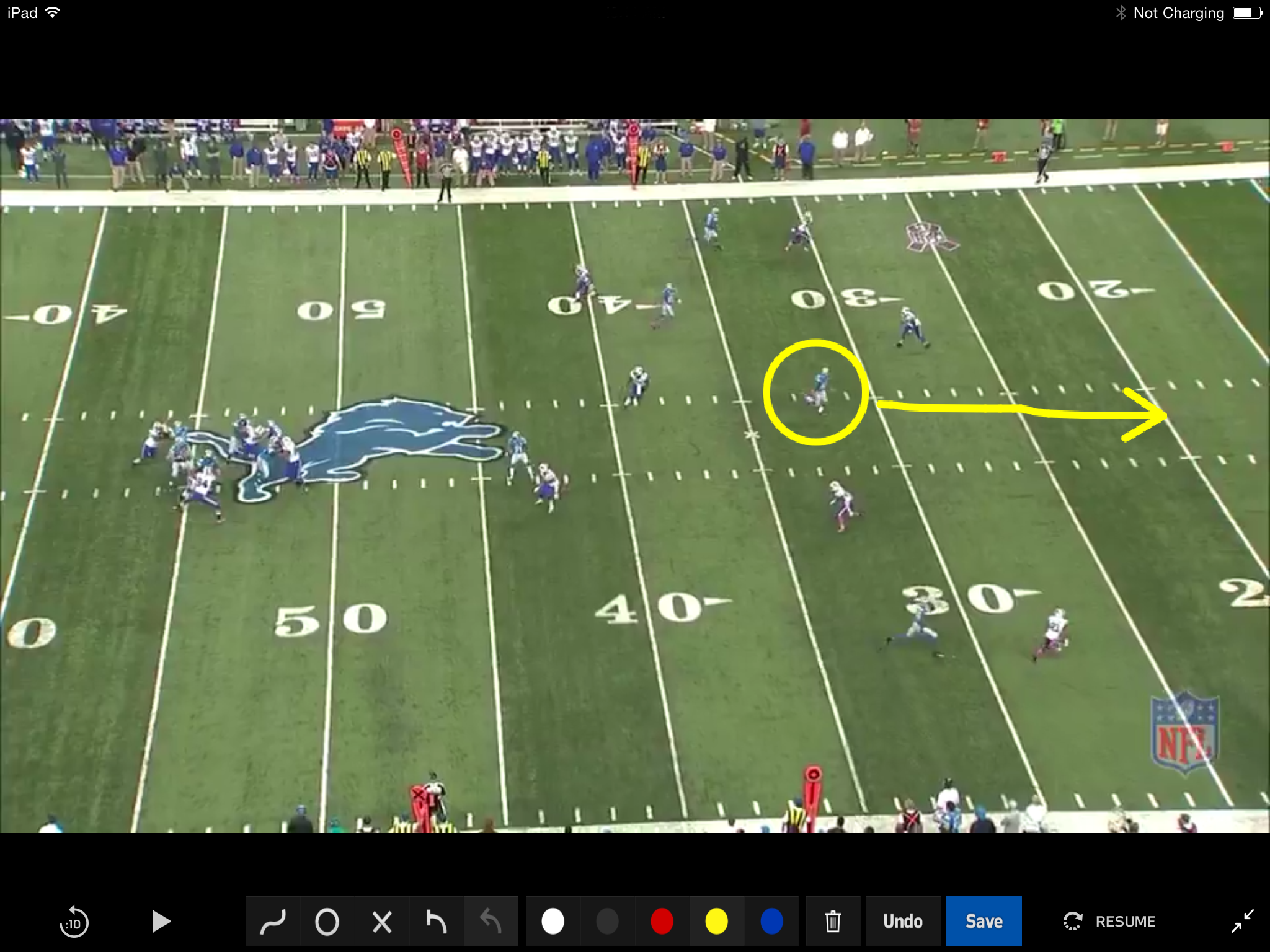 The Bills threw in some interesting pre-snap formations to keep the Lions on their toes. In the still below, the Bills tweak their base defense, taking out linebacker Keith Rivers in favor of a fifth defensive linemen (Corbin Bryant, lined up in front of Brandon Spikes). Buffalo rushes three, drops eight into coverage - including both ends, Mario Williams and Hughes - and still get to Stafford. 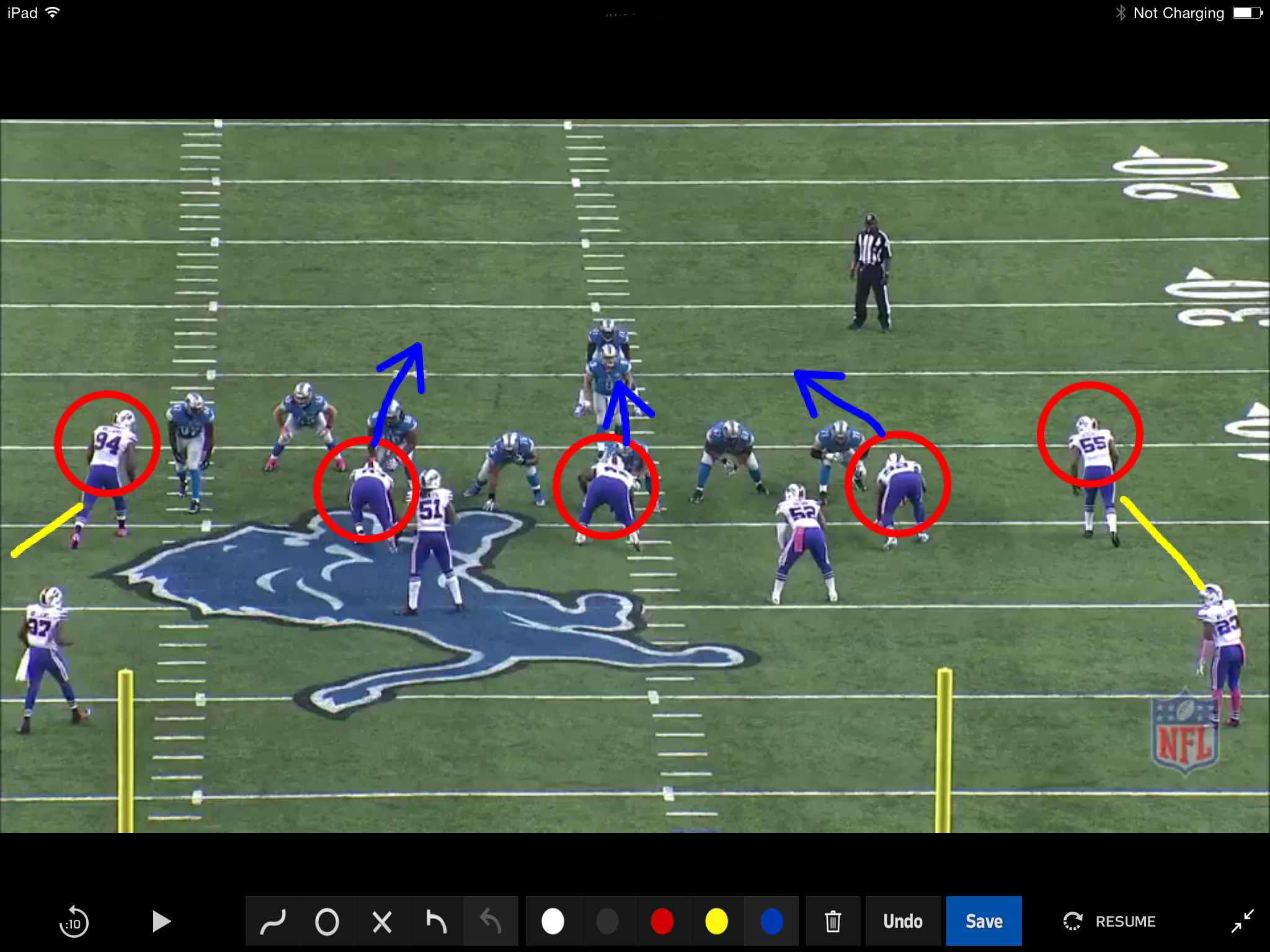 Part of the reason for that: Stafford fixates on a quick hitch, anticipating more rushers, and safety Duke Williams is already moving to cut off that route. Stafford doesn't have time to get to his check-down option, an open Reggie Bush in the flat. Bryant beats the right guard to the outside, flushing Stafford forward, and Dareus cleans up for his second sack. 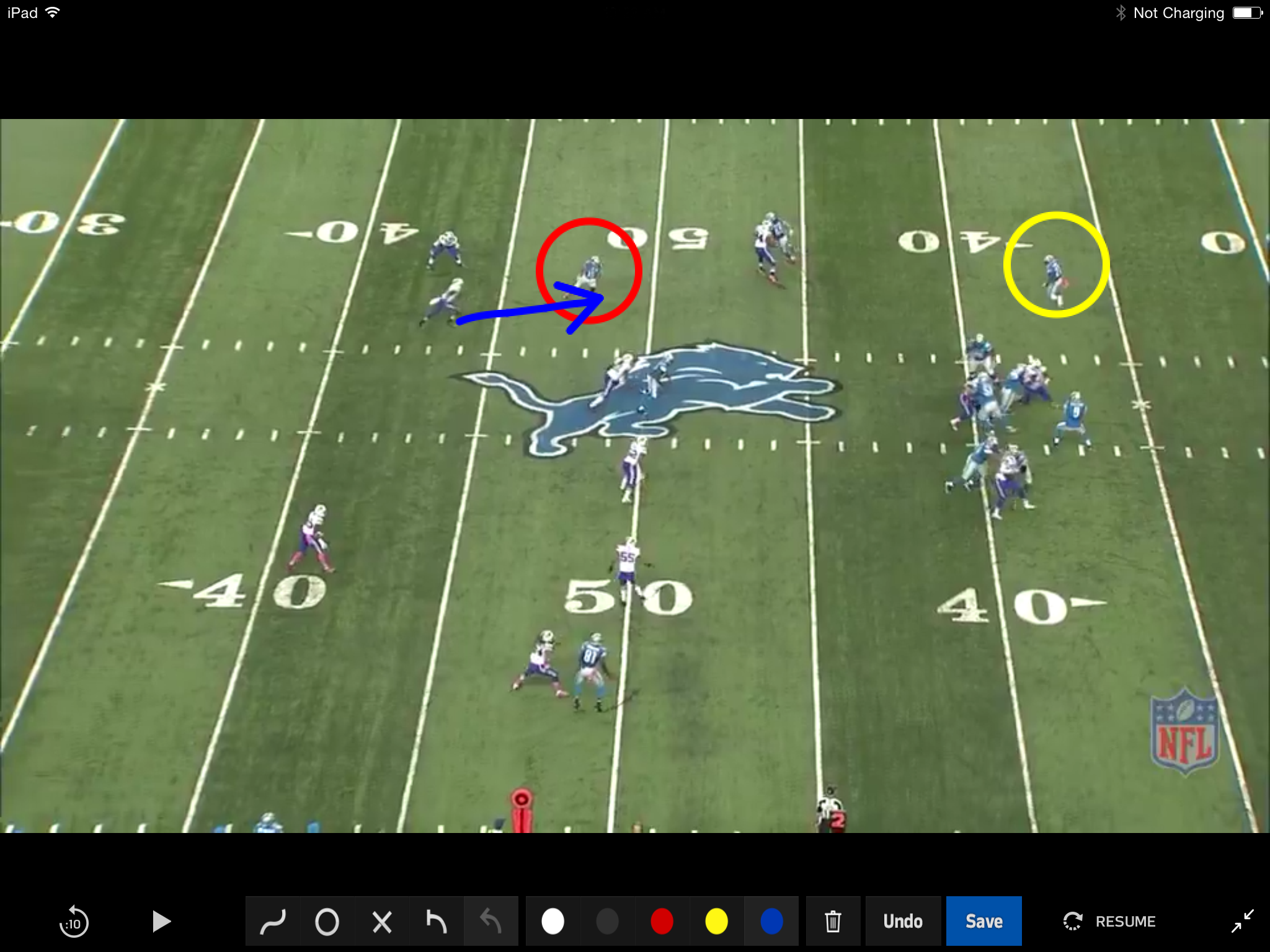 Obviously, if two defensive linemen are combining for five sacks in one game, something is going very, very right for that team. Dareus and Hughes were perfect foils for each other in Detroit, especially working against the left side of the Lions' offensive line.

Hughes' strip-sack of Stafford was the byproduct of an inside stunt, run by Dareus and Stefan Charles, flushing Stafford out of the pocket. Dareus, whose lateral movement skills should be criminal for a man his size, runs around the left guard with ease and puts a hit on Stafford, who manages to escape and gather to throw. 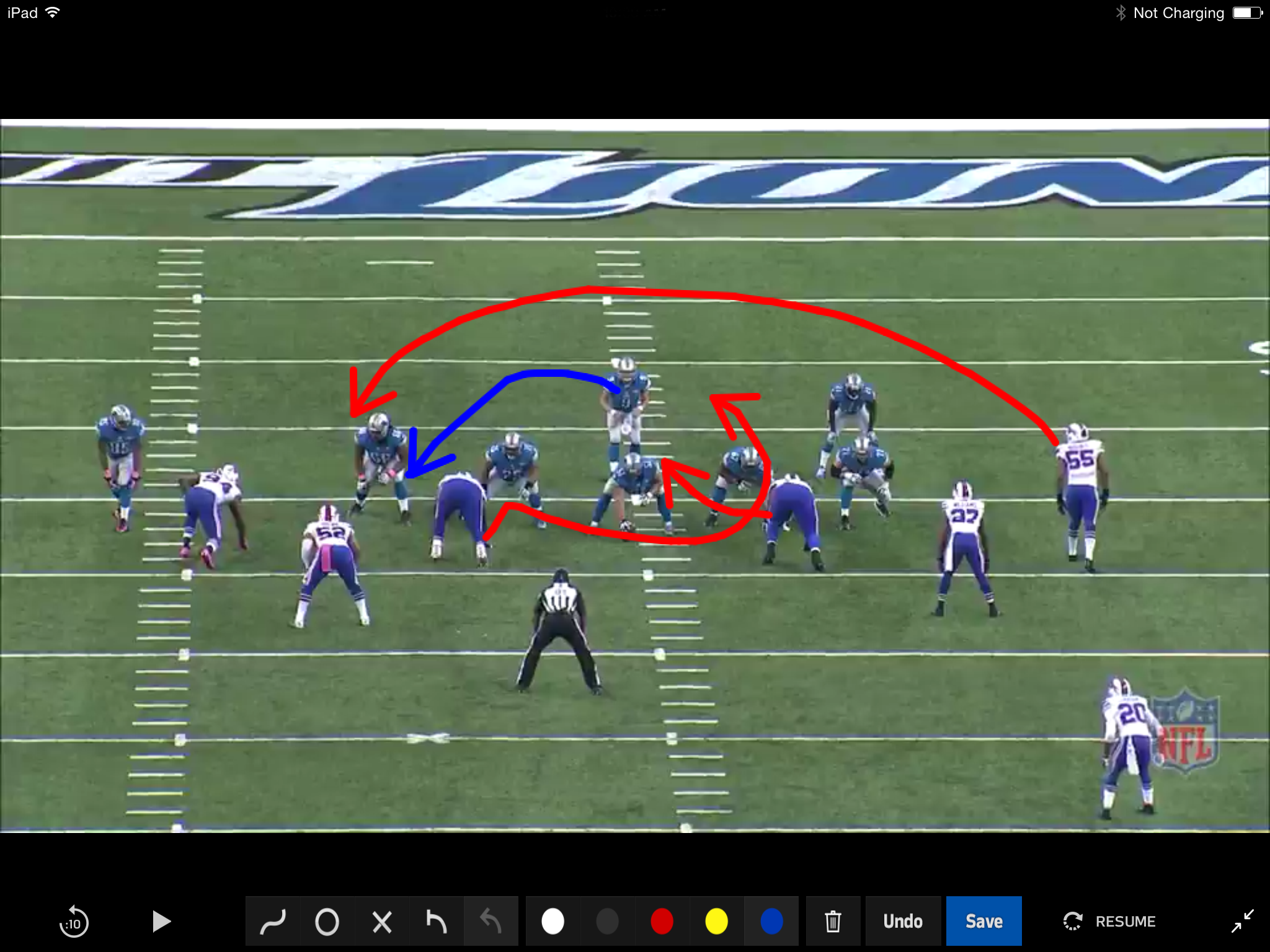 By the time that happens, however, Hughes has run clean around left tackle Riley Reiff and puts a vicious hit on Stafford, forcing a fumble (which the Lions recovered). That still below? It's a beautiful sight. 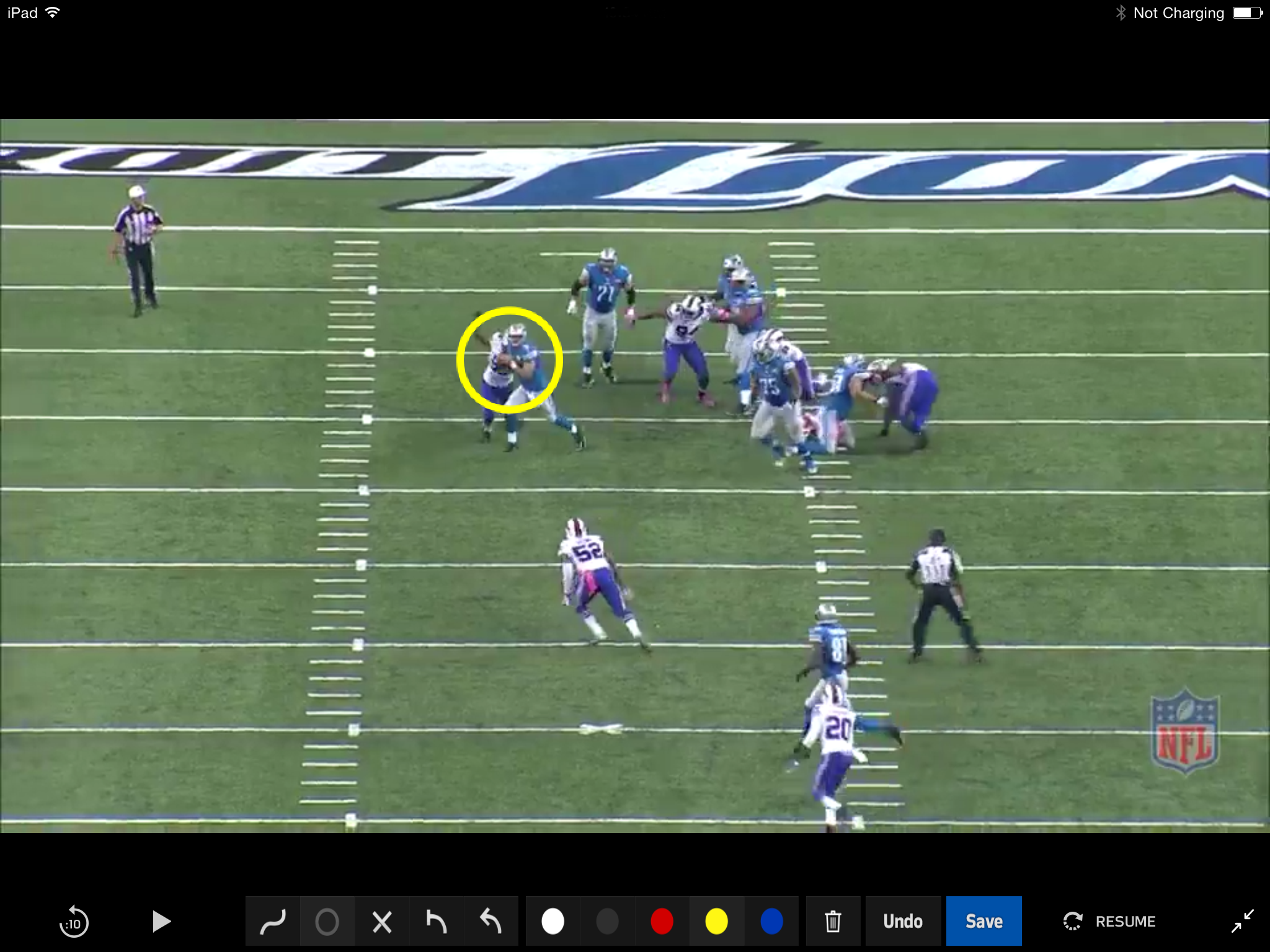 Hughes and Dareus, it should be noted, work together incredibly well when rushing the passer. This stunt is as basic as pass-rushing scheme gets, but the Lions' pair of Reiff and Sims couldn't handle it. Dareus attacks the B gap, getting on Sims' left shoulder to turn him, and then Hughes moves inside to attack the A gap. 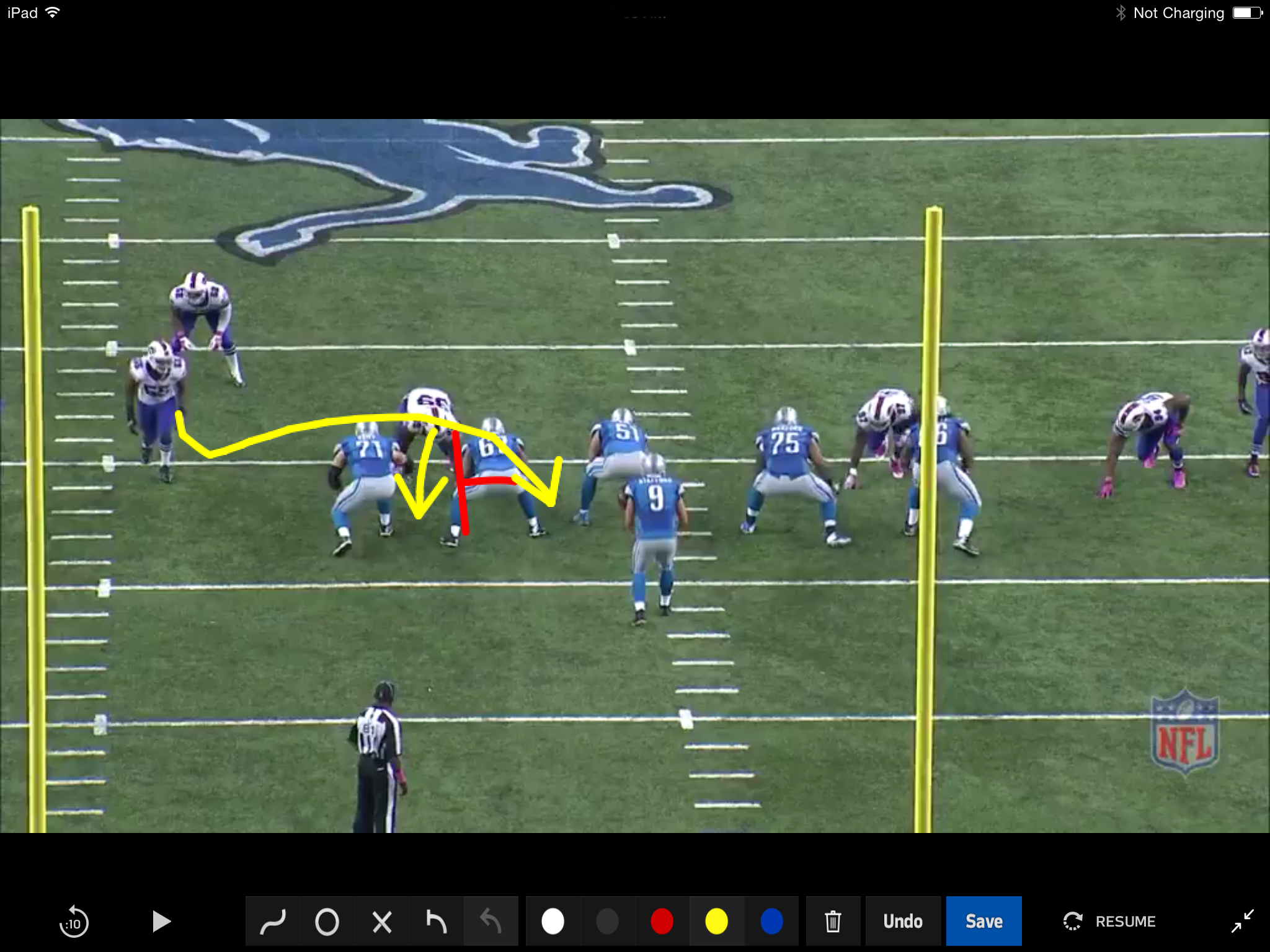 Technically, Detroit's line pair handled this fine; Sims is supposed to hand Dareus off to Reiff, then move right to pick up Hughes. The problem is, Dareus is so wide and powerful, and Hughes so quick, that the exchange is futile. Hughes ends up powering through Sims to collapse the pocket, and Dareus crunches Stafford for his third sack (and forces another fumble, which the Lions again recovered). 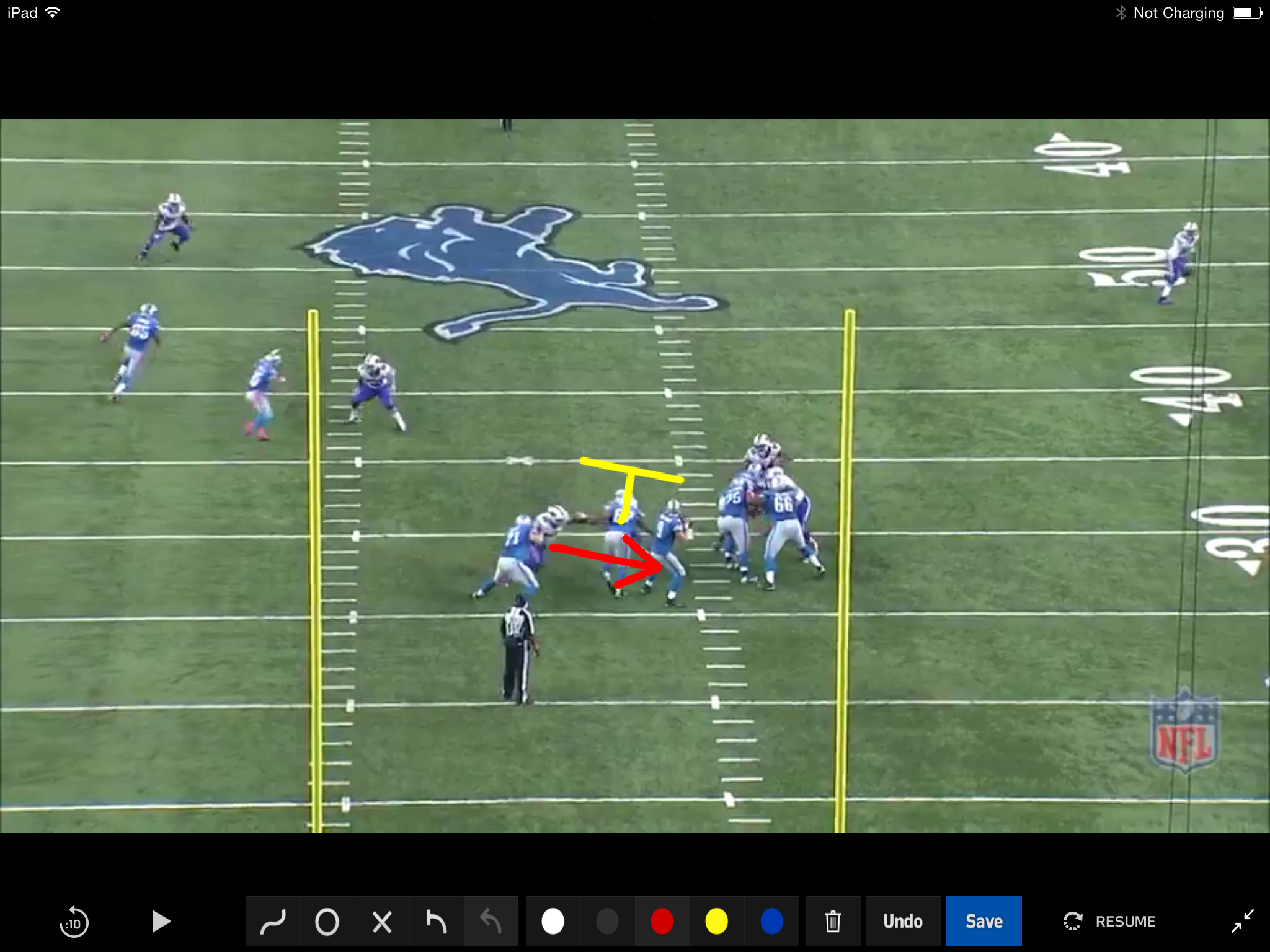 And then, this one

With just over two minutes remaining in the fourth quarter, tied at 14, the Lions are facing a 3rd & 10 at their own 25-yard line, hoping to move into field goal range. They did it on their next possession, but it wasn't going to happen here; Hughes bull rushed his way through Reiff to get to Stafford, effectively tackling both to bring Detroit's drive to an end. This might have been the single best play of Hughes' blooming career. 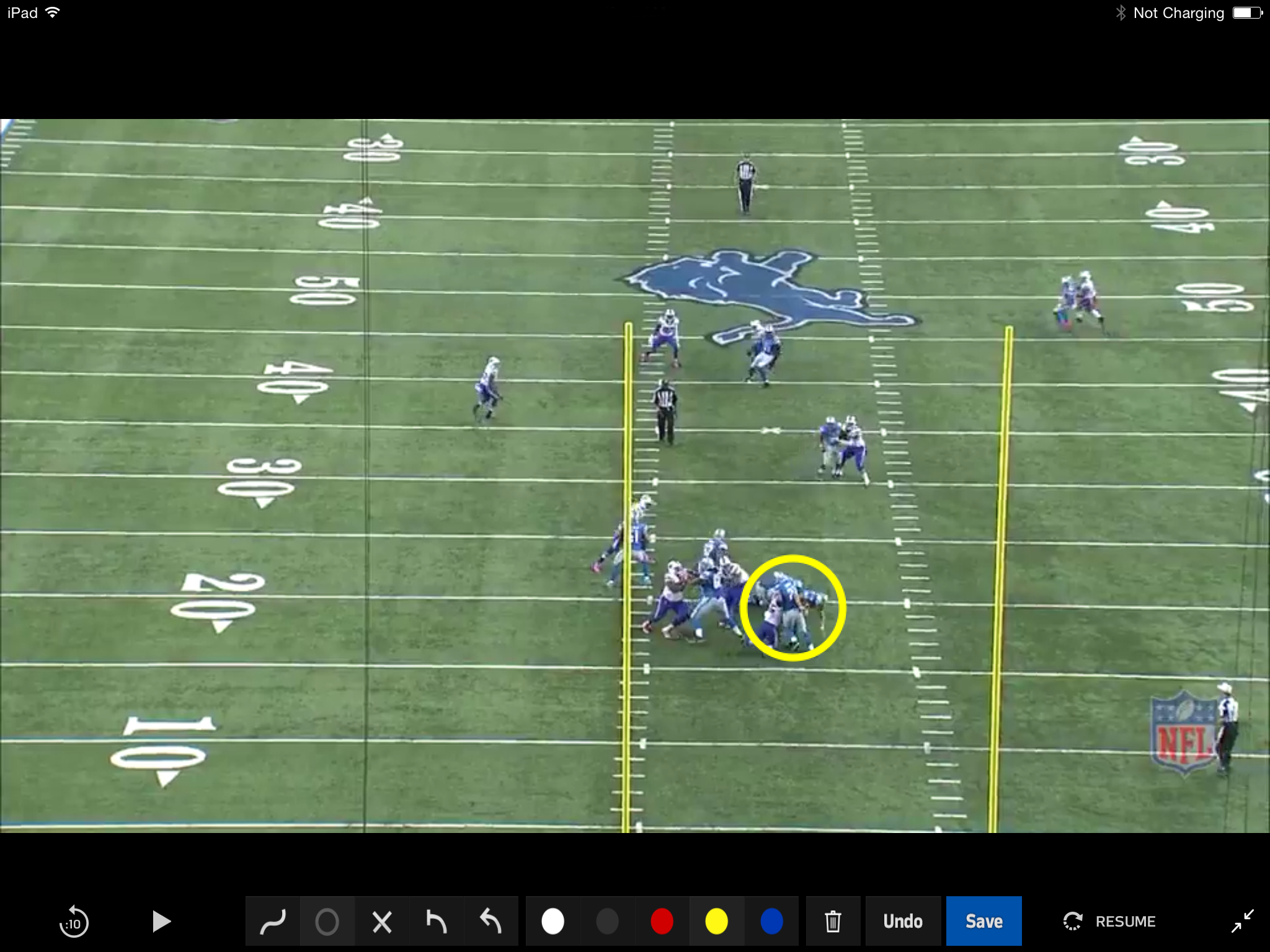 Today, the Bills have the eighth-ranked defense in the NFL, including a No. 2 overall ranking against the run, and are tied for first with 17 sacks through five games. It's not difficult to figure out why: their defensive line has been fantastic so far this season.