Some Bills fans continue to worry that the 4-3 defense run by Jim Schwartz will not be creative enough to succeed in Buffalo. It's time to address these misconceptions.

It's time to fix some misconceptions about defensive coordinator Jim Schwartz and the 4-3 defense he brings with him to the Buffalo Bills.

Spoiled by a season of Mike Pettine's multiple-front defense, Bills fans have openly worried for weeks now that the team will return to the statically aligned 4-3 front utterly lacking in creativity and flexibility that Dave Wannstedt ran here in 2012. This is simply not the case. Buffalo's defense is changing, perhaps for the worse, but that doesn't mean it isn't retaining some of the flexibility and (all of the) aggressiveness that fans covet. The Schwartz defense remains highly aggressive and flexible in its tactics, as evidenced in a Detroit Lions Week 1 win over the Minnesota Vikings last September.

On Minnesota's first offensive play from scrimmage, star tailback Adrian Peterson broke off a 78-yard touchdown run. That's something he's known to do from time to time. He'd score two more times in that contest - one on a four-yard run, and another on a short shovel pass - but Detroit largely bottled him up, allowing Peterson 15 rushing yards on 17 carries the rest of the way. They bottled him up by being flexible with alignments to adjust to Minnesota's varied blocking schemes. You may even recognize a front that the Lions used liberally to help contain Peterson. 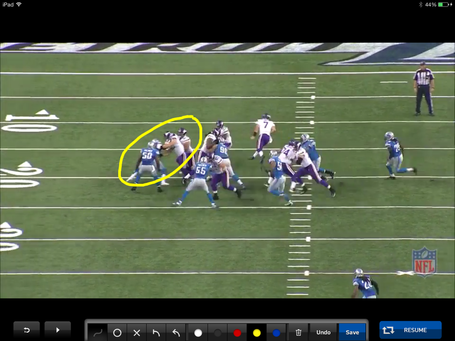 The Wide 9, the base defense most commonly attributed to Schwartz, is criticized as a run front because of the inherently wider gaps created by the alignment, but it also creates advantages: namely, it's a good defense for containing the outside run. Here, Minnesota tries to pull their right guard outside of the end to take on the strong-side linebacker, but 276-pound end Jason Jones drives tight end Kyle Rudolph so far backwards that he ends up taking out the guard, as well. Ashlee Palmer is freed up to sneak into the backfield and stop Peterson for a loss. 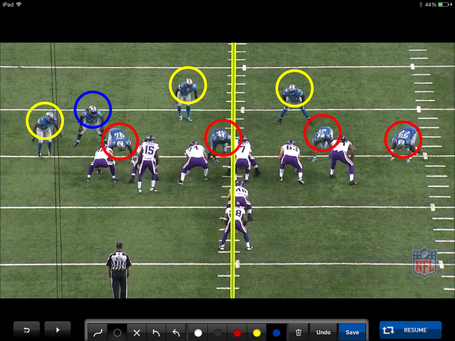 On several occasions, Minnesota attempted to run outside on Detroit by placing two blockers to the strong side of the formation. (In this case, receiver Greg Jennings came in motion to his position seen above to provide a seal on the edge.) Detroit responded by shifting to an under front and dropping safety Louis Delmas into the box, creating a close approximation of a traditional 46 alignment. 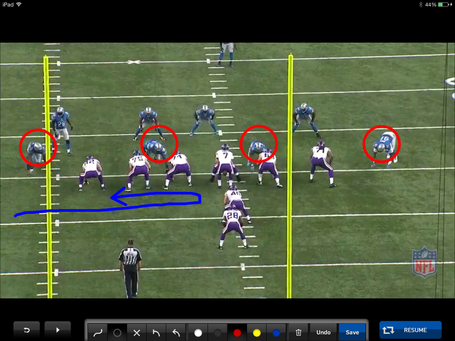 This is another way that Detroit handled the double-blocker formation created by Minnesota's motion. They're lined up in the Wide 9 here, but right end Willie Young (in red on the left side of the screen) will adjust inside to counteract the motion. 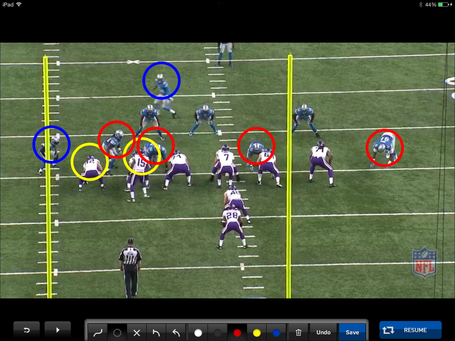 Young is now playing a more traditional 4-3 end technique from a standing position - the rest of the line stays put - and Young sneaks into the gap between Rudolph and left tackle Matt Kalil as the ball is snapped. This run went to the weak side, and was contained by the wide end, Jones, for a short gain. 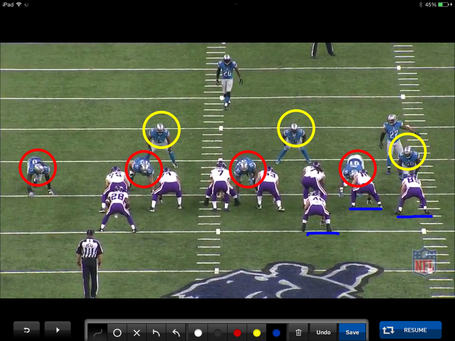 Minnesota would later start lining up two tight ends on the strong side of the formation, and Detroit's response was the same: under front, slide the linebackers with the strength of the alignment, and drop the safety. This alignment is very similar to the 4-3 Under base defense that the Bills ran under Mike Pettine, with the safety - it'd be Aaron Williams in Buffalo - a major factor in the team's ability to be aggressive up front. 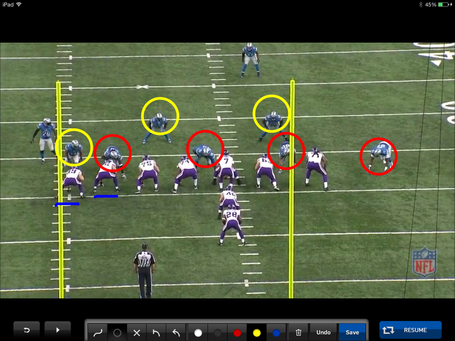 There seems to be a misconception that Schwartz, despite his best efforts to address them at his introductory press conference, will be running a static defense (schematically) without the same flexibility that Pettine's defense provided. We're not likely to see a defense as multiple under Schwartz, but that doesn't mean his defense isn't flexible, can't match up with various forms of offense, and isn't overtly aggressive. Detroit's defense was all of those things with Schwartz at the helm.