Do Manny Lawson and Jerry Hughes bring enough to the table for the Bills to feel comfortable about their defensive end depth?

In the first week of free agency, the Bills overhauled their linebacker position, moving Kiko Alonso to the weak side, signing Brandon Spikes to play middle linebacker, and also adding Keith Rivers as the likely starter on the strong side. That leaves Manny Lawson without a starting linebacker position, and GM Doug Whaley hinted that the 2013 free agent signee would be splitting time between outside linebacker and defensive end - where some have speculated that Lawson will be used as a complement to pass rushing specialist Jerry Hughes.

Let's take a quick peek at the roles that Lawson and Hughes played in last year's defense to surmise what a rotation of those two players at defensive end might look like. All of these stills were taken from the Bills' 19-0 win over the Miami Dolphins in Week 16 last season; that was easily the Bills' best defensive performance of the season, and we were treated to a good amount of diversity in the roles each played that Sunday. 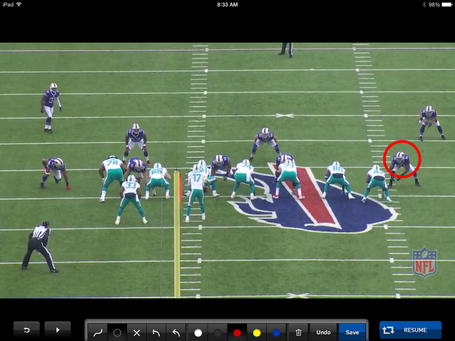 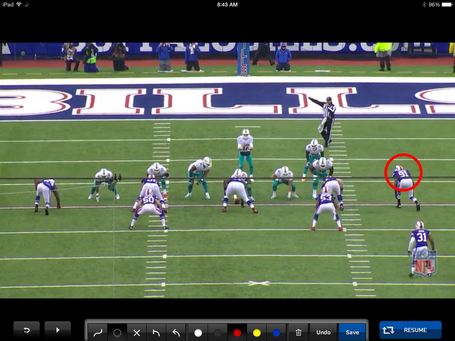 When both players were healthy, Lawson and Hughes split reps based on personnel packages. There is a misconception that Lawson came off the field on passing downs, but this is not strictly true; we'll get to that in a moment.

Lawson was, by name, the strong-side (Sam) linebacker in the Bills' base defense, which was a 4-3 under. Against Miami, Lawson lined up in the base defense 10 times, and nine of those came in that position (which you can see in the first still above). This was a coverage-first role; he was responsible for the tight end, whether that be covering him in space or containing the edge against his run block.

The second still was the one time in the game that Lawson's role flipped with Mario Williams: there, Williams is the strong-side linebacker, and Lawson was the rush end on the weak side. Buffalo did not do this often for the obvious reason that doing so would not have played to each player's strengths on a too-frequent basis. 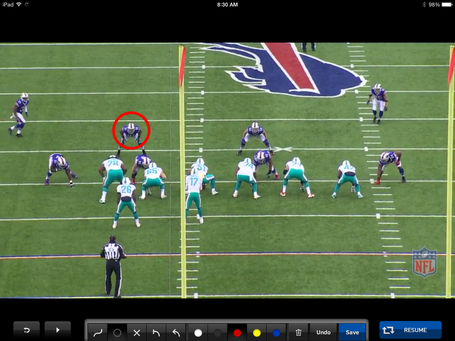 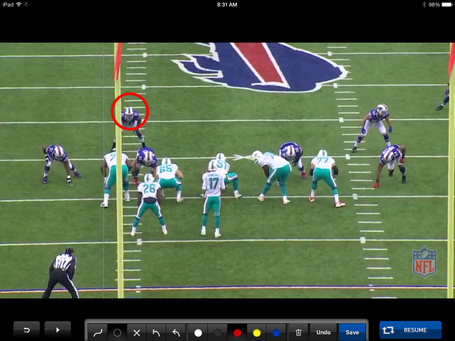 Buffalo did not often run a traditional nickel package under Pettine. Or, rather, they ran a "heavy nickel" more frequently than your average NFL team, where instead of a third cornerback subbing in for the strong-side linebacker, a safety would sub in for the weak-side linebacker (usually Nigel Bradham). That left Lawson lining up as a traditional linebacker in the team's only nickel look used against Miami.

In fact, Lawson played off the line of scrimmage quite a bit. Against Miami, he did so on 14 of his 24 snaps, playing the weak-side role in the team's nickel package. That allowed middle linebacker Kiko Alonso to more often match up with tight ends in coverage, while Lawson handled the flats and backs. Again, this was a coverage-first role, with Lawson taking on interior linemen in the run game.

Lawson's role last season was that of a coverage-first player for Pettine. Against the run, he proved himself to be a consistently proficient edge-setter, and that is easily his most endearing (if only) skill when projecting him to a base 4-3 end. In his 24 snaps against Miami, he rushed the passer just three times - and two of those rushes came after his coverage assignment stayed in to pick up a blitz. He rarely put his hand in the dirt to rush the passer, and didn't do it once against Miami. 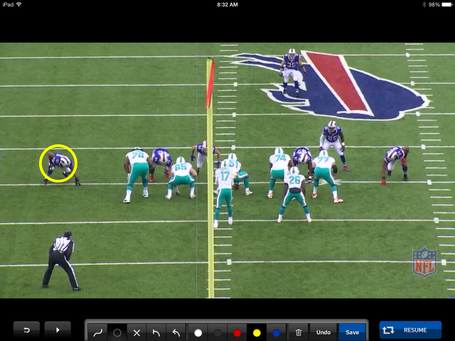 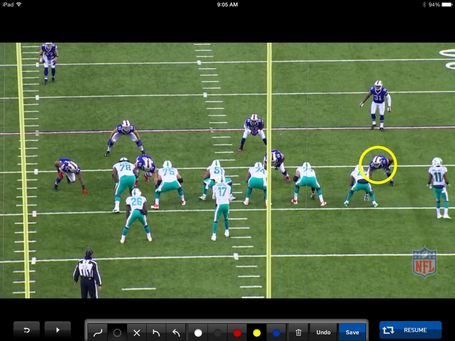 The Bills transitioned straight from their heavy nickel to a dime defense against Miami, and only then did Hughes make it onto the field. Buffalo played a lot of dime defense in their shutout win, with Hughes' 30 snaps trumping Lawson's 24.

This, by and large, is how Hughes lined up on the majority of his snaps with the Bills last season - when Lawson wasn't injured, that is. 26 of his 30 snaps came out of this alignment, with 20 of those 26 snaps coming as the right defensive end (with Williams at left end). When Hughes was lined up at left end in this defense, Williams flipped to the right side. Hughes stood up three times, but his hand was otherwise in the dirt - and he was always lined up well outside of the tackle, like you see in the first still above. He dropped into coverage a handful of times, but mostly provided a speed rush off the edge, picking up a sack and a few hurries on the afternoon. 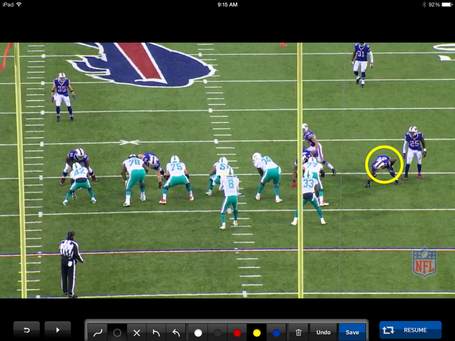 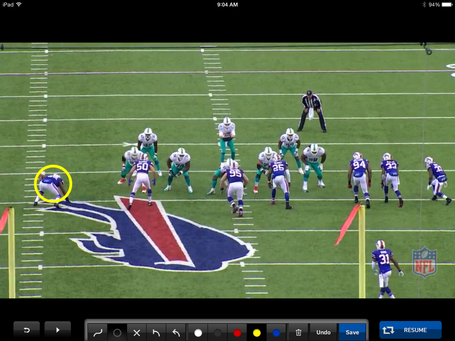 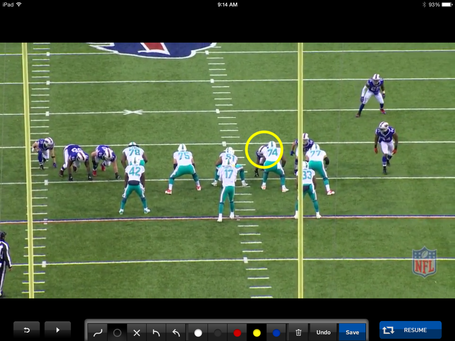 Above, you see three of the four plays against Miami in which Hughes participated in a defense other than a strict dime. Twice, he lined up in an unbalanced formation, on the same side of the line as Williams, with two defensive tackles making up the other side of the line. He did so lined up over the guard once, and at his usual end spot with Williams over the guard the other time. He also lined up in his traditional end role in a personnel package featuring seven defensive backs.

In summary, Hughes was predominantly a pass rushing specialist, but his value extended a bit beyond that: his athleticism also served as a focal point in Pettine's blitz schemes, as the team could comfortably drop Hughes into coverage on occasion while overloading the rush from the opposite side of the formation. It's not clear whether Hughes will have that same utility under Schwartz, but his pass rushing abilities translate to any system - maybe even Schwartz's Wide 9 in particular.

Between Hughes and Lawson, the Bills have a wide variety of skills to deploy - but they also do not have a snug fit for the traditional role of a base 4-3 defensive end. That remains a need area for the team, especially since Lawson is a much more useful player in a more linebacker-oriented role. That, or they need to ensure that Schwartz tweaks his scheme to incorporate looks that better suit the skills of two of his top three edge defenders.