Why did the Buffalo Bills struggle to pass on 3rd & short?

The Buffalo Bills were the second-worst passing team in the NFL on third and short in 2013 - but it probably didn't have to be that way.

Share All sharing options for: Why did the Buffalo Bills struggle to pass on 3rd & short?

The Buffalo Bills ran a pass play on 74 of their 114 third downs with five or fewer yards to go in 2013 (113 when you exclude a spike). Just 30 of those plays were converted into first downs. If you count the two scrambles (which didn’t result in first downs) as rushing plays and count the spike play, the Bills converted 41.1 percent of their third and short passing plays into first downs. Only Pittsburgh was worse in 2013.

The NFL average for converting first downs from third and short passing plays was 48.5 percent. 14 teams had a rate of 50 percent or better last season. As expected, the conversion rates for the Bills became worse as the yards needed for a first down increased, with one glaring exception.

For whatever reason, the offense couldn’t convert 3rd and 3 into a first down by passing. Just five of the seventeen passes thrown were caught, and the quarterback scrambled and was sacked in the other two plays. 3rd and 3 was a disastrous passing down and distance last season. Here’s where the passes went. 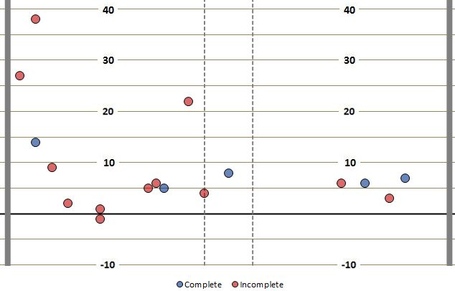 The 3rd and 3 plays weighed heavily on the Bills’ overall third and short conversion percentage on pass plays, since it was the most common situation they faced. After examining the plays, four factors may have played a role in the struggles with this particular down and distance.

A team’s entire season of passing plays on third and short has a limited sample size. The average conversion rates are likely to fall within a certain margin of error. Those margins increase with decreasing sample sizes, since a few results (like a run of failed 3rd and 3 plays) can skew the overall average quite a bit.

Stevie Johnson led the team with 19 targets on third and short. T.J. Graham became the preferred target on 3rd and 3, as he was the team’s deep threat most of last season. But Graham caught just 39.7 percent of his targets last season. That low percentage is a function of his role as a deep threat and quarterback inaccuracy. But even if that’s the case, why play a low percentage option on a critical down and distance?

The table below breaks down all of the targeted receivers. Graham is not the ideal target on third and short.

This one kind of ties it all together. The 2013 Bills, like almost every other team in the history of forward pass football, were better at completing short passes than long ones. The Bills also have quick receiving options that do a great job at getting open and gaining yards after the catch. Slant and drag routes (both are short, inward breaking routes) worked the best for the Bills on third and short. 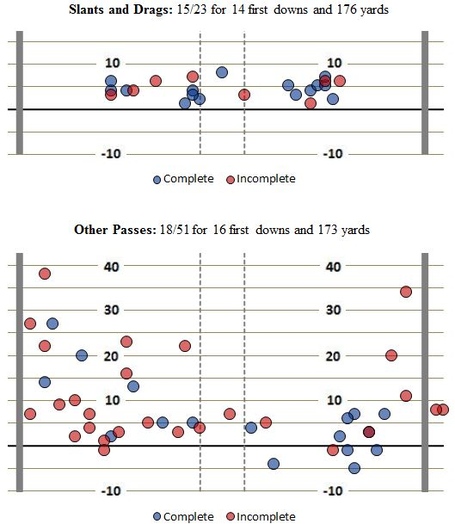 As you can tell from the passing chart at the top of this post, just three slants and no drag routes were targeted on 3rd and 3.

Now that we’ve obsessed over 3rd and 3, let’s look at a couple opportunities for overall improvement.

Johnson led the team in pretty much every receiving category on third and short, except yards after the catch (YAC). Fred Jackson was dominant in that category, as he was targeted on two screens, one slant, and one drag. He gained over ten yards after the catch on three of his four catches. Maybe Jackson could stand for more targets.

Slants and drags are great, given the current makeup of receivers on the roster and inexperience at quarterback. Short passes over the middle are effective for gaining the necessary yardage for a first down. They were completed 57 percent of the time, and receivers were able to gain an average of seven additional yards yards after the catch on those throws.

Finally, the poor results with three yards to go gives even more reason to attempt more rushing plays on third and short.

All of the passes thrown on third and short are below. What do you think? 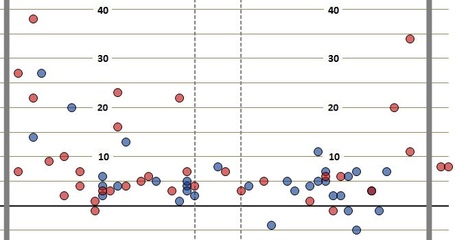