Analyzing the 2013 Buffalo Bills on third and short

The Buffalo Bills struggled a bit on third and short in 2013. Some numbers-crunching reveals a few interesting trends about the Bills' tendencies and successes in these situations.

Share All sharing options for: Analyzing the 2013 Buffalo Bills on third and short

The Buffalo Bills struggled to convert third and five or less into first downs in 2013. They converted just 49 percent of those third downs into first downs, compared to the NFL average of 52.8 percent. Just one playoff team, San Francisco, had a worse third and short conversion rate last season. To take the run/pass conversation analysis from a week ago a step further, I wanted to determine which rushing plays worked and which didn’t in these short yardage situations for the 2013 Bills.

In the 38 rushing plays, I counted four distinct play types (although their presentation and exact execution varied a bit): inside handoffs, designed quarterback runs, read options, and toss plays. (I excluded scrambles from this set, which accounts for the three-play discrepancy.) Of those play types, the read-options had the most attempts (19), followed closely by inside handoffs (14). The breakdown of those plays, including the first down rates, are below.

Designed quarterback runs were only used three times. They were also only used on third and very short (maybe one yard to go on average, although we don’t get that detail in the play by play data). But they worked. Quarterback sneaks (two of them) and a quarterback bootleg combined for a perfect three first downs on three tries. The bootleg was a thing of beauty. 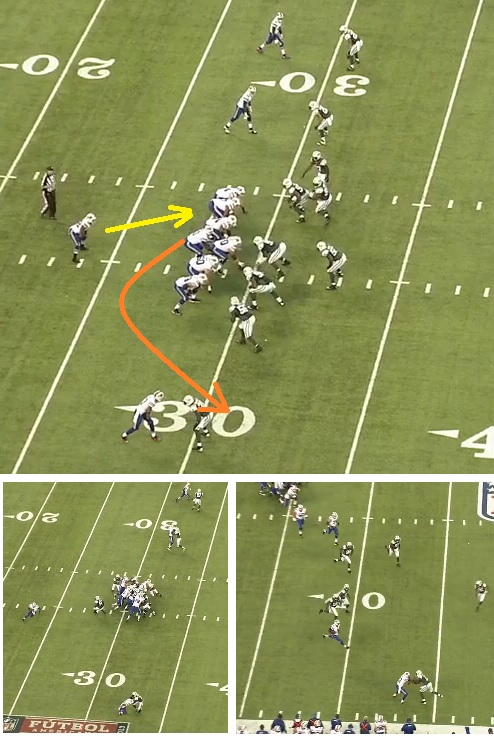 The toss play was used just twice by the 2013 Bills on third and short. Like the designed quarterback runs, they had a perfect conversion rate. Unlike the quarterback runs, however, they were run when the Bills needed four and five yards to get a first down. One went left and the other went right, and both were run by Jackson.

But the unsung hero on those runs was Frank Summers. He lead Jackson and cleared a blocker on both runs. The Bills used a fullback in just nine of their 38 short-yardage rushing plays, and converted 56 percent of those attempts. With more than one yard to go, a fullback was used six of the thirteen times and helped the Bills convert 50 percent of their attempts. This is a small sample size to draw any real conclusions from, but maybe the Bills' rushing more with more than a yard to go could be done with an increased utilization of the fullback.

All in all, we’re dealing with a small sample set. It’s probably too small to make any inferences, but the high success rate on plays where the Bills needed more than a yard to go and a fullback was on the field warrants more fullback utilization on third and short. Either way, here’s a breakdown of all of the play types by distance needed for a first down.