A long look at how the Buffalo Bills utilized Scott Chandler in the passing offense in the second half of the 2013 season.

In the second half of the 2013 season, Scott Chandler went from the second-leading receiver to the top gaining receiver on the Buffalo Bills. That upgrade was largely due to injuries and missed time from Stevie Johnson and Robert Woods. In all likelihood, Chandler probably wouldn’t have led the team in receiving yards if everyone stayed healthy.

A long look at how the Buffalo Bills utilized Scott Chandler in the passing offense in the first half of the 2013 season.

Chandler really wasn’t the team’s preferred target. He didn’t even take the receiving yards lead until the penultimate game of the season, a home win over Miami. The injuries and depleted receiving corps did, however, cause the Bills to use the big tight end differently in the final eight games. 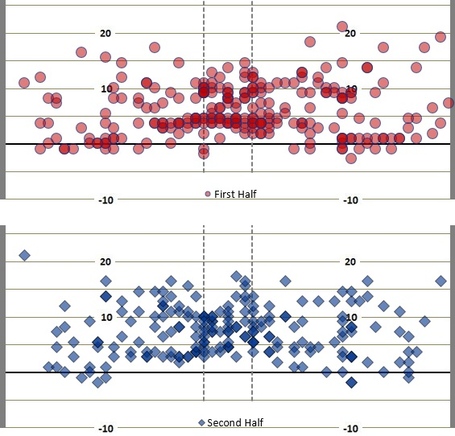 Chandler also progressed from a blocking and dump-off role to a true receiving threat in the second half of the year. He was asked to block or slip into the flat (or both) half as often in the final eight games than in the first eight. Those routes were converted to post routes, which stretched defenses vertically.

Speaking of efficiency, where did Chandler consistently win over the course of the season? What was the best mix of plays and utilization of Chandler and the tight end position in the Bills’ scheme?

On first down, Chandler averaged 5.7 yards per catch. He was targeted just 19 times on first down in the whole season, and 10 of them were on flat routes. Those flat routes, while not the sexiest of pass routes, averaged a manageable first down gain – 4.9 yards. To put that into perspective, the average rush on first down for all teams in 2013 (and the Bills ran the most of first down, about 64 percent of the time) resulted in a 4.14 yard gain.

Great, Chandler’s flat routes are a surprisingly good option for first down, since they’re better than the average rushing play, right? Wrong. The average pass on first down (excluding sacks, since we want to just compare plays that included a pass) went for 7.3 yards. Chandler’s flat route, if anything other than a bail-out option for the quarterback, is an inefficient play call. In fact, Chandler was an inefficient option on all targets on first down, since he averaged just 5.7 yards per target.

Chandler suddenly became an effective target on second down. The 2013 average passing gain on second down was seven yards per pass (interesting that it’s lower than on first down), but plays that featured a pass to Chandler on second down averaged 8.8 yards.

Second down was when Chandler ran the most of those curls to the middle of the field. (42 of them!) But if he ran a curl to the middle, it wasn’t likely he would be a target since just eight of those 42 curls resulted in a Chandler target. They averaged 10 yards per attempt, thanks to a little more than three yards gained after the catch per play.

The Bills’ quarterbacks targeted Chandler the most on third down than any other down, and those passes had an average gain of 8.7 yards. Unfortunately, Chandler was targeted the most on plays that turned out to be the least efficient. Slants and outs combined for 12 of the 30 targets, but averaged just 4.5 yards per target. Part of that was because those passes were complete 33 percent of the time.

Post routes were complete a perfect four out of four times and averaged 23 yards per target on third down. The best part of that was 41 percent of the yardage total was gained after the catch. Of course, the YAC average is skewed thanks to one 19-YAC play against the Jets, but he was held to fewer than eight yards after a catch just once on third down.

All of Chandler’s targets, organized by down, are below (darker points indicate a higher number of targets in that spot). You’ll notice that the routes spread wider and deeper on second and third downs.

Beyond where Chandler might go based on the down, opposing teams can also get a hint about which route the tight end will run based on his presnap alignment. For example, when Chandler lines up at a wing, he is most likely to run a flat route (66 percent of the time) and is probably going to run straight and deep (a seam or fly route) when lined up wide. Check out the distribution below.

The Bills started to find Chandler’s (or maybe just any tight end in their offensive system) best utilization in the second half of the year. However, his utilization was limited and inefficient on first downs. There is an opportunity to feature Chandler on deeper routes down the middle of the field, which also allowed for him to gain bonus yardage after a catch (even though one resulted in a costly fumble against Atlanta).

The tight end position was an important part of the Bills offense in 2013, but not the focal point. Will that trend continue in 2014? Incorporating more tight end passes could definitely help EJ Manuel’s progression next season.

69 percent of Manuel’s passes to a tight end were complete, and those plays averaged 8.1 yards per attempt. That’s a nice upgrade over his overall performance, including a 59 percent completion rate and 6.5 yards per pass. Maybe they grab a play-making tight end in two weeks and use him with Chandler (and not instead of him) to mimic New England's two tight end attack from a few years ago.

Anything to improve the team's offensive efficiency would be great. The tight end position might be a good place to start.