A long look at how the Buffalo Bills utilized Scott Chandler in the passing offense in the first half of the 2013 season.

Scott Chandler was the Buffalo Bills' leading receiver in 2013. Just four tight ends, including Chandler, led their teams in receiving yards last season (Jared Cook, Jimmy Graham, and Greg Olsen were the others). Buffalo’s leading receiver probably wouldn’t have been a tight end if the receiving corps stayed healthy throughout the season, but it shouldn’t be an indictment on Chandler. If anything, his play, and what he was asked to do, were absolutely critical to Buffalo’s passing attack.

I wanted to get an idea of where Chandler’s routes took him, so one portion of my charting was dedicated to mapping the tight end’s coordinates at the top of his routes. When he was targeted, it was the point on the field where he caught (or didn’t catch) the pass. When he wasn’t targeted, it was his location when the pass was thrown or at the top of his route (in the cases where the quarterbacks were under pressure or held onto the ball for an excessive period of time). The results of that exercise are below, with the darker points indicating a higher frequency of plays.

As you can see, Chandler often ran towards the middle of the field and ran very short routes. 36 percent of his routes went to the middle third of the field and went 10 or fewer yards past the line of scrimmage. However, just 24 percent of his targets came in this part of the field. More targets (36 percent) came on routes that went over 10 yards past the line of scrimmage. His first half targets are depicted below.

Another charted variable on each play was the route type. Like the route destination charting, I disregarded the portions of the play after Chandler broke off his route and just noted his final break. The total number of routes and targets, by route, are below. 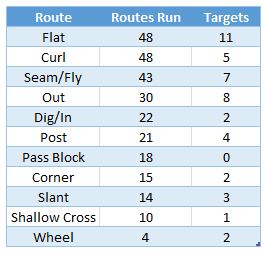 By far, Chandler’s first half targets came mostly when he ran into the flat (24 percent of his targets, the same as his short targets to the middle of the field). Chandler’s flat routes were often run after staying back to block in pass protection. Basically, Chandler was a dump off option in the first half of the year, since almost a quarter of his targets came in the flat.

But when analyzing the yards per route type, putting Chandler in the flat isn’t the most efficient way to use him. Despite being targeted on 23 percent of his flat routes and catching eight of those eleven targets, Chandler averaged just 0.73 yards per flat route run. Conversely, Chandler ran out routes less often in the first half of the season but gained 44 more yards and caught all eight targets. Chandler’s route efficiency, as measured by receiving yards per route run, is below. 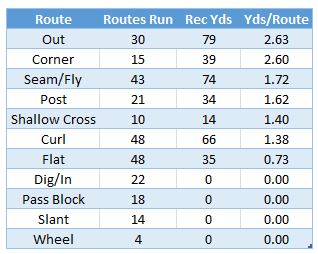 Chandler’s alignment also varied throughout the first half of the season. Ignoring the side of the field, Chandler lined up in six different areas of the offensive formation on pass plays. The plays, with their play counts and the team’s receiving yards from those pre-snap alignments are below.

Chandler was lined up in a standard tight end’s position next to a tackle and with his hand in the ground the most often. However, the Bills also had him lined up in a wing position, slightly set back from the line, the second most often. This formation also led to a higher yards per play average than any other alignment, which could be something to investigate further.

Chandler’ first half utilization didn’t vary too much. 35 percent of his routes were flats and curls. If a team wanted to cut off Buffalo's safety valve tight end, all they needed to see was the graphic below.

Next time, we’ll look at Chandler’s second half and see how his utilization differed when the receiver corps was depleted with injury.