Our All-22 dive into Manuel's strengths, weaknesses and areas in need of improvement from his 10-game rookie season.

EJ Manuel completed 180 of his 306 pass attempts (58.8 percent) as a rookie. The NFL average of all passers with 50 or more attempts was 61.3 percent in 2013. The average completion rate of those quarterbacks who started 10 or more games was 62.2 percent. Because Manuel was off that pace last year, what may have caused the lower rate, and is there hope for next year? 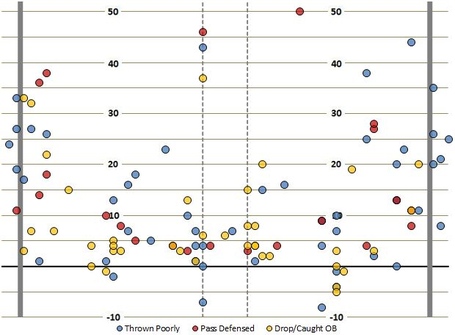 Drops are pretty easily understood. They’re passes that should have been caught, but the receiver was unable to make the play. In my classification process, I did my best to categorize drops on incomplete passes that didn’t require a spectacular play. My final total was 35 drops.

Passes caught out of bounds were catches that failed to be ruled complete because the receiver couldn’t land in bounds. These passes weren’t the errant passes that landed out of bounds, but the ones where the receiver failed to tap two feet in bounds. Scott Chandler had this great example of an on-target pass that was caught but ruled incomplete because the tight end failed to get his second foot down against the Ravens in Week 4. 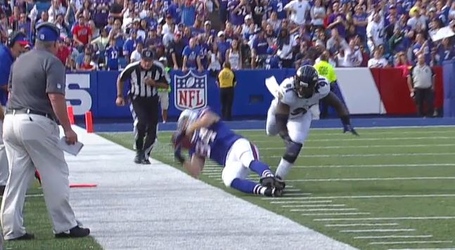 It’s tough to place the blame on the quarterback for these plays. Manuel had four of them.

The receivers are largely at fault for those two categories (although the latter is tougher than the former). Only two players and one group had five or more "receiver at fault" plays: Stevie Johnson (14), tight ends (6), and T.J. Graham (5). Here’s where they happened. 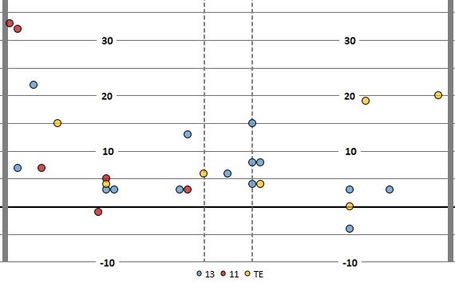 Incompletions categorized as "pass defended" were those broken up by a defender. They may have gotten their hand in to break up the play or hit the receiver when trying to make a catch, causing them to drop the ball. This incompletion is a good example of a very nice pass break up. 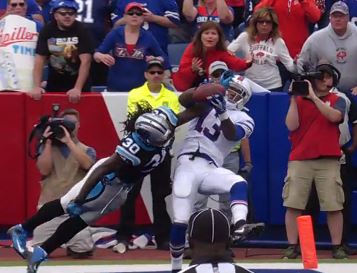 Plays where the receiver was hit and dropped the ball were placed into this category, but not all interceptions were defended (they might have been poorly thrown). 23 of Manuel’s incomplete passes were defended.

Passes thrown away were pretty easy to classify. If there wasn’t any receiver in the area, or the pass was wildly thrown out of bounds when Manuel was under pressure, it was a throw away.

Miscommunications are tough to classify, since we don’t know the play call. However, we do know when the passer and receiver aren’t on the same page. I counted just four of them, and none is better than this example.

Stevie never saw it coming. The pass was on target, though!

Lastly, there were the passes tipped at the line of scrimmage. Manuel’s height probably helps in this category, as just four of his passes were batted at the line. Only the Jets (one in each of the two meetings) and the Buccaneers batted down Manuel passes, which I found interesting. The common thread there is dominant defensive lines, particularly at defensive tackle, but it could just be randomness with a little confirmation bias.

The categorized incompletions combined with the complete passes shows a pretty interesting picture. Manuel attempted a lot of passes shorter than 10 yards past the line of scrimmage (210 of his 306 attempts). 142 of those passes (67.8 percent) were caught, while 28 were dropped or caught out of bounds and 22 were thrown poorly. 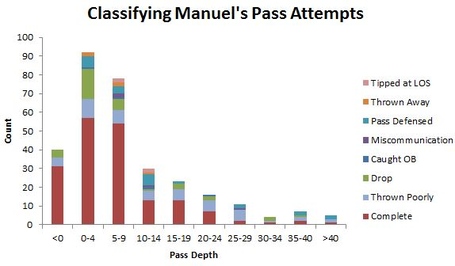 Clearly, Manuel needs to improve on his deeper passes, as there’s a sharp decline in his completion percentage on passes twenty or more yards downfield (30.2 percent in 2013). 35 percent of the 43 deep attempts were on target, while another 30 percent were overthrown.

He also could use a little more help from his receivers. 20 percent of the attempts (not incompletions!) to Johnson were incomplete because he dropped the ball or failed to get both feet in bounds. Graham did it on 17 percent of his 30 targets. Hopefully, Sammy Watkins and Mike Williams can convert their opportunities more often. It’d definitely change the way we perceive EJ Manuel.