Did the Buffalo Bills misuse C.J. Spiller, or was their scheme limited?

You've heard this before: "The Bills didn't use C.J. Spiller correctly last year." When it comes to the running game, however, was Spiller limiting the offense, or vice versa?

Share All sharing options for: Did the Buffalo Bills misuse C.J. Spiller, or was their scheme limited?

The NFL offseason is a dangerous time for fans. As our discussions shift in focus to what's on paper - depth charts, transactions, lists of free agents and rookies, and even finances - the far more tangible discussions, based on our observations of live football, fall by the wayside. Popular arguments in need of further study are put on the back burner for months, left to stagnate in our minds where they eventually become accepted as rhetorical fact.

One such example of this: "The Buffalo Bills didn't use C.J. Spiller correctly in 2013." Most often, this is applied to how Spiller was implemented into the passing attack, even though a nearly season-long ankle injury could very well have hindered the team's plans in that department. But many fans also consistently point out that the Bills didn't run scheme well for Spiller, either. How many times have you heard the "too much up the middle!" argument over the last several months?

The overarching fact here is that the Bills need to find ways to make Spiller much more efficient next season. But perhaps we also need to change a word in our rhetorical premise ("the Bills didn't use Spiller correctly"): maybe "didn't" should be "couldn't". One only needs to watch a single game from the 2013 season - a 23-carry, 77-yard effort against the Baltimore Ravens in Week 4 - for plenty of glaring evidence to support that conclusion.

Here are my notes on all of Spiller's 23 carries in that contest, which can be broken down into four basic running plays. 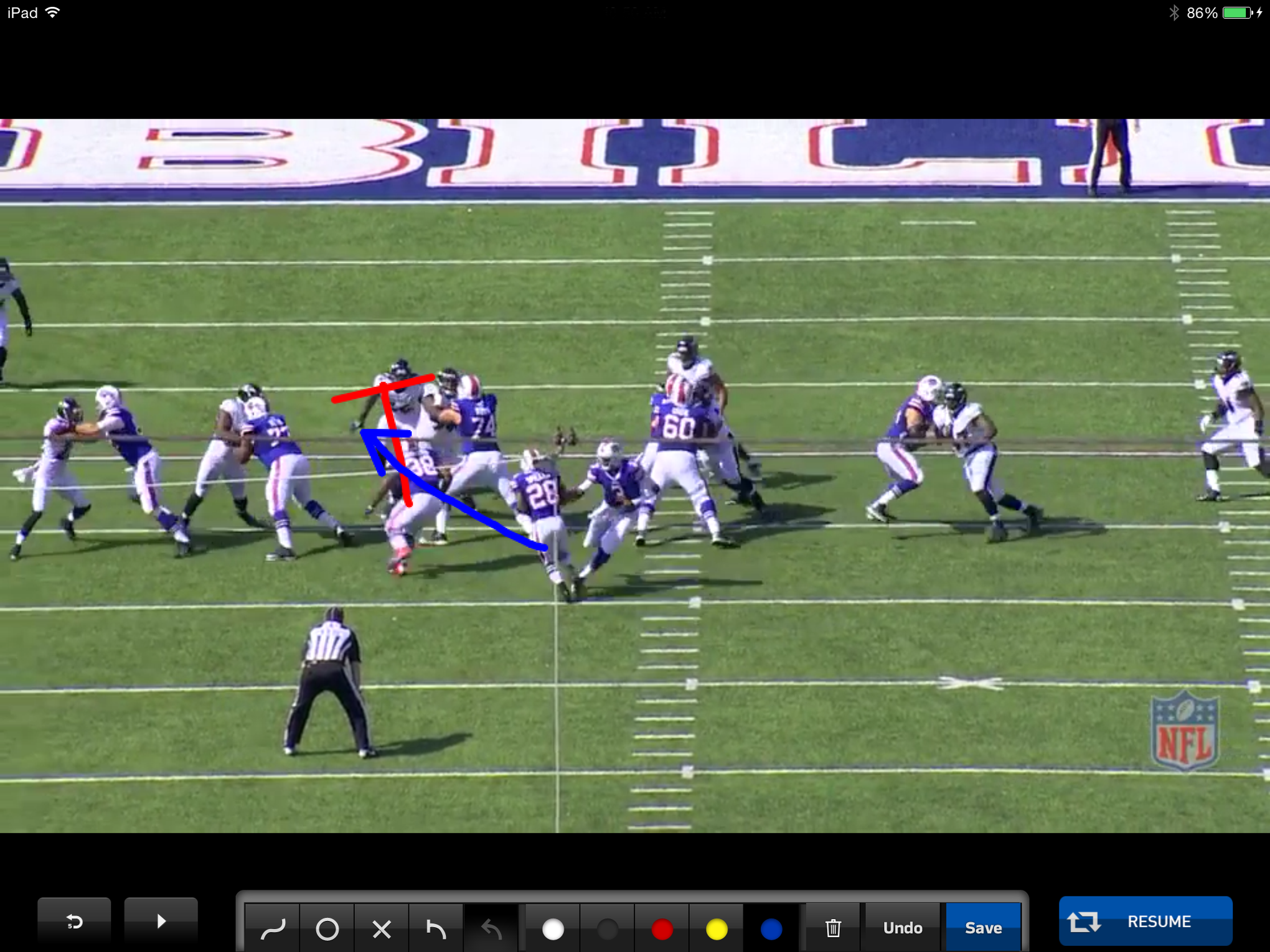 The dive is the most basic run in every level of football: toss in a lead blocker, have the runner follow him into a hole between the guard and the tackle. It's an extremely simple concept, which means it is seen often, and which makes it simple to defend - and therefore more difficult to block well.

Frank Summers, aside from one misread and one whiff on Terrell Suggs, had a standout performance as a lead blocker in Week 4 last season. He was on the field for a majority of these called runs, as was blocking tight end Lee Smith, who also had a strong outing.

Naturally, Spiller is a player that you'd like to see in space, and it's tremendously difficult for even the league's best offensive lines to consistently create massive running lanes on basic blocking concepts. Still, this was easily Buffalo's go-to run call with Spiller in the lineup on the day, because they were blocking it fairly well. When the Ravens started to defend it better, the Bills started running it out of a shotgun formation (twice), prolonging its success. 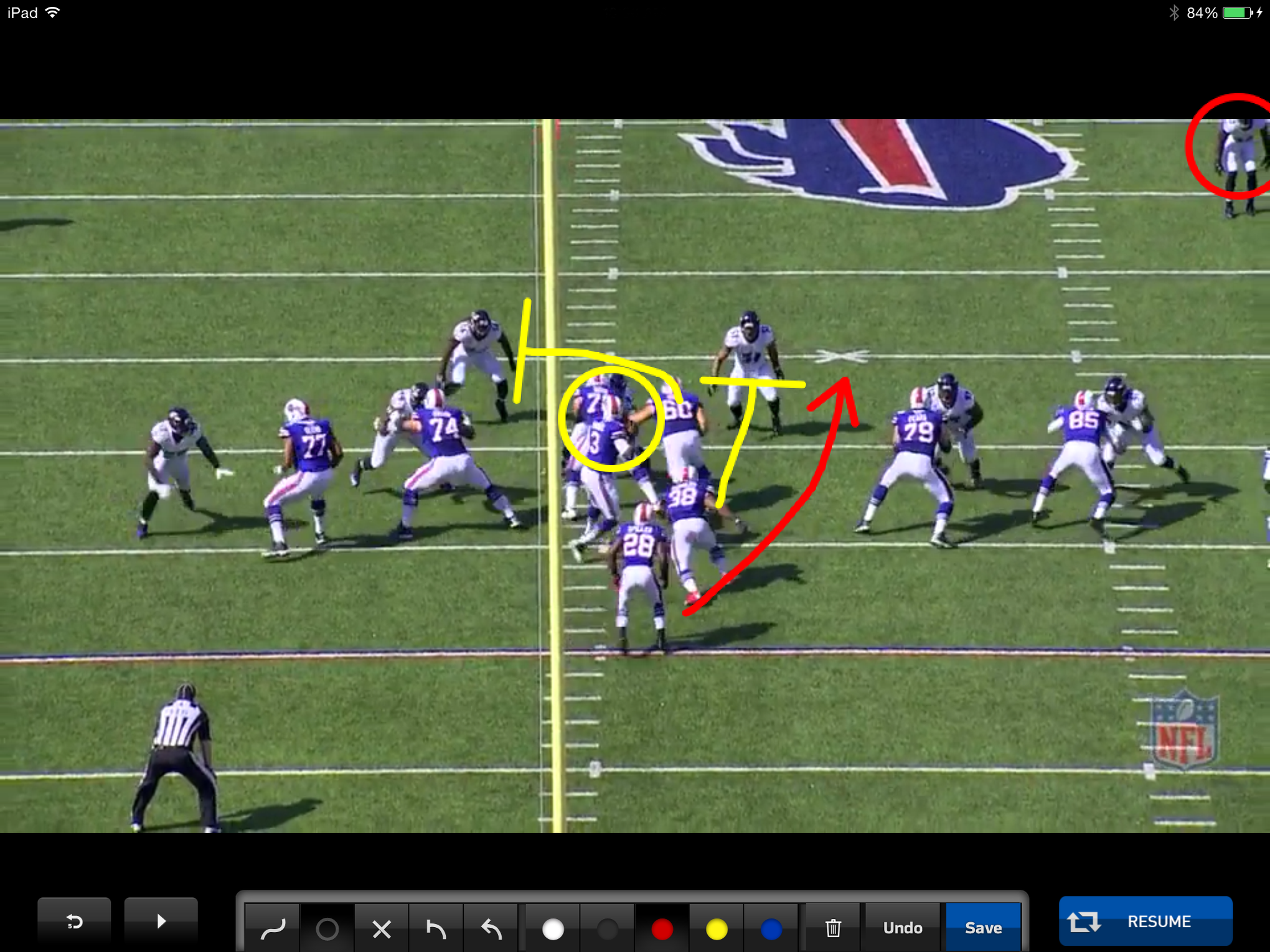 This is a run call at which, if used sparingly enough, Spiller should excel. Running lanes widen when unsuspecting defensive linemen begin to rush the passer, only to be shoved aside as Spiller takes the handoff. Early in this contest, the Bills favored a quick draw in which the center, a guard and the fullback blocked as if they were running a basic dive.

For a time, draws worked in this contest, but eventually the Ravens cottoned on, and Spiller was held to just three yards on his final three draw carries of the game. Spiller did not play much starting midway through the third quarter - this was the game in which he suffered the ankle injury that nagged him for the rest of the season - and running six draws that early in the contest shows an over-reliance on a play call, borne of a lack of other options that suit Spiller's skills. More on that below. 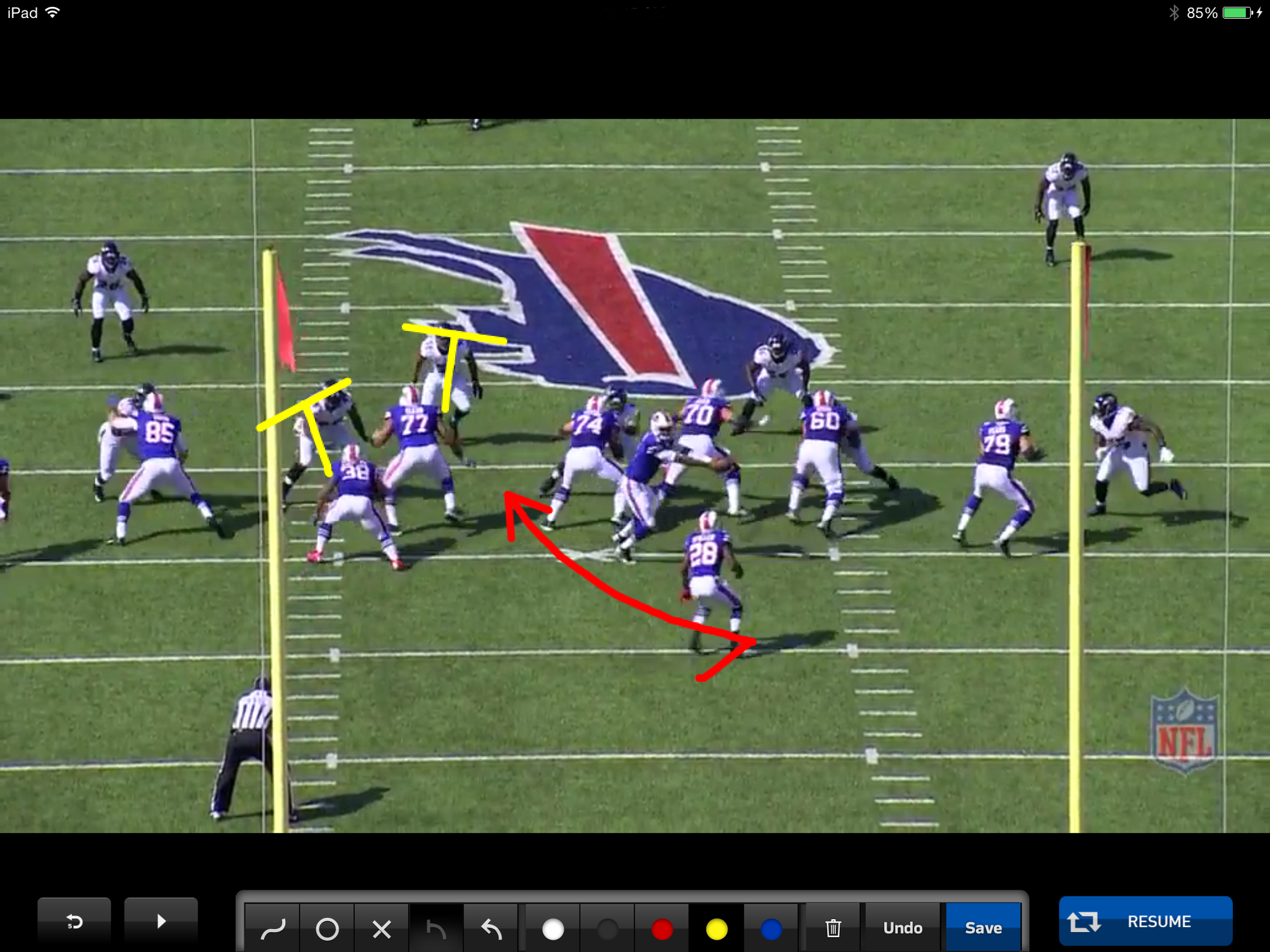 A counter run is designed to move the defense in one direction - with the quarterback's turn toward one side of the field, with the runner mirroring, and most importantly with the line slanting - and then attack the opposite side of the field. The still above depicts a counter into the strong side of the formation, but many times this is a weak-side run.

Buffalo had problems in this department. On one play, a miscommunication between EJ Manuel and Spiller led to a clumsy handoff and a loss of yardage. (It looked to me that Spiller started in the wrong direction, but without knowing the play call, assigning blame is just guesswork.) Most importantly, Buffalo's linemen also struggled here because of the delayed backfield action; that necessitates longer-sustained blocks. Erik Pears, in particular, had a bad effort on one of these runs. 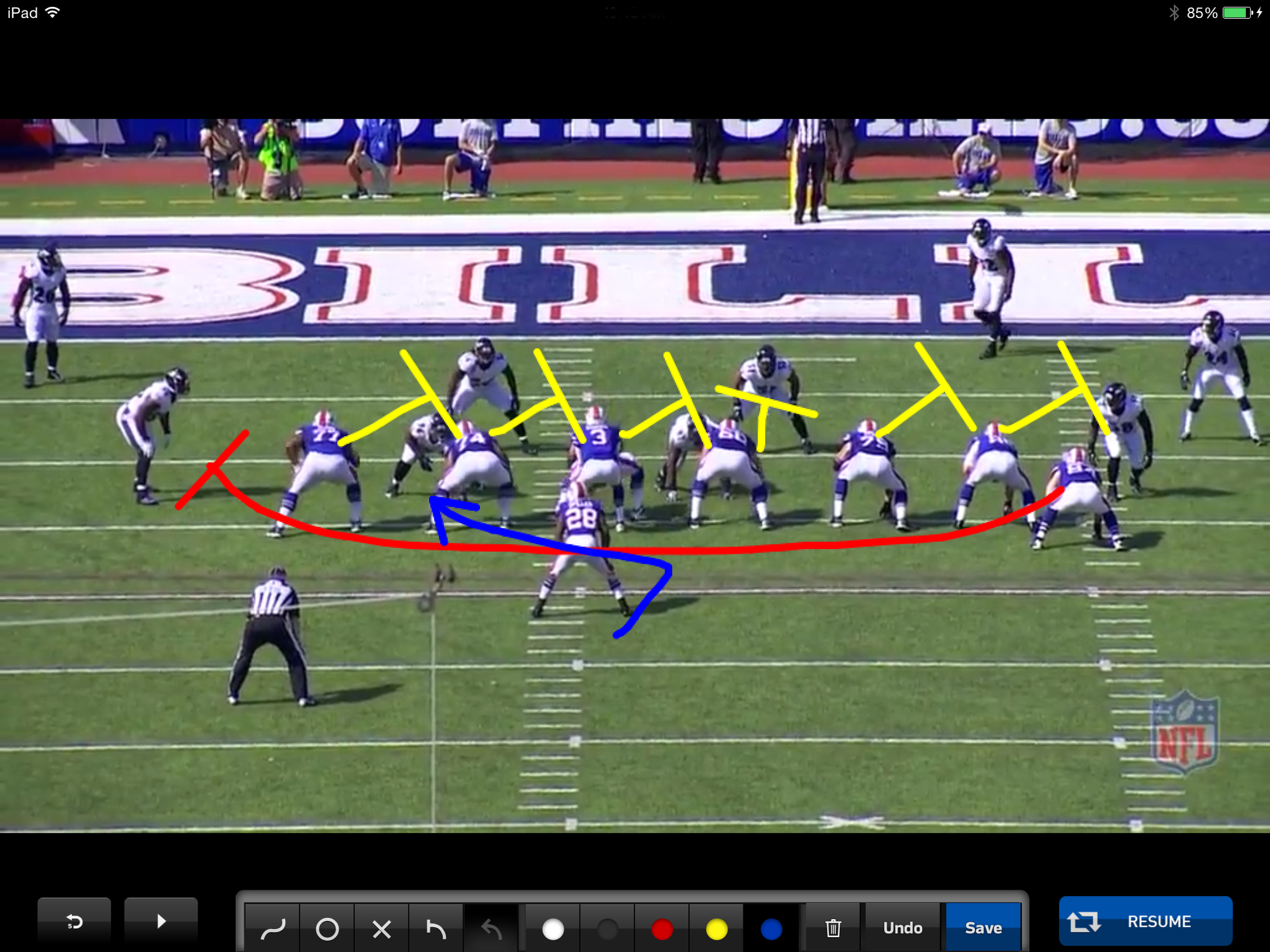 A trap play involves a blocker pulling out of his position, leaving a defender unblocked, and moving to the other side of the line to create a body count advantage. It necessitates a quick burst through the line of scrimmage to escape the unblocked defender, which Spiller is clearly capable of. Ideally, this play is run with a pulling guard, but the Bills did not have guards mobile enough to handle that, so their three trap runs on the day involved Scott Chandler pulling from across the formation, and targeting the C gap (off tackle) instead of the B gap (between tackle and guard).

These were ugly, ugly plays. On one, left guard Colin Brown was so thoroughly dominated at the point of attack that Chandler ran smack into him three yards behind the line of scrimmage. On another, Arthur Jones easily slipped a Pears block for a stuff at the line. This is a running play that is suited to Spiller's skill set, but the Bills abandoned it fairly early because they couldn't execute it.

This was a game in which the Bills were clearly aiming to give Spiller workhorse-level touches. 23 carries in less than three quarters of play is unheard of for him. But as their run-blocking calls became more complicated, their run blocking deteriorated. Quickly. And as fate would have it, Spiller isn't a meat-and-potatoes runner, capable of pushing the pile on bread and butter runs; he's at his best when a team is capable of executing blocking schemes with a bit more movement.

A Bills guard pulled on exactly zero of his runs in this contest. You could count the off-tackle runs on one hand, and there were no sweeps. (There was an end around run, which T.J. Graham turned into a nice chunk of yardage.) Was this a mistake on the team's part, or simply their not being at all comfortable that they could escape mistakes if they attempted those types of plays? There is evidence to support that theory.

A clear point of emphasis for the Bills this offseason, of course, was shoring up the offensive line. Chris Williams is certainly no world-beater as a starting guard, but from a purely athletic standpoint, he is a quantum leap forward from what the Bills had on hand last season. Cyrus Kouandjio should be a much more consistent blocker at right tackle, capable of sustaining blocks longer. They are, at least physically, much more capable of running the plays that you see above, and perhaps a few more less-used options. (And, yes, Spiller will hopefully be healthier.)

When it comes to talking about Spiller and the Bills' rushing attack, a lot of the blame has rhetorically been placed at the feet of play-callers and Spiller himself. Using this game as an example, however, perhaps all parties involved metaphorically had their hands tied a bit. The Bills leaned heavily on the run last season and were productive, even though they weren't particularly consistent blocking it. That, aside from better play from Manuel, is what the Bills need more than anything on offense.