How did Bills quarterback EJ Manuel stack up against his fellow rookie starters (Geno Smith and Mike Glennon) in 2013? Some stats are quite promising, while other key areas are rather troubling.

Three rookie quarterbacks were their team’s primary starters in 2013: Mike Glennon, EJ Manuel, and Geno Smith. In order to put Manuel’s rookie season into context and analyze his strengths and weaknesses, he should first be compared to his fellow classmates. By expanding the incomplete pass classification study to the other two rookie quarterbacks, Manuel’s performance can now be compared to Glennon and Smith’s play in 2013.

Of the three primary starting rookie quarterbacks in 2013, Manuel’s completion percentage on all passes was second-best at 58.8 percent. Adjusting for passes thrown away, passes tipped at the line of scrimmage, and spiked passes, his completion rate was still second to Glennon’s 64 percent, but was a more respectable 60.8 percent. Smith’s adjusted completion rate was a similar 60.7 percent.

Like Glennon and Smith, Manuel’s completion rate varied by target depth. Broken down into five-yard increments, it’s clear that Manuel had a superior completion rate on passes from 5-9 and 15-19 yards past the line of scrimmage. The completion rates by varying pass depths for the three quarterbacks are depicted below. 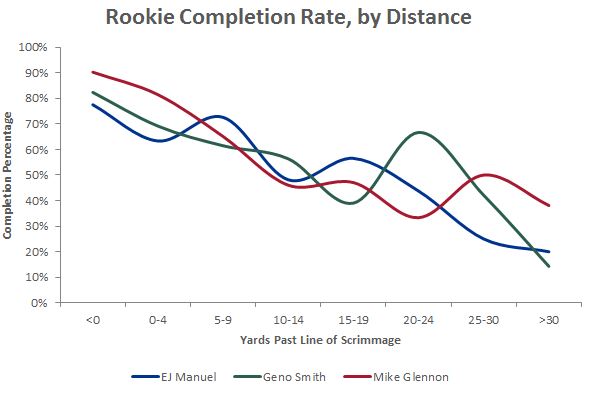 When drops are combined with completions to get an expected completion rate, all three curves obviously shift upwards. (Note: the drops were judged by me watching each pass, and drops are not an official statistic. I tried to be as objective as possible and grade each incomplete pass the same, but the study would be better with multiple viewpoints averaged in some fashion. Any takers?) Glennon’s expected completion curve becomes very smooth and has very little noise once the drops are included, which is somewhat interesting. Manuel’s curve still has a bizarre dip in the 10-14 yard range, however. The expected completion rate curves are below. 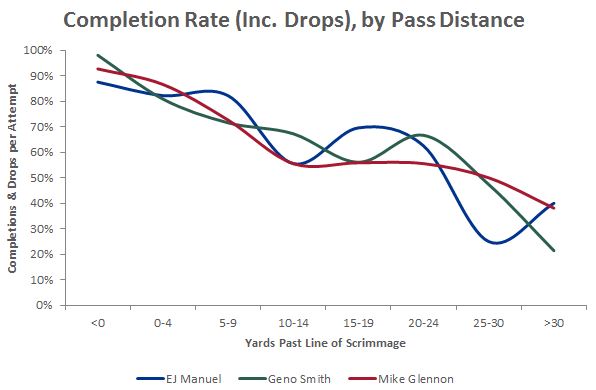 The first takeaway from the expected completion rates is that Manuel boasts the highest overall rate in the class (74 percent). Smith moves up to second-best with 71.7 percent, while Glennon slips to third at 71 percent. The change in order is a result of Manuel and Smith suffering through a similar percentage of drops, while Glennon’s receivers dropped just 6.2 percent of his passes. At this point, it's hard to tell if Glennon was lucky, or if his receivers possessed superior catching skill. That's probably a topic for another post.

Beyond the changes resulting from adjusting the rates for drops, why does Manuel’s rate drop so strangely in the 10-14 yard range? Manuel attempted 27 passes in this depth range, and just 55.6 percent of them were caught or dropped. 16 of those 26 passes were thrown outside the numbers.

Overall, Manuel’s passing rates don’t seem to be too far from the rest of his class. The poorly thrown pass rate is about equal among the three passers, right around 16-18 percent. Maybe the class as a whole was more inaccurate than others. More data is needed. Again, any takers?

Manuel has a low pass defended rate compared to the class, which might be the result of Manuel throwing to open receivers more often. Smith and Glennon, meanwhile, had 8.8 percent and 9.3 percent of their attempts classified as right on target but defended, indicating they were throwing into tight coverage more often. The classification breakdown of all three rookies’ passes is below. 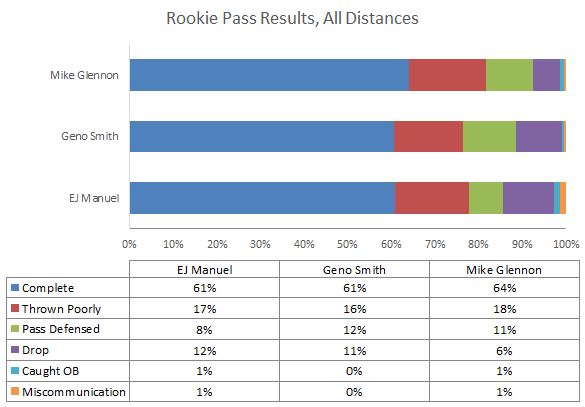 An understatement of Manuel’s play is that he needs to improve on deep passes. His adjusted completion rate (completions and drops per attempt) on passes 20 or more yards down field was the lowest of the class (44.2 percent). Manuel’s problem was that such a high proportion of them (40 percent) were thrown poorly and deemed uncatchable. Meanwhile, Smith and Glennon threw just 25 percent and 22 percent of their passes poorly.

41 percent of Manuel’s passes to the sidelines (at all depths) were thrown poorly. That’s a disturbingly high rate, compared to Glennon’s 26 percent and Smith’s 31 percent. Hopefully, Manuel’s rate is just a function of small sample size (just 37 of his passes were targeted along the sideline), and he will show more promise on these throws in 2014. The distribution of passes to the sidelines for all three passers is below. 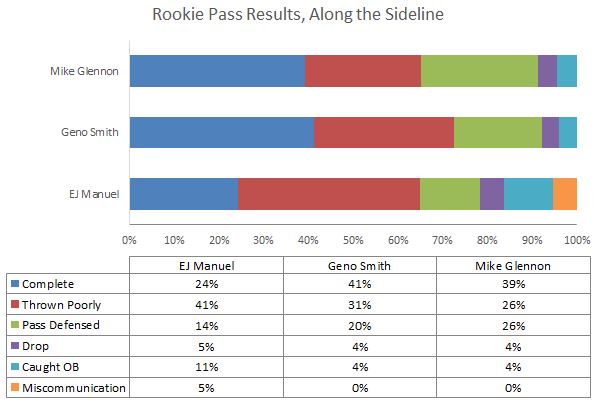 Some of these comparisons are encouraging for Manuel's second professional season with the Bills. His catchable pass rate was highest among his peers, especially when to the middle of the field. If almost 80 percent of his passes short of 20 yards are catchable, then the offense should take a major step forward in 2014.

The sideline passes are concerning. Either Manuel needs to improve his touch on those passes (and study what went wrong), or the offense needs to avoid those throws. The upside is that Manuel didn't force passes like his classmates did in 2013. Aided by scheme, Manuel has shown that he can target open receivers. He just needs to get it to them a little better, and they need to make the catches.