Unsatisfied by a simple recitation of his NFL Combine 40-yard dash time, we set out to further explore the incredible speed of Flash Goodwin.

Some of my friends are a little weird. Case in point: I exchanged the following series of text messages with a friend that doubles as a Buffalo Bills fan over the weekend.

I'm still not exactly certain what, exactly, the amigo was looking for by way of a response to that question, but hey: it's the offseason. Why not explore the apparently unanswerable question of how fast Marquise Goodwin is?

First, watch this video. Watch it a couple dozen times, in fact; it's a great video. It's also the play we're going to be talking about - a 59-yard touchdown reception from third-string quarterback Jeff Tuel in a Week 9 loss to Kansas City last season - and, perhaps, extrapolating Goodwin's speed from. We'll start with the route combination: 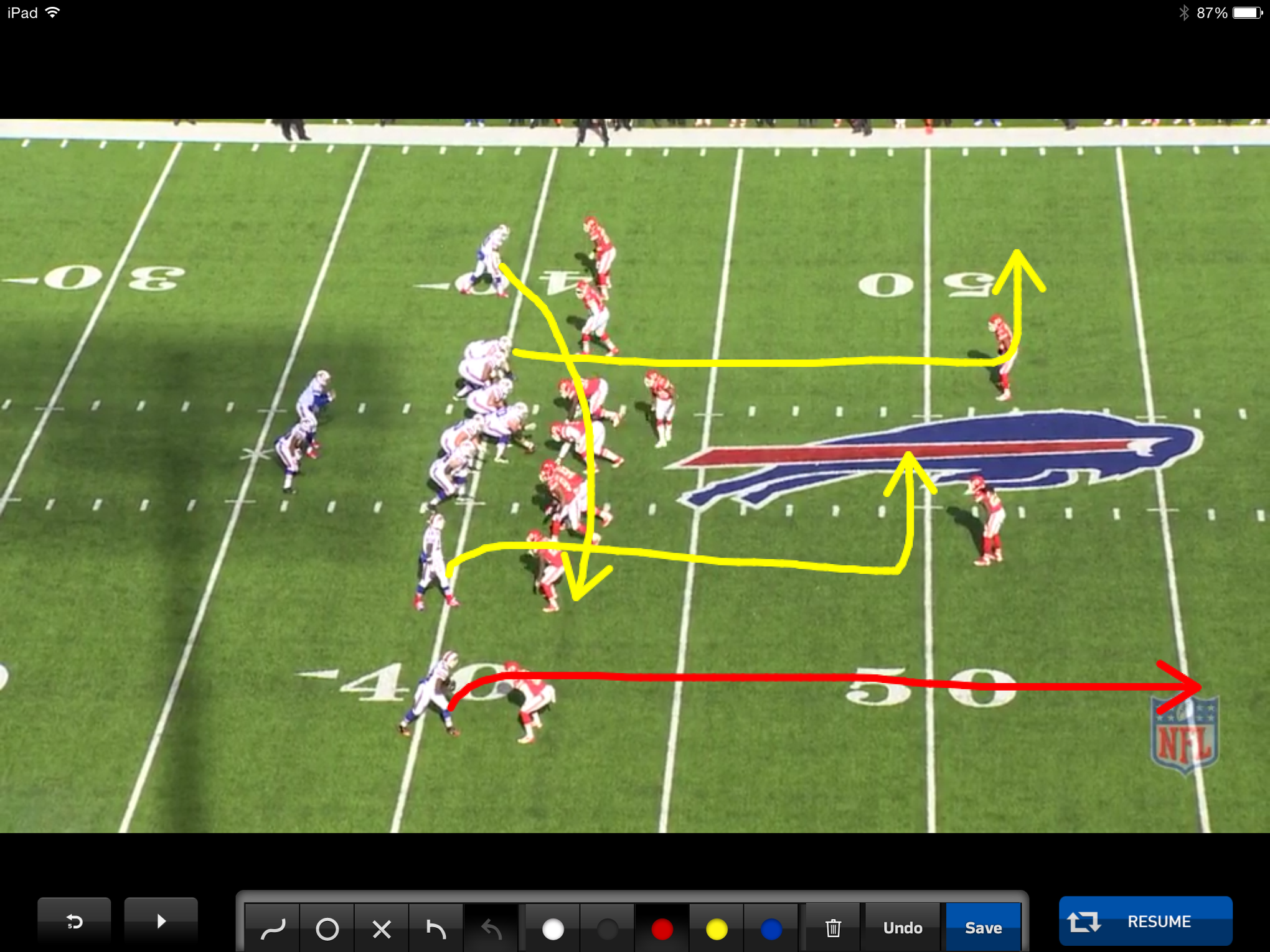 The prettiest play of the Bills' 2013 season happened on a 3rd & 8 in the first half. The Bills dialed up a route combination in which Robert Woods (top) drags across the formation, Scott Chandler (off left tackle) and Stevie Johnson (slot right) run left-breaking patterns at the sticks, and Goodwin (bottom) is simply running a fly pattern up the numbers. 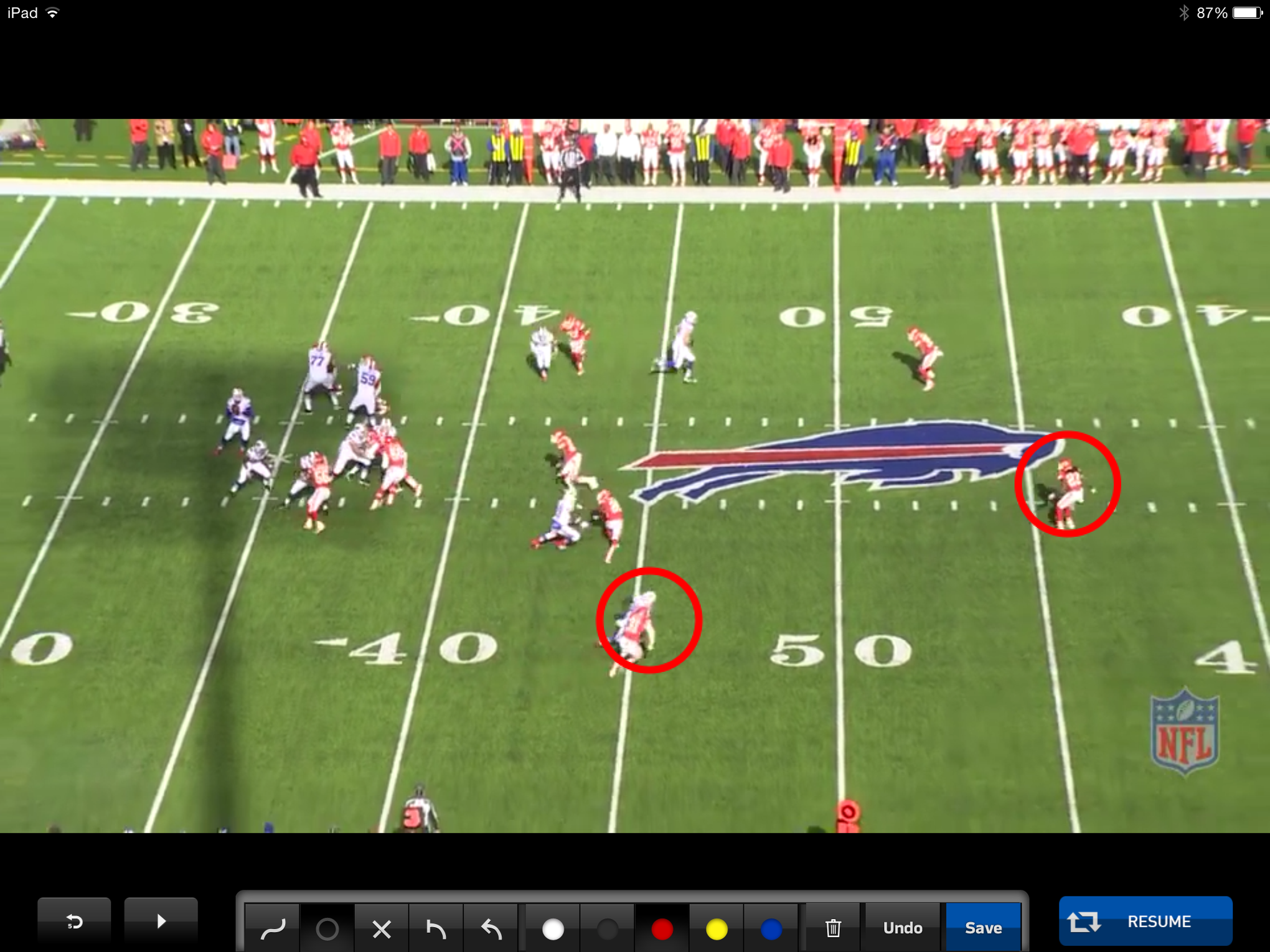 Kansas City is sending five, and the Bills have the pass rush blocked quite well. The above still comes as Tuel hits the back of his three-step drop (out of the shotgun). Circled in red: Goodwin getting a clean release working against cornerback Marcus Cooper on the left, and now-Houston safety Kendrick Lewis, much to the delight of our friends at Arrowhead Pride, providing coverage over the top on the right. 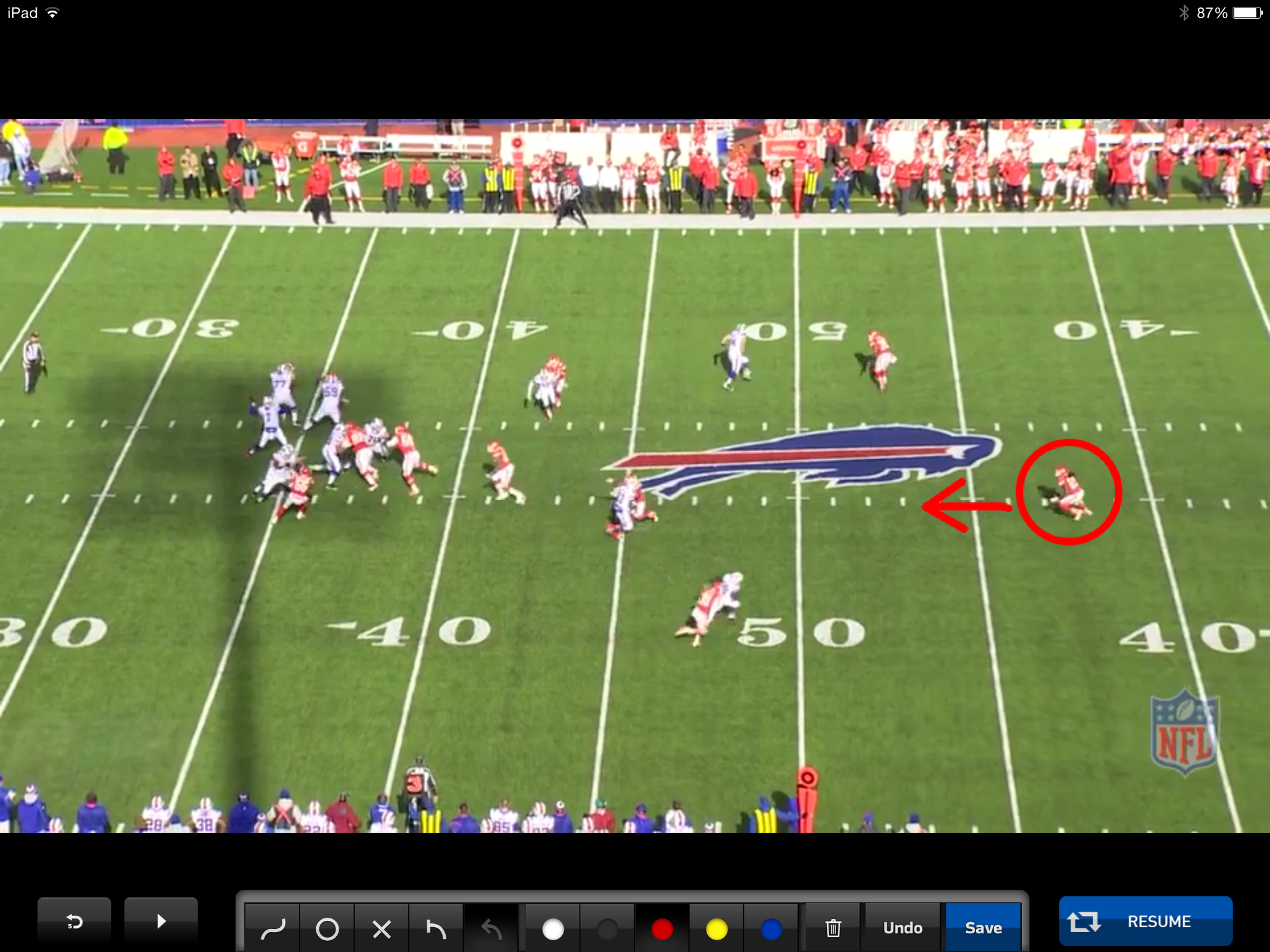 As Tuel cocks to throw, Lewis - because it's Jeff Tuel, and Jeff Tuel is an undrafted rookie, and surely the Bills are just trying to get a first down and play conservatively - takes one false step towards the sticks. Goodwin has now torched him. He'll be open deep. The throw just has to be there. 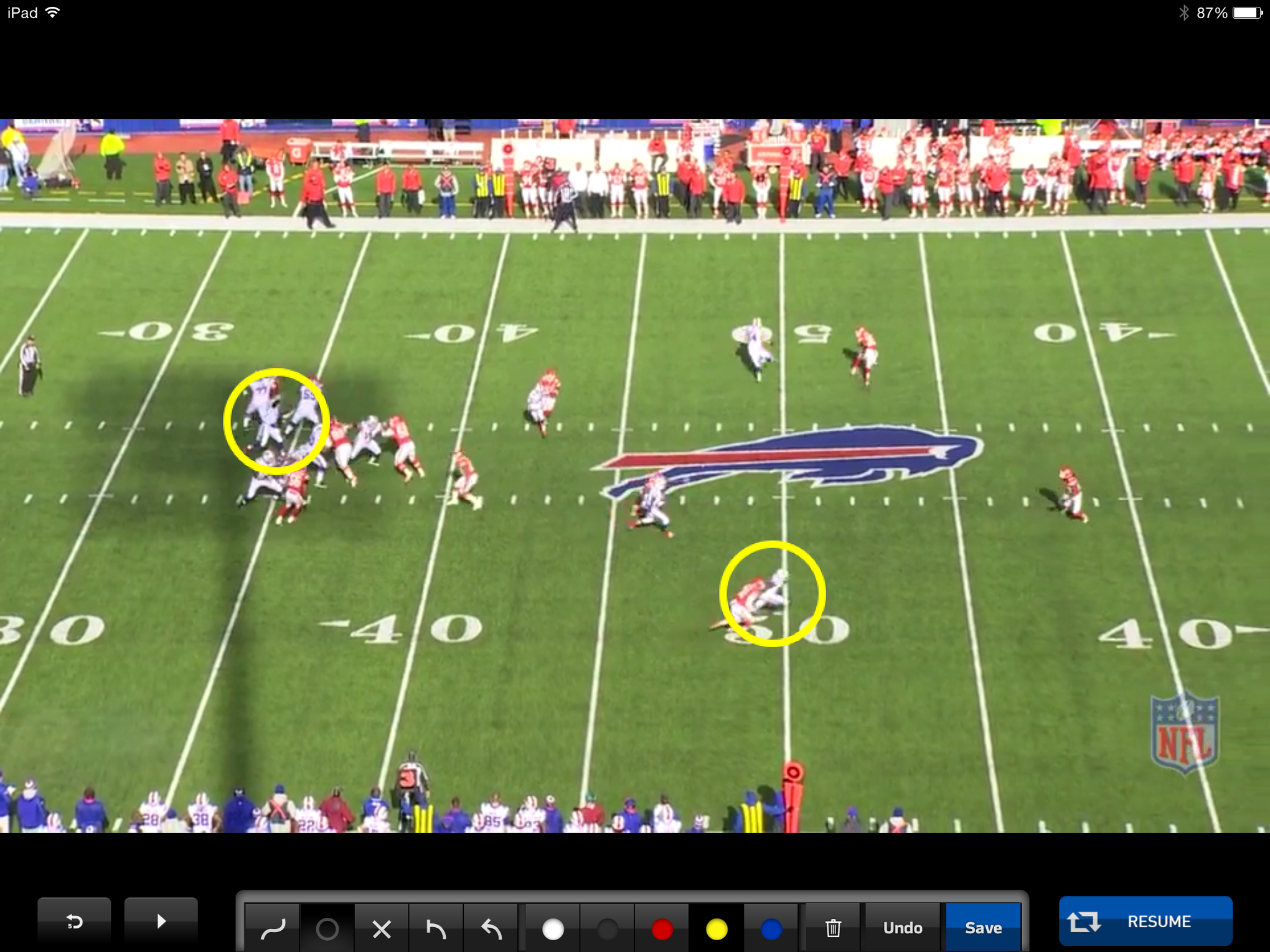 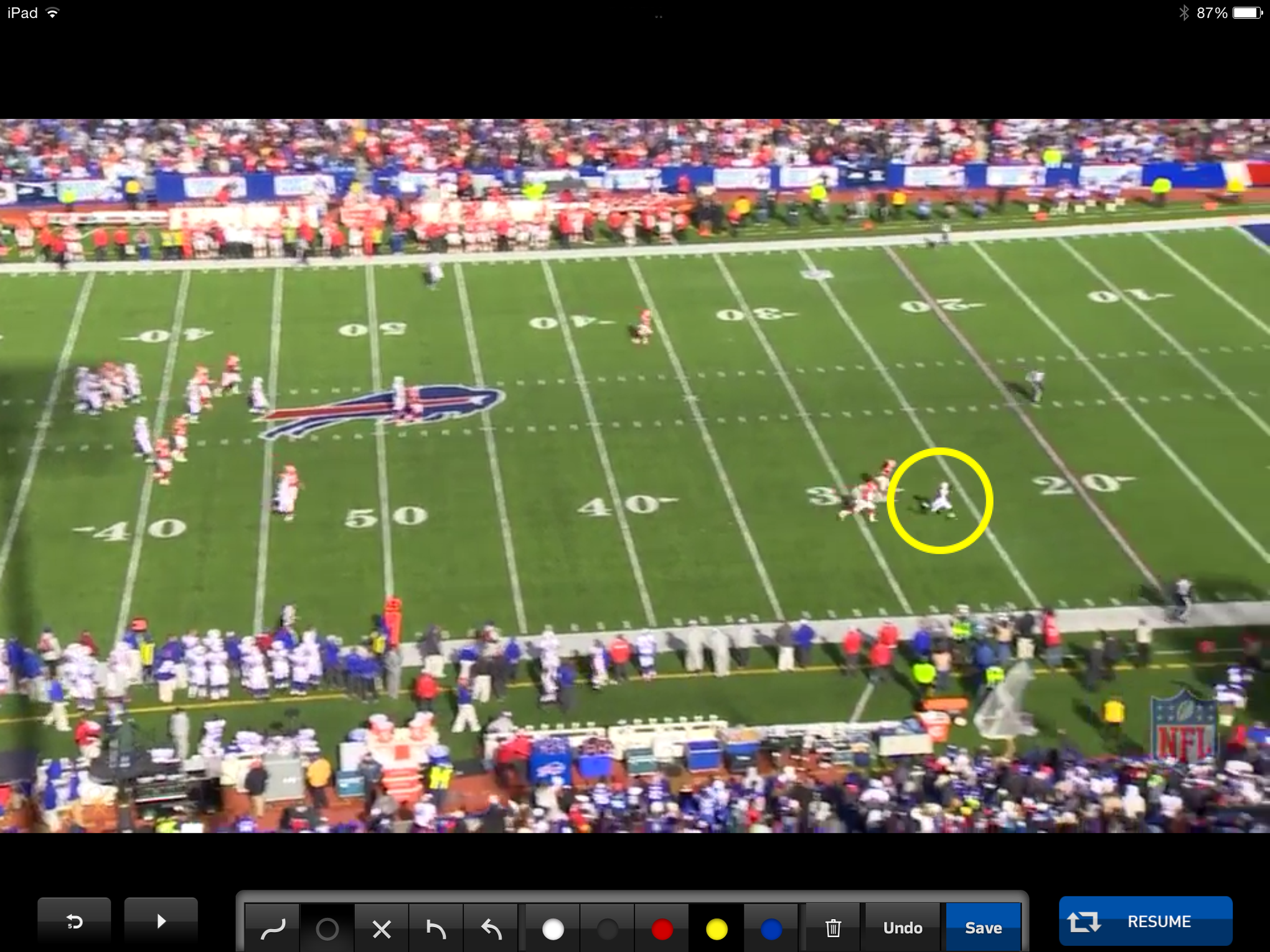 This was the fun part, I guess. From the time the ball left Tuel's hands, when Goodwin was a hair shy of midfield, to the time the pass hit Goodwin in the hands, the receiver had covered 23 yards. I pulled out the stopwatch function on my phone and timed how long the ball was in the air; a few dozen attempts at said timing led to a slew of times between 2.38 and 2.43 seconds.

By my hand, then, Goodwin was covering between 9.47 and 9.67 yards per second. That's a 40-yard dash equivalent range of 4.14 to 4.23 seconds. That's off a clean release, past the initial point of acceleration, when Goodwin is in his top gear. It also does not account for Goodwin's drifting from inside the numbers to at least two yards outside of them, meaning that he actually covered more than 23 yards; I'll let the mathematically religious of this fine community calculate the hypotenuse and run further calculations from there.

The short answer to the original question: Marquise Goodwin is stupid fast.