Care to guess who led the Bills in receptions of 20 or more yards last season? A hint: he doesn't play wide receiver.

One of the biggest reasons that the Buffalo Bills made major changes to their receiving corps this offseason: a need for (many) more big plays out of the passing game. Scott Chandler led the Bills with 10 catches of 20 or more yards in 2013, an alarming fact made all the more so by his finishing tied for 49th in the NFL in that category.

That process starts in the slot, where second-year pro Robert Woods will replace veteran Stevie Johnson, who was traded to the San Francisco 49ers during the 2014 NFL Draft. Though Johnson did manage to haul in 36 passes of 20 or more yards from 2010-2012, that number dropped precipitously to six in his first (and only) year in the Doug Marrone and Nathaniel Hackett offense. Woods, by comparison, finished his rookie season with nine such receptions, averaging a 20-yard or more catch every 9.4 targets to Johnson's 16.8.

Johnson was really the lone veteran of Buffalo's receiving group last season; that title now falls to Mike Williams, acquired in a pre-draft trade with the Tampa Bay Buccaneers. He played in just six games in 2013 and had just one reception of over 20 yards, but between 2010 and 2012 he had 44 such receptions, finishing in the Top 15 in the NFL in that category twice (17 in 2010, 18 in 2012).

In his heyday with the Bucs, Williams averaged a 20-yard or more reception once every 8.6 targets. By comparison, Johnson averaged one every 11.8 targets in the same time frame. Whether you're comparing Johnson to Williams in general, or Johnson to Woods in the slot within the context of the team's current scheme, the Bills are theoretically more explosive.

Woods saw limited time in the slot for the Bills in 2013, mostly when Johnson was out of the lineup. These examples from the team's Week 6, 27-24 overtime loss to the Cincinnati Bengals showcase two downfield opportunities involving Woods lined up in the slot. 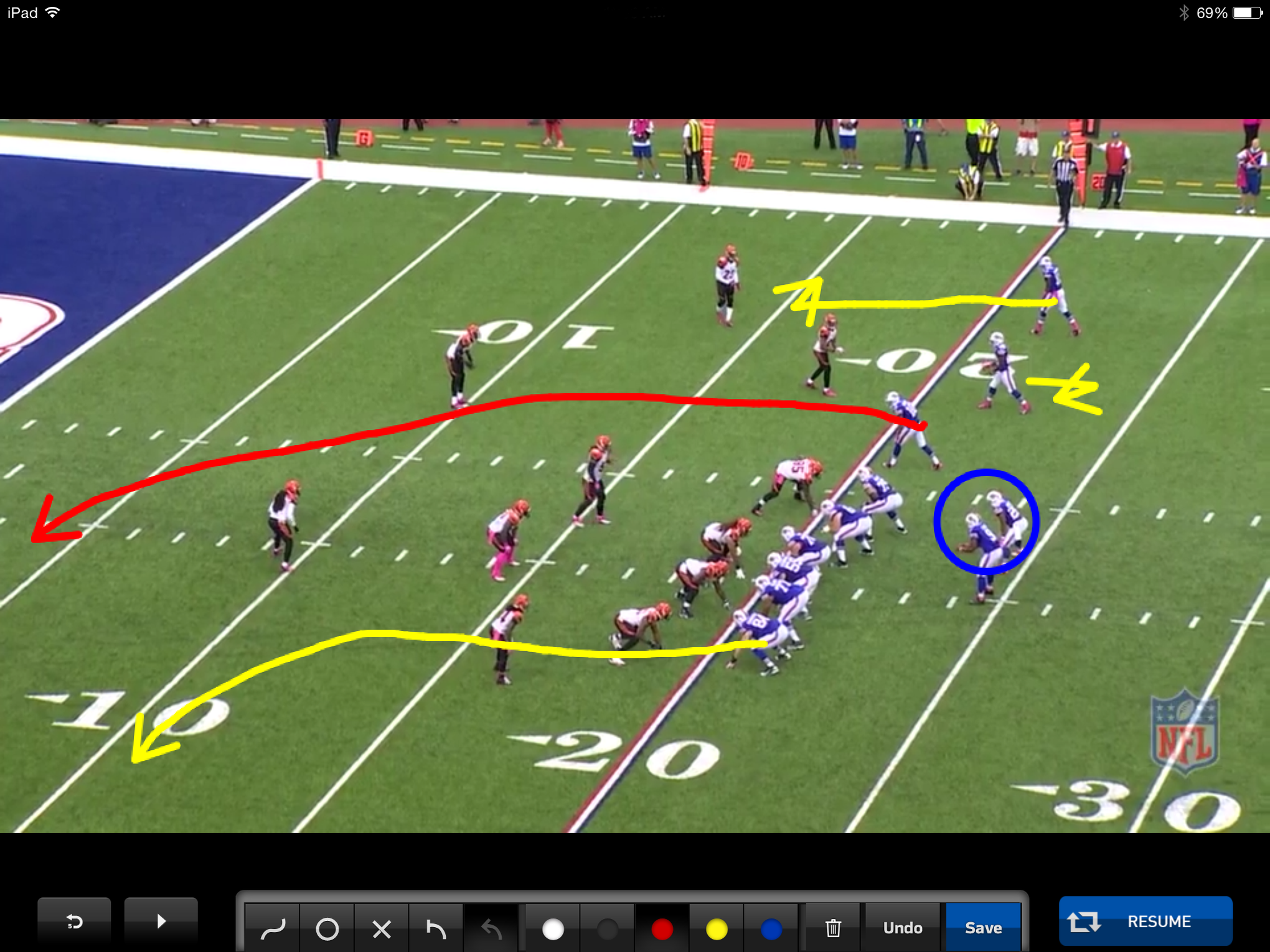 Lined up on the Bengals' 20-yard line, the Bills have all three of their receivers on the right side of the formation. Circled in blue, Thad Lewis will execute a play fake involving running back Tashard Choice. Woods is lined up tight inside, and along with Chandler (bottom of the screen), they'll be running routes that stretch the Bengals' coverage horizontally as well as vertically, and give Lewis two layers to attack. The remaining two receivers are available on a bubble screen, which Hackett likes to build into his read-option fakes as discussed here. 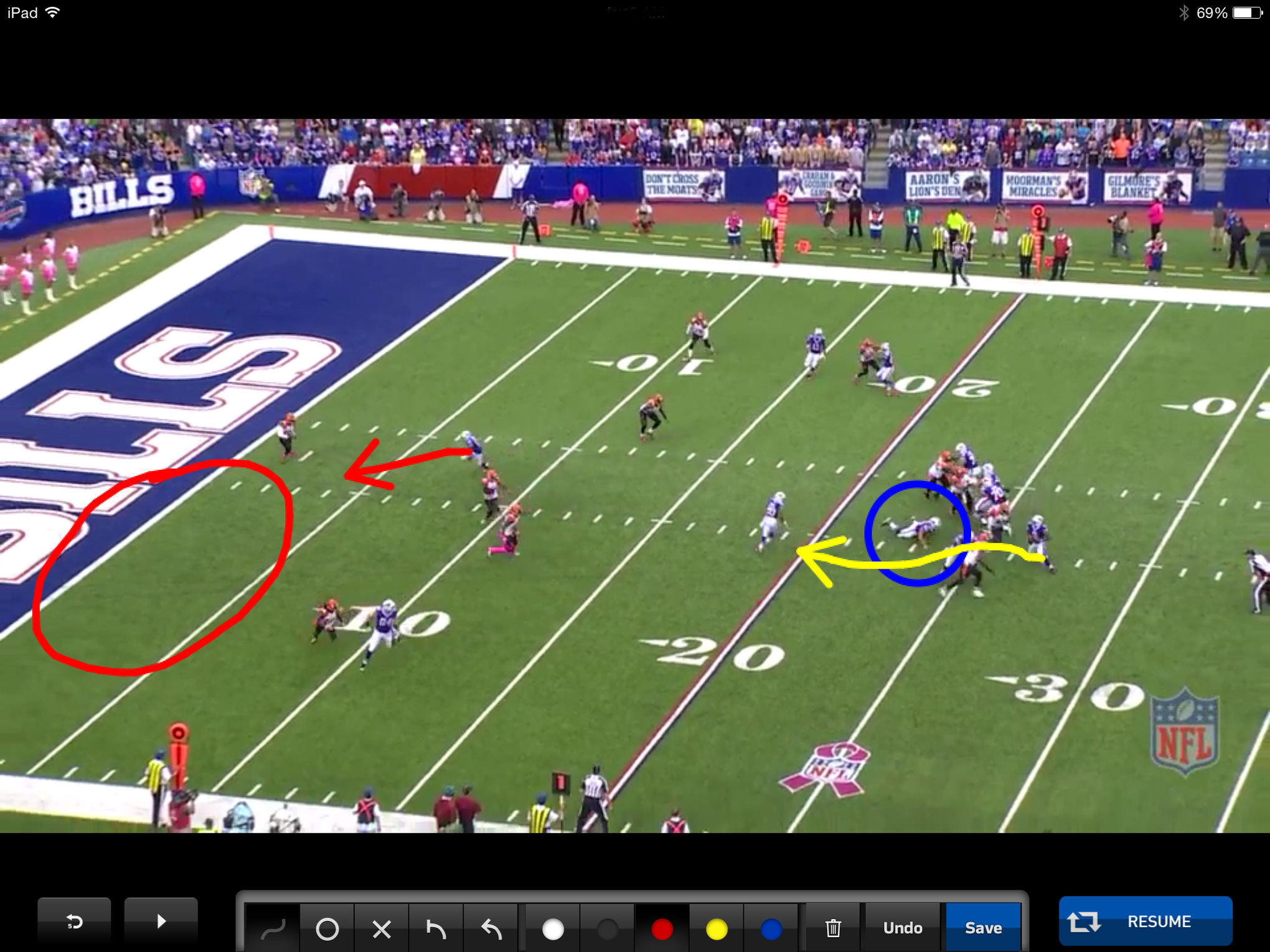 Left guard Doug Legursky is beaten like a drum, forcing Lewis to abandon the pass and scramble for four yards. Cleaner protection gives Woods an excellent chance at a 20-yard touchdown reception, as he's running into fairly open territory with good leverage. Take note, also, of how the Bengals' secondary has been spread out considerably from where they were aligned pre-snap.

Later in the fourth quarter, with the Bills trailing 24-10 and facing a fourth down deep in Bengals territory, the Bills dial up a four-verticals play, knowing that Cincinnati is likely going to blitz. 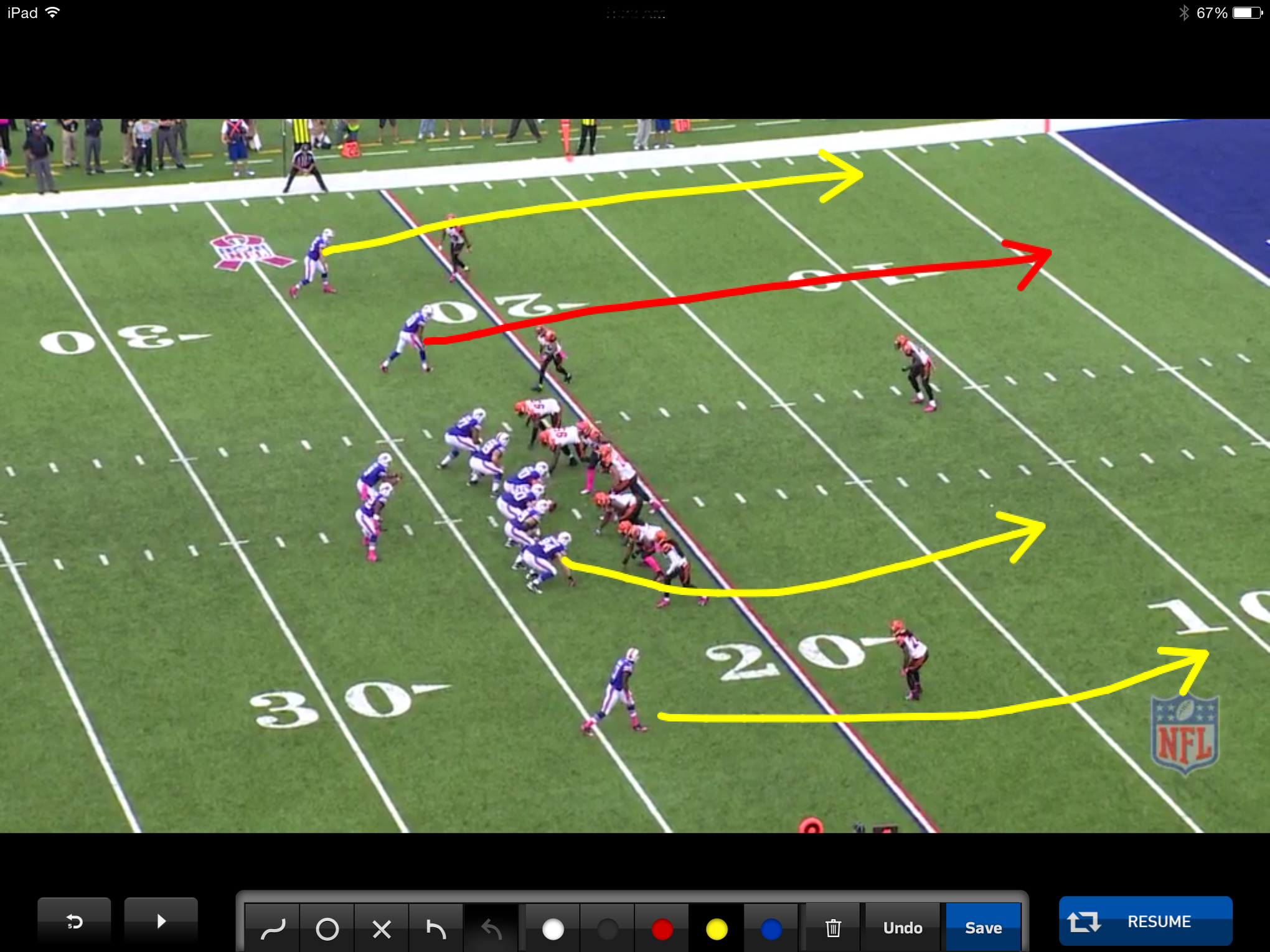 In the middle of the formation, you can see two Bengals defenders showing blitz. Lewis sees a single high safety and knows the Bengals will be in either Cover 1 or Cover 3, making the seams his primary reads. Lewis consistently threw the four-verticals play well when throwing up the right seam in his five games last season. 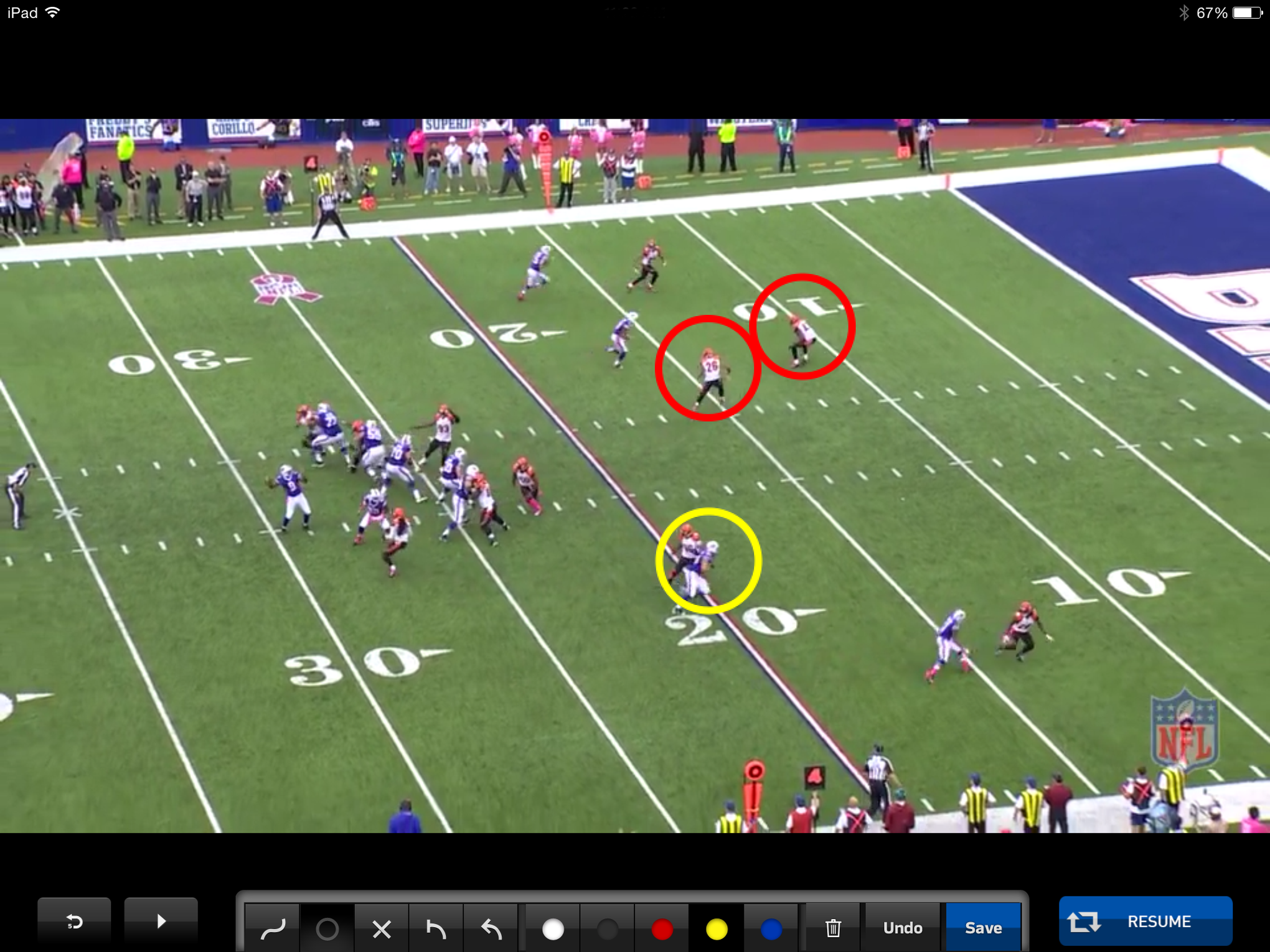 Taylor Mays, one of the two Bengals lined up over center, drops off into trail coverage underneath Woods, who is clearly the primary target of Cincinnati's called coverage. The added attention on Woods opens the door for Chandler, who is effectively uncovered in hauling in a 23-yard touchdown reception to cut the lead to 24-17. (The Bills later tied it up and sent it to overtime on a 40-yard scoring play, too.)

Johnson was able to affect coverages out of the slot, as well; he was proven enough that especially early in the season, he was the primary focus of opposing coverages. Woods won't command that much attention out of the same role with bigger-name players on the roster, but he offers much more upside in terms of picking up chunk yardage than Johnson would have, too.

It goes without saying that Marquise Goodwin was the Bills' most efficient big-play receiver last season; the then-rookie had five big plays despite playing just 313 snaps, averaging a gain of 20 yards every 6.4 targets. Then, of course, there is rookie wide receiver Sammy Watkins, who tallied 48 receptions of 20 or more yards in his three years at Clemson, and comes into the NFL as a big-play threat from any point on the field. (For those of you poised to yell if this article doesn't mention T.J. Graham: he had six 20-plus yard receptions last season, hauling in one every 9.5 targets. He is not thrown to much compared to his higher-profile teammates.)

Doug Farrar of Sports Illustrated cited an interesting Pro Football Focus statistic in a recent breakdown of Watkins' game: more than half of the routes that Bills receivers ran in 2013 were go routes (31.1 percent) or hitches (24.5 percent). Not only do the Bills now have personnel better equipped to diversify their route tree, if they feel more comfortable sticking with what they know, they also have personnel better equipped to provide more big plays within that structure.