How Dustin Hopkins can make the Bills' 53-man roster

Dustin Hopkins probably isn't going to make the Bills as anything more than a kickoff specialist. What does he need to do to succeed?

Share All sharing options for: How Dustin Hopkins can make the Bills' 53-man roster

2013 sixth-round draft pick Dustin Hopkins’ only shot to make the Buffalo Bills roster this season is probably as a kickoff specialist, barring an injury to Dan Carpenter. Apparently, any hope of a field goal kicker competition ended early in camp.

So much for a kicking competition. All 8 field goal attempts today were taken by Dan Carpenter. He was 8/8 #Bills

Sunday night's preseason opener against the New York Giants will be the first of (maybe) five auditions for Hopkins to prove he is worth the roster spot. How good does he need to be?

Since kickoffs were moved up to the 35-yard line in the 2011 season, kickers have forced a touchback on 46.5 percent of their kickoffs (after removing onside kicks). That stat drops to 45.6 percent when ignoring games played in Denver, where 68.5 percent of kickoffs go for a touchback.

That’s fine (and not too interesting), but how deep does Hopkins need to kick the ball in order to induce a touchback?

71.6 percent of the play by play data (found here, except the 2013 data, which I had to compile from Pro-Football-Reference and NFLGSIS) includes the kickoff distance. Using that data, the number of touchbacks from the various kickoff depths are found below.

There are a few issues, however. The data is highly subjective, since the official game scorers estimate the kickoff depth in real time. Also, there are an undue amount of touchbacks that went exactly 65 yards (just enough distance to get to the goal line). Lastly, there are no notes about whether the kick rolled into the end zone or carried the distance on the fly.

Another oddity was that three touchbacks went just 64 yards, not enough to carry into the end zone.

Then I determined which model was the better fit by testing the 2008-2010 data against the two models. (I chose to do that over a basic r-squared values comparison for this reason, and because I don’t care about correlation; I already know there’s a strong relationship already.) 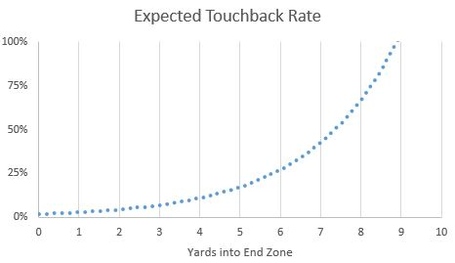 Based on the model (which I admit is flawed due to inaccurate data), Hopkins would need to consistently kick the ball more than seven yards into the end zone to consistently force a touchback. Does he have that big of a leg?

Hopefully, the Bills can score enough this preseason in order to give him plenty of chances to show whether or not he can consistently create touchbacks. Five preseason games should certainly be enough of a tryout.