How did the Buffalo Bills utilize Marquise Goodwin in 2013?

Marquise Goodwin is one of the more specialized weapons in Nathaniel Hackett's offense. How did the team use him in 2013?

Share All sharing options for: How did the Buffalo Bills utilize Marquise Goodwin in 2013?

Marquise Goodwin participated in 43.8 percent of Buffalo Bills passing plays (by my count) in which he played last season. In that limited playing time, Goodwin caught 17 passes for 283 yards and three touchdowns. His yards per reception average led the 2013 Bills, and ranked No. 18 among receivers and tight ends with at least ten receptions.

According to Pro Football Focus, Goodwin was among the league leaders in yards per route run on go routes:

I’m not sure how PFF classifies routes (everyone does it a little differently), but my process was relatively simple: take note of the break direction and distance past the line of scrimmage, and if there was none (double-moves and mostly straight lines were counted as no break), then it was a "go" route. The other routes I charted are pretty self-explanatory (if not, let me know!) and I used the same formulation as the Scott Chandler study done a couple months ago.

I also noted where Goodwin was when the quarterback released the ball or was sacked. Here’s where he was on his 181 routes. 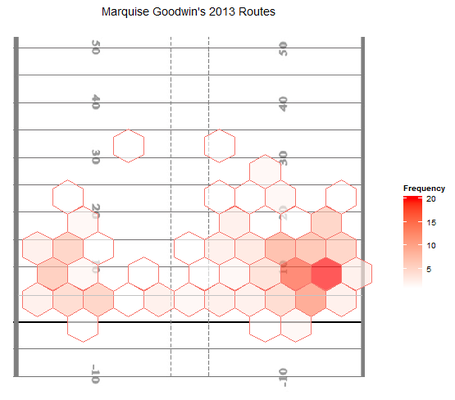 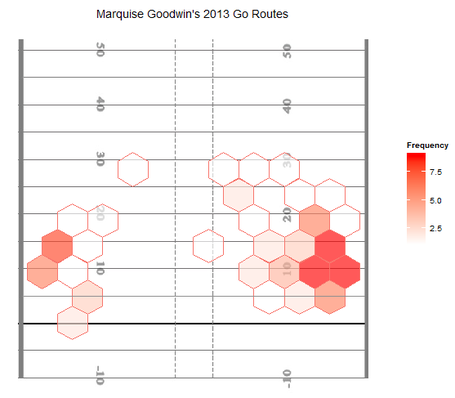 Speaking of targets, here are the points (by my best estimation) where Goodwin was targeted on all routes. 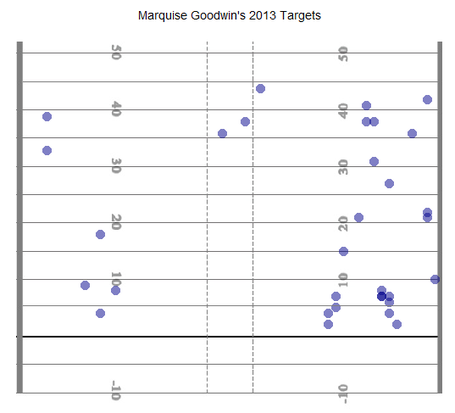 Because there’s some ambiguity (especially horizontally because there aren’t any yard markers from sideline to sideline), I prefer the binned approach. It also accounts for targets in the nearby locations, showing a greater trend than just individual points. Here is the binned version of Goodwin’s targeted locations. 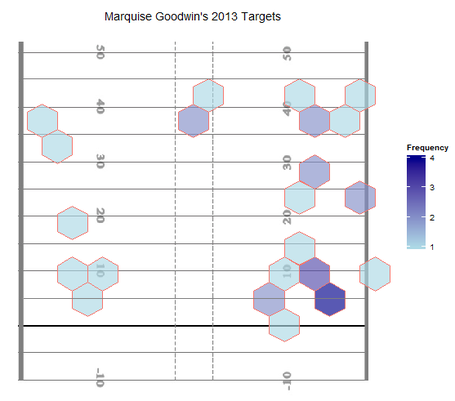 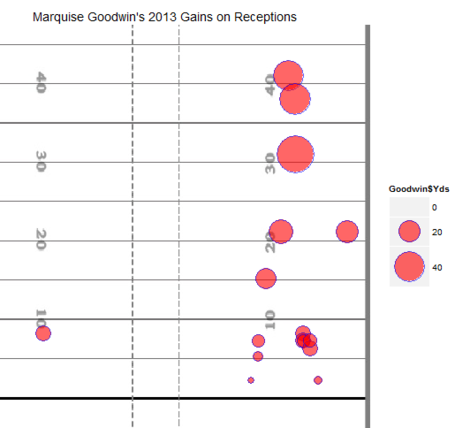 One thing to note here is that the gains correlate very closely with the target depth. Aside from his touchdown against Kansas City, Goodwin didn't have any big gains after the catch (the touchdown against the Jets was caught about five yards from the goal line). It's not a knock on him or his passers yet, but we will get a better idea once the same size increases.

Goodwin is a lethal weapon on the outside. His speed is both a weapon and a decoy. He will run by you as you’re standing still, or he’ll look as if he’s going to burn you deep and stop short on a curl. Here are his four most common routes run in 2013, and where he was when the ball was thrown. 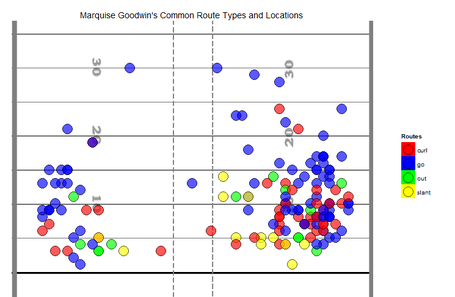 Goodwin’s role will be interesting to monitor as the Bills continue through the preseason. He possesses some of the best speed in the entire league, but isn’t a one-dimensional burner receiver. Hopefully he can see more than the 32 targets he saw in 2013 this upcoming season.