Buffalo Bills red zone offense: is it time to panic yet?

The Bills have had issues in the red zone this preseason (and in 2013), but is it still too early to panic?

Share All sharing options for: Buffalo Bills red zone offense: is it time to panic yet?

The Buffalo Bills’ first team offense has yet to score a touchdown in 2014. They’ve played three preseason games so far, but haven’t been able to push the ball into the end zone. Should we be worried?

By my count, the first team offense has had 26 plays in which they started fewer than 30 yards away from the end zone. Since 2009, all NFL teams have played 34,376 snaps from inside that distance. 4,772 of those plays (13.9 percent) ended in touchdowns. Here’s the breakdown in ten-yard bins.

The overall probability is then the weighted average of the 26 plays and the respective chances of not scoring a touchdown. The breakdown is below.

It’s unlikely that the Bills wouldn’t have scored a touchdown yet, especially inside the ten, but is it worth worrying about yet?

In 2013, the Bills scored on 91 percent of their drives that got within 30 yards of the end zone. That’s third-best in the entire league. However, they scored a touchdown on just 41 percent of those drives, which ranked No. 27 in the NFL.

The 2013 Bills had the 20th-most plays inside their opponent's 30-yard line (209 plays). Their touchdown rate on those plays was 11 percent, ranking No. 29. They also ran the second-most of all teams (63 percent of the time). Buffalo’s passing plays had the fourth-lowest touchdown rate in the NFL.

EJ Manuel threw the ball on 38 of Buffalo’s 78 pass plays (including sacks) inside the 30-yard line. The targeted zones on either side of the field are incredibly different. 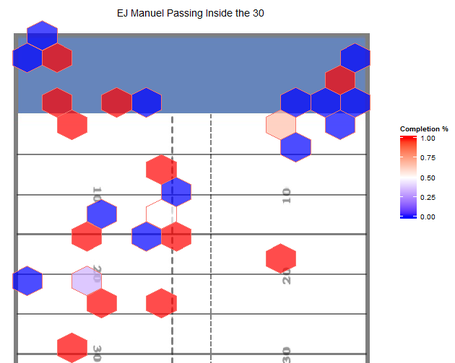 Maybe passes along the sideline are to blame. Here’s the same data from the line of scrimmage. 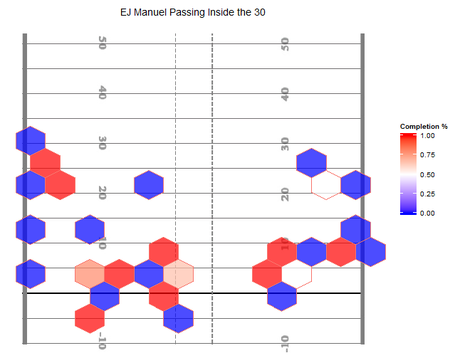 Manuel has probably made strides since his interrupted and shortened rookie season. Hopefully his improvement, plus the new receiving corps, can lead to a better touchdown rate in scoring range. But there’s one thing for sure: it’s way too early to panic about the first team not scoring a touchdown in the preseason so far.