All three of Buffalo's drafted rookie linemen played plenty of snaps during the team's first preseason game. How did they look in their first NFL action?

Share All sharing options for: Seantrel Henderson, Cyril Richardson, and Cyrus Kouandjio in Bills vs. Giants

One of the questions being asked following an underwhelming first preseason performance by the Buffalo Bills was if the offensive line had the right pieces to block in the running game and keep EJ Manuel protected long enough to find his targets. The Bills selected three offensive linemen in the 2014 NFL Draft, and many analysts thought that one or more of those linemen could conceivably start this year. True to form, each player has taken snaps with the first team at one point during offseason workouts. How did they look during their first live game action?

Easily the most talked-about rookie in Sunday's game was seventh-round pick Seantrel Henderson. Starting at left tackle in the place of Cordy Glenn, he played most of his snaps opposite vaunted pass rusher Jason Pierre-Paul. For the most part, he turned in a seriously impressive performance. Let's take a look at what made him so effective, as well as areas he can improve on. 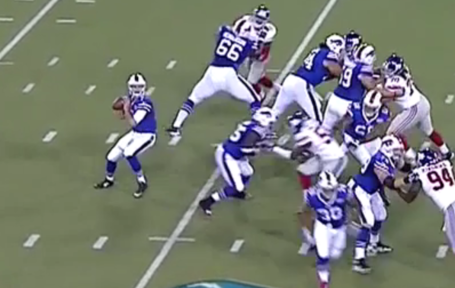 Henderson is a big guy. When he steps with a wide base and bends his knees, it makes a huge wall in front of the defender. This guy never had a chance. 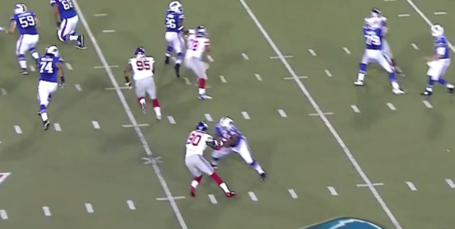 When Henderson gets low and anchors himself, he can generate great power. Here he's the backside blocker on a screen play, at the bottom middle of this image. On this play, he effectively kept JPP away from the runner until the play was ending. 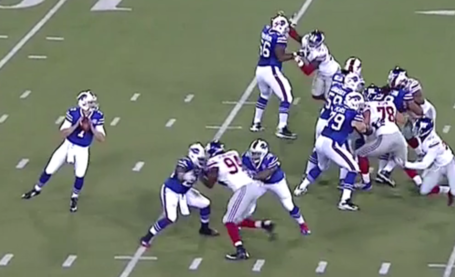 Here's an example of what not to do. Henderson, at the top of your screen, is basically standing straight up. The defender is able to easily rip past him and pressure the quarterback. 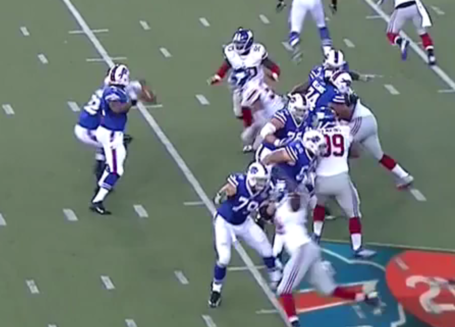 One more bad play, in which Manuel's pass was batted down by JPP. Henderson is at the top right of the string of offensive linemen in this picture. This was plainly a mental mistake on his part, allowing two guys past him and ending up with no one to block himself.

Overall, Henderson's performance was very encouraging. He showed a lot of physical ability and didn't seem to be overwhelmed playing as the first string left tackle. In fact, after the first quarter, I was content to stop watching him altogether as if he was any other good starter who just shows up and plays well. The trick will be if he can be consistent in playing like that week to week. There will be lots of adjusting as he continues playing.

The next lineman to make his way onto the field was fifth-round pick Cyril Richardson, who took some snaps with the starting offensive line in rotation with Kraig Urbik. Overall, I was pretty satisfied with his play. He made some mistakes, but looked very solid out there, and definitely beat my expectations coming from his college tape and the camp reports I'd heard. Let's take a look. 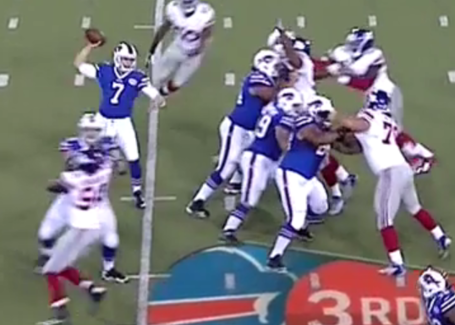 The first word that comes to mind with Richardson is "stout." He is strong at the point of attack, and anchors very well. He's the rightmost lineman in the group of three above, and held up nicely to give Jeff Tuel a good pocket to work from. 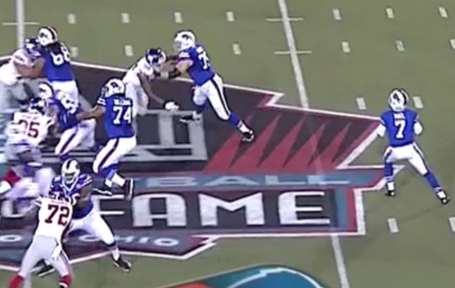 What surprised me a little in watching Richardson work was how quickly he got up to the second level. Here he has already moved up to and sealed his opponent in the top left corner of the screen, while Doug Legursky is still trying to get there and provide assistance from below. 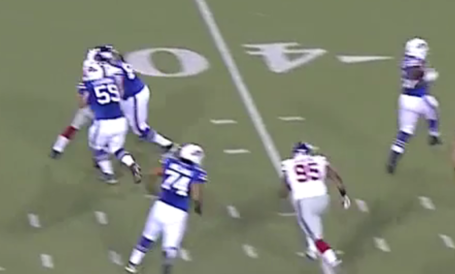 Even on a screen play Richardson was mobile, moving right with Legursky to get in position to block out the defender for Anthony Dixon. Except...

... neither player blocked him. Free defender, free tackle. I guess that's why it's the preseason. 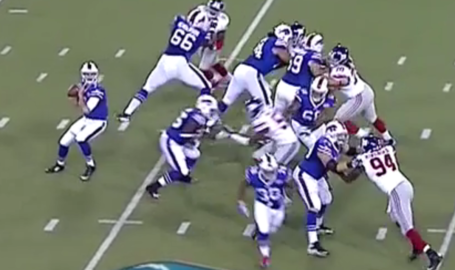 Another area that will improve with practice: identifying who he has to block. In this play, Richardson initially moved to help Legursky on a combination block. Unfortunately, a linebacker blitzed through his gap right after. Luckily, the running back picked up the blitz, but on tape you can see Richardson turn his head and body and quickly try to stop the linebacker, which implies to me he probably should have had that guy.

Overall, there were good signs coming out of Richardson's first game. He showed off that great core strength, and the mobility didn't seem to be as big of an issue. He's a work in progress, but I like what I'm seeing so far. We'll have to watch to see if he makes a stronger claim for a starting spot in the future.

The second-round pick ended up being everyone's favorite whipping boy after the first game, and to a certain extent he deserved it, coming off a bunch of poor plays against second and third stringers. Let's begin with a reminder that Kouandjio is barely 21 years old and came in to the NFL with a lot of technical improvement needed, in addition to playing on the opposite side of the line for the first time in his life. People should be patient with Kouandjio, because he has the tools; he just needs to be taught how to use them. 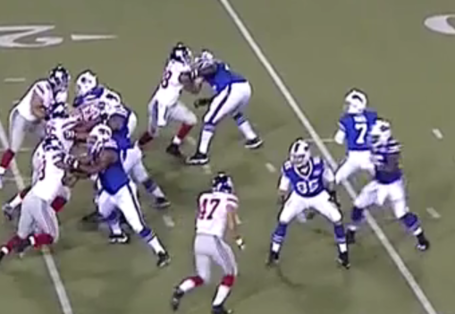 In Kouandjio's case, let's start with the bad. Waist bending. Kouandjio leaned forward a few times during the game, and the Giants' defensive end (I believe it was usually Damontre Moore) abused him for it. The above picture was Kouandjio's first snap, and it was a sack allowed. 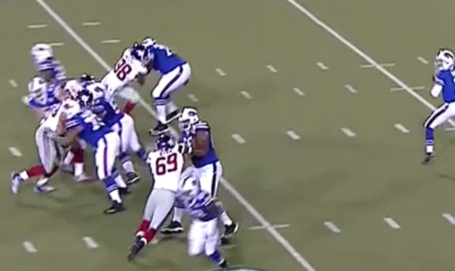 Same issue, different play shortly after the first. Kouandjio comes off the snap, lunges at the end, and the end pulls right around him for easy pressure. Remember the great Henderson stance from above? Here Kouandjio doesn't have a wide base, and his weight is in front of him, not above his feet. He's not balanced and can't generate any force to push the defender back. 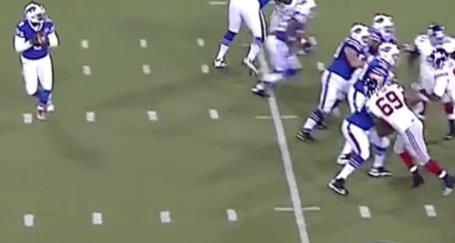 Now seen in another quarter, another defender swimming past a leaning Kouandjio. This is an obvious area of improvement for the guy. 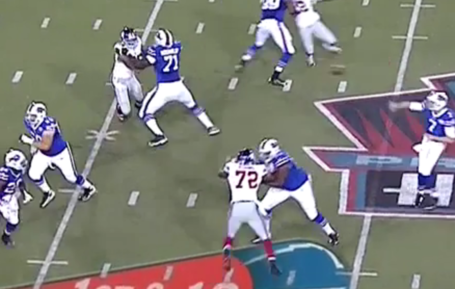 I told you he has tools to work with though! A much better effort from Kouandjio, squaring up the defender and generating force from his lower body. This was after he got initially jarred by the defender. He re-anchored and held up well as the screen pass was in progress. 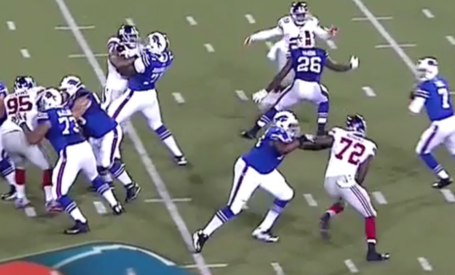 Again with strong re-anchoring. That's my favorite part about Kouandjio, that even when he gets beat initially, he has the strength to drive his legs down and stop the defender's progress. You don't have to worry about him getting walked back to the quarterback. 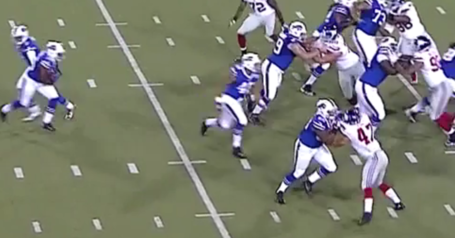 As the game went on, Kouandjio gradually got better (although he was also playing against progressively worse players). I also think he got more effective once he could do some straightforward run blocking. Here he is under a Giant, driving him downfield to open a hole for Bryce Brown's big run.

Kouandjio was definitely the most up and down player of the three rookies profiled here. When he was bad, he was really bad. When he was good (which admittedly didn't happen often), he looked like the borderline first-round talent scouts were talking about. Again, the key here is patience. He's not ready to start, so give Doug Marrone time to work with him and correct the flaws. There's an NFL player here. Even if it takes Kouandjio a while to begin his NFL career on the field, the fans might be placated if Henderson and Richardson keep playing like they have been - and before we know it, they could be starting.