The Buffalo Bills made two big plays on offense, in overtime, to beat the Chicago Bears in Week 1. Here's how those plays happened.

It's been a great week for the Buffalo Bills. Good news on all fronts, and topped off with a thrilling road win over the Chicago Bears in overtime. Today, I wanted to look at the two big plays that got the Bills down the field to help set up the game-winning field goal.

It was 2nd and 10 on the Bills' 35-yard line. Buffalo lined up with three receivers to the right, with C.J. Spiller in the backfield and Scott Chandler on the left as a tight end. This was mainly a run formation for the Bills throughout the game, and was a formation I had rarely seen from the team before Sunday. 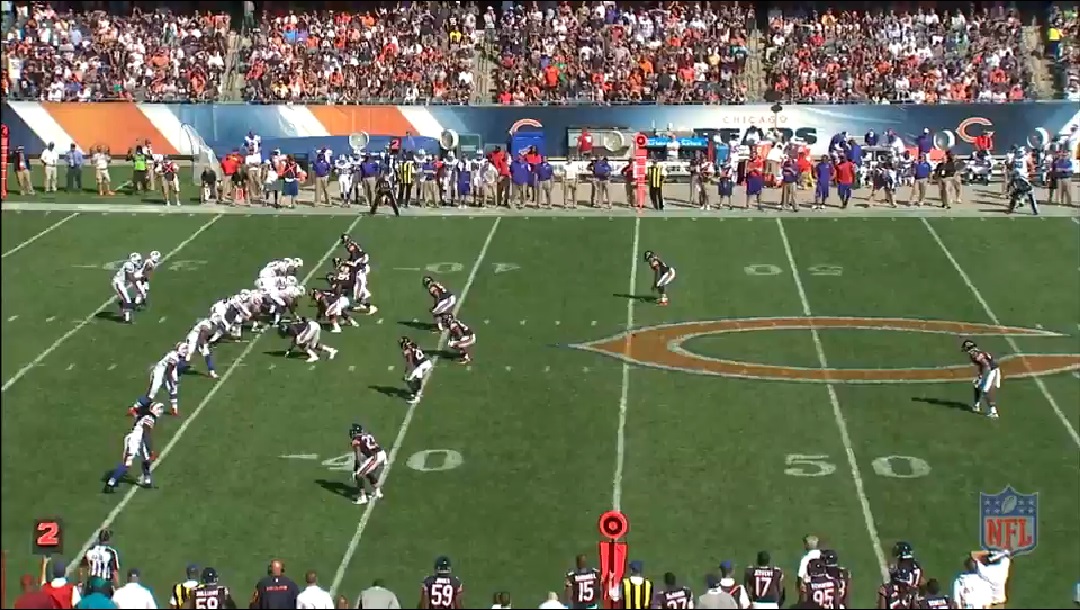 This is a vertical pass play, and features the throw that Manuel tends to throw best in my opinion, the seam (or skinny post). If you remember, Manuel hit Williams on a similar pass in the preseason. Manuel is reading the safeties and throwing away from them. The Bears are in a two-deep look here, something they rarely ran on Sunday. 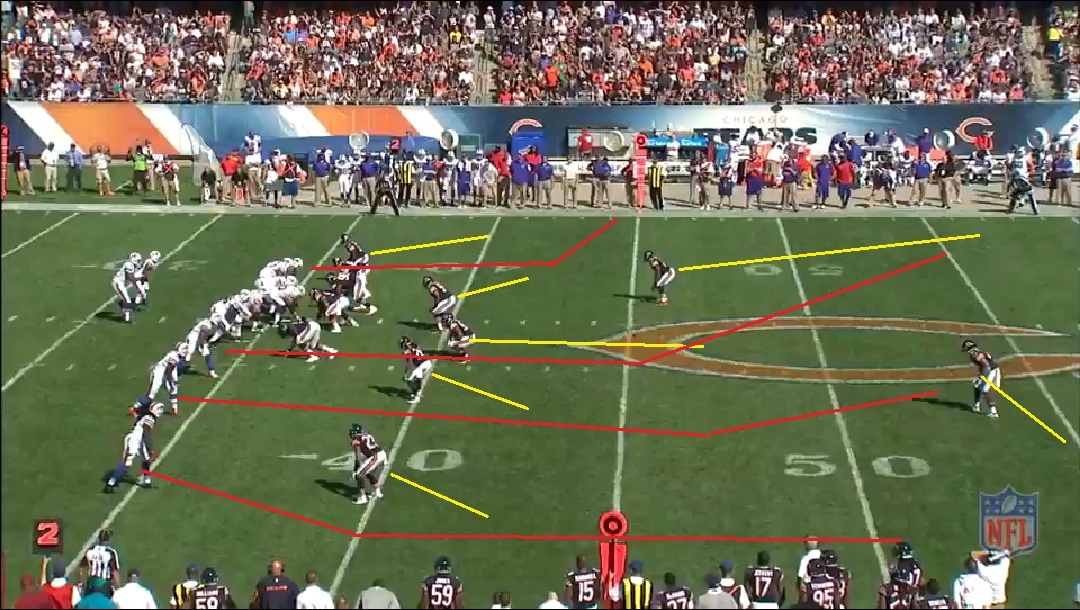 There was actually a slight problem with this play that never ended up mattering. Sammy Watkins gets jammed quite well off the line of scrimmage and never really gets into his route to threaten the safety to the outside. The picture below shows Manuel releasing the ball and throwing it into an open space, where Williams can go up and get it. Throwing receivers open was one of my main criticisms of Manuel last year. It is really what separates the good quarterbacks from the bad in the NFL. I am sure it was something the Bills have worked with him on, as he did this successfully a few times on Sunday 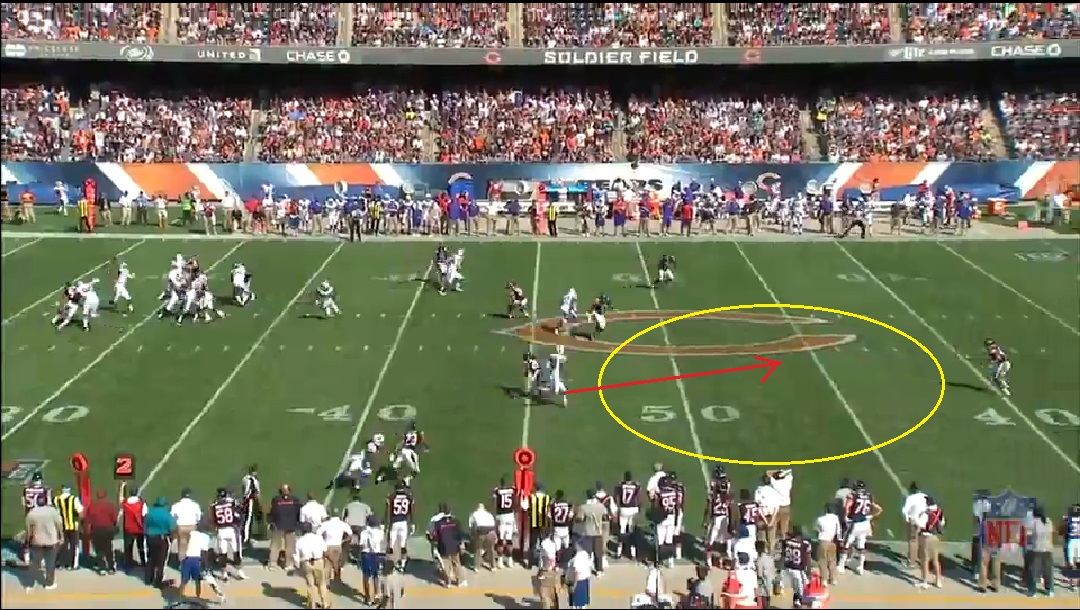 Here is the play in GIF format.

Two plays after the Williams catch, we have the play that sealed it, Fred Jackson's 38-yard run to the Chicago one-yard line.

What is most interesting to me about this play is that the Bears had the extra man in the box to stop the run. There are seven defenders and only six blockers. 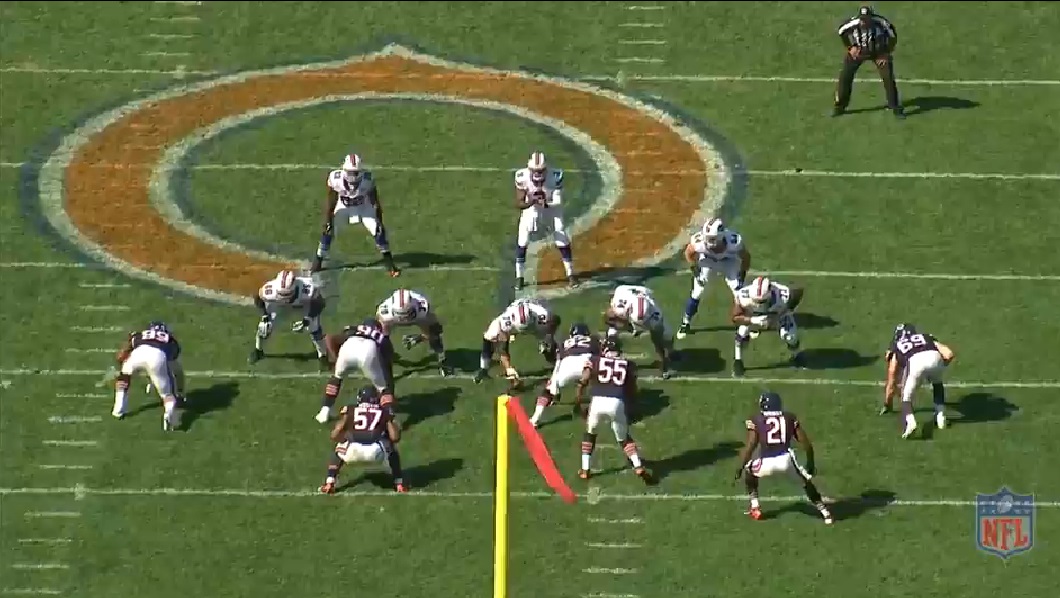 This is your basic split-zone running play that the Bills run all the time. You get double teams at the point of attack, with the goal of a lineman coming off the double team to get the linebacker at the second level. Then, the tight end comes back across to kick out the end man on the line of scrimmage for a possible cutback lane. This is one of the bread and butter run plays for any team that uses these types of shotgun runs. 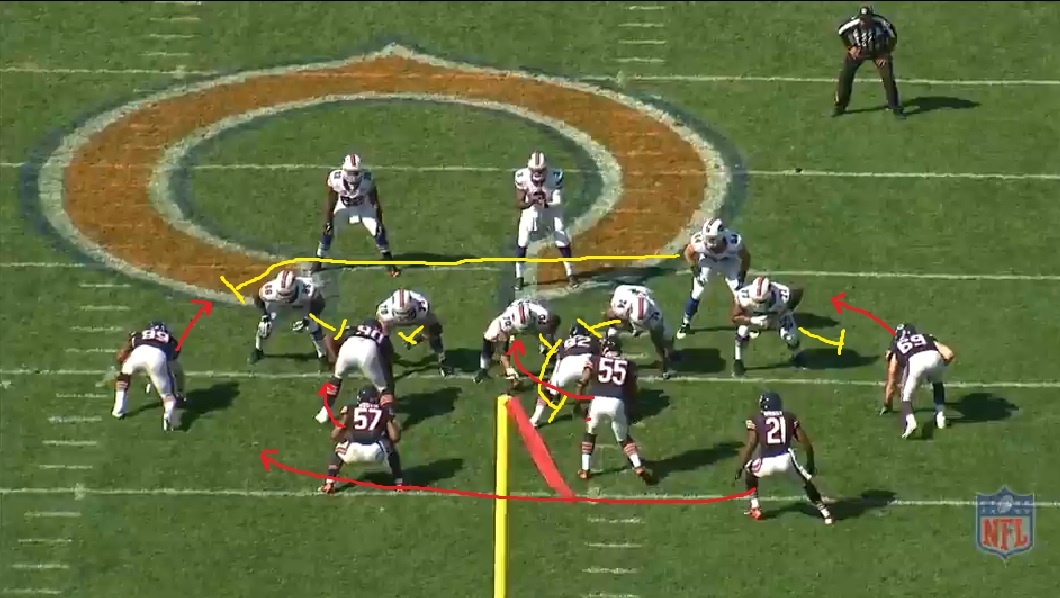 What happens here is some really bad over pursuit by the Bears, and a really great play by Eric Wood to stop Lance Briggs from blowing things up. 57 and 21 both followed the action to their left, and Briggs (55) tried to shoot the gap up the middle. All of this, combined, left a huge hole to the right. I have no idea what the Bears' gap assignments on this play were, but to my eye, it appears that Briggs (my guess) or 21 should have had that gap, but neither of them did. 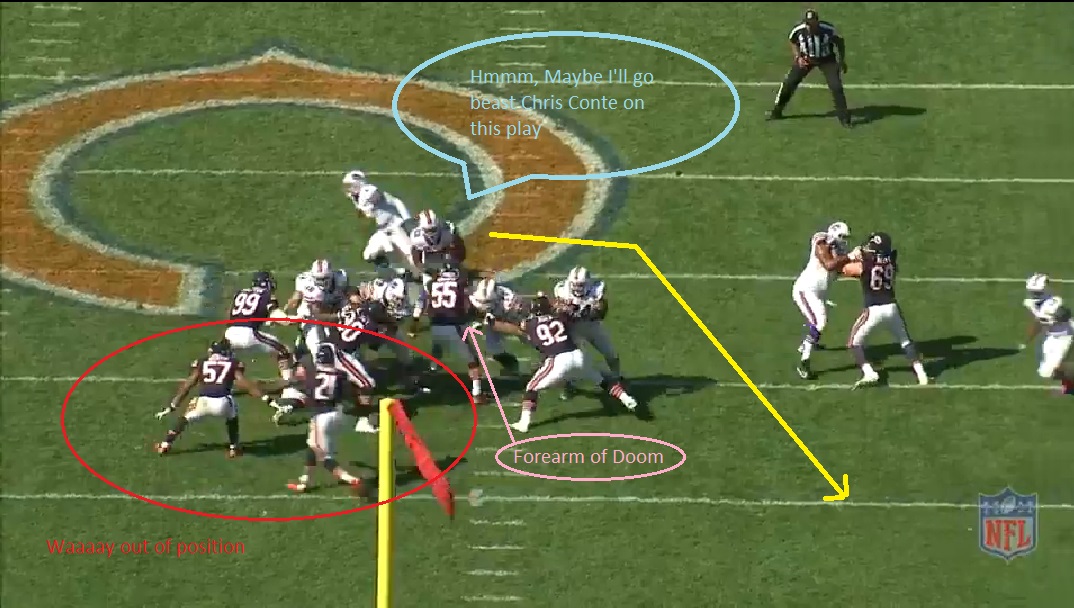 For more enjoyment, here is a GIF of Jackson stiff-arming Chris Conte to the ground.

All in all, this game reminded me of a Dick Jauron-era win for the Bills (please don't hate me for saying that). The defense forced a few turnovers and didn't allow very many big plays, while the offense avoided mistakes and had a sound conservative game plan with a couple wrinkles that aided the Bills in their victory. Avoiding mistakes and making a couple plays is a good way to win in the NFL with a young quarterback. Here's to hoping Manuel can keep up the consistent play in the upcoming weeks.

I know one thing: this Miami game is going to be a lot tougher than I thought before Sunday... they were quite good against the Pats.